I already had a post from a flurry of work on the Scamp that I titled Reflections, but I needed the title again for this post, thus Reflections2.

Friday was a day I'd tried to avoid, desiring to sneak out while no one was looking, but the boss wouldn't hear of it so they threw a big party to celebrate my retirement. I actually have a couple weeks left but this week is finals and then the faculty are gone until January. I didn't think that it was possible to keep a secret around this place, but they certainly did.

In addition to a video of reflections from faculty and staff, there were many people in attendance sharing their favorite memories. I was amazed at the stuff that I'd taken for granted and often totally forgotten that was seen as meaningful and special to people. While I've been fortunate the past several years to serve a key role in campus master planning and the construction of several buildings, that role wasn't really part of my job description - it just needed to be done. It's apparent from comments that others feel strongly that the campus is a better place - I couldn't ask for more!

My assistant joined my wife and I on several river trips. She clearly had an influence on the proceedings! Our VP of Academic Affairs was a professional musician before he got involved in higher education. He wrote an original song & music titled "On the River" illustrated with pictures she had from our various trips. 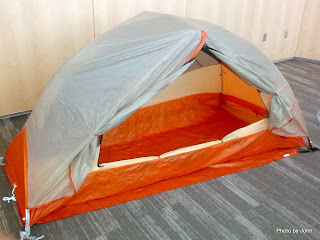 We don't have a history of extravagant farewells so I was especially honored when the campus took up a collection and purchased a new tent to replace the one I've nearly worn out. The Big Agnes Copper Spur 1 tent was the one I've dreamed about, but I wasn't willing to pay the price. I was overwhelmed and look forward to using it often. In addition, other college personnel provided a monetary gift that will become a spotting scope for viewing wildlife, and a GPS for finding our way home from this summer's Alaska trip.

As I reflect on the years with the college system, I continue to be amazed at the opportunities it provided.  I started as a faculty in a new Aviation Maintenance program and expected that would always be my role, but instead I've had unanticipated opportunities in curriculum development, faculty leadership. process improvement, and IT leadership in addition to the past nine years as a campus leader.  It's been a wonderful time that has positively impacted many lives but now it's time to find our way to the next chapter.
Posted by Just Finding Our Way at 5:33 PM