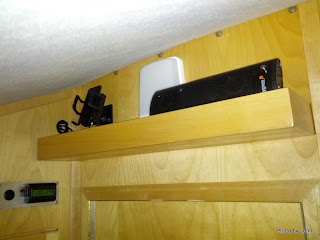 When I built the shelf over the bathroom door in the Scamp, a wise friend suggested I might consider a light under the shelf since the shelf casts a shadow. I noted that I'd designed the shelf to assure access to the switch for the existing light specifically so that I wouldn't have to move it. 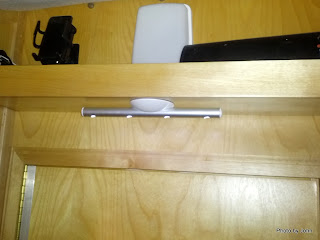 I figured that would be enough, but BJ decided that while the light was adequate, access to the switch when coming into a dark trailer at night was inadequate. I investigated locally available 12 volt or battery operated lights and decided to give this one from Sylvania a try. It's not the one suggested by the friend, but I like the looks of it better in this exposed location. 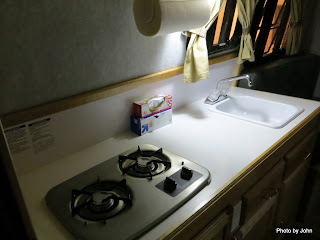 The very first mod to the Scamp was the installation of a paper towel holder midway between the stove and the sink. It has worked quite well for over two years but had an unintended consequence. It shades the 12 volt light from the stove. 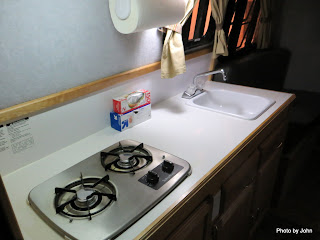 The wise friend had recommended a 12 inch, 12 volt florescent fixture and I'd located something similar. BJ and I liked how it fit behind the frame of the upper cabinets over the stove, hiding nicely while relieving us of practicing braille cooking. The wise friend, in suggesting an option for one mod, improved two. Thanks, Bob.
Posted by Just Finding Our Way at 3:28 PM