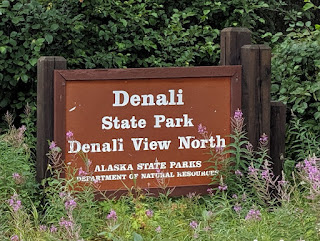 We had a concept of spending one last long weekend camping with the Alaska Contingent, but the best laid plans assumed that an early start would snag a couple sites at a new, very popular state park. We were early, but available sites there weren't, so we continued to another spot they'd mentioned and sent a SPOT message since there wasn't any cell connectivity. 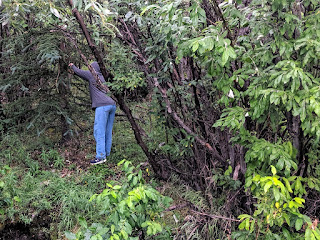 When they didn't show up, we went in search of cell phone connectivity. Along the way, we also searched for some geocaches "for BJ" who'd decided she was going to take a crack the summer geocaching promotion after all.

When we finally made contact, we discovered that they'd had some other issues come up so we made some new plans on the fly. 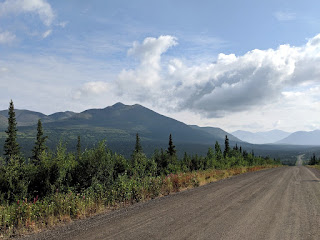 We found a basic, but very comfortable RV Park in Cantwell because it had rained all night and it was cool. I wanted to make sure our batteries were totally topped off before we got to our reservations in Denali since we'd be living on batteries for four days in a wooded campground there. With a place to park and charge taken care of, we headed out to explore Denali Highway. 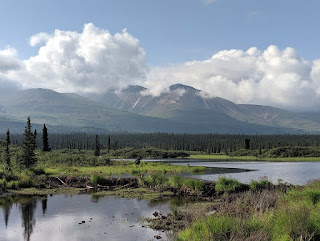 Denali Highway is 125 miles of gravel from Cantwell on the west to Paxson on the east. I'd planned for us to drive it six years ago when we were up here, but those plans were waylaid by the dog munching incident, so this was our chance to explore. We found beaver ponds, complete with swans that swam out of sight before we could get a picture. 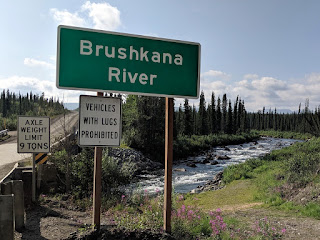 We found some interesting creeks and rivers, 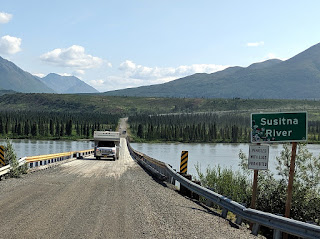 one notably larger than the others. Along the way, we also found a number of geocaches, moving BJ (and I) further in our quest of completing the annual geocaching summer promotion. We honestly hadn't expected to go as far as we did, and our snacks were dwindling when we spotted this sign. Once again, our (my) geocaching habit brought us to a place we might not have found otherwise. 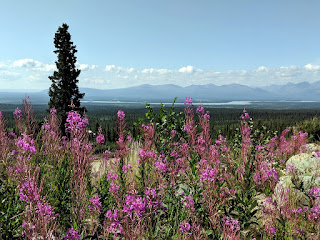 The Alpine Creek Lodge is located just about midway between Cantwell & Paxson and is open year around. They have an incredible view, especially on this beautiful day. So much for the rain, cool, and overcast that was forecast. 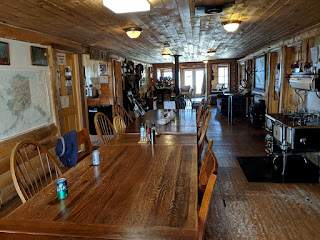 The central portion of the lodge is given to a family style dining arrangement. 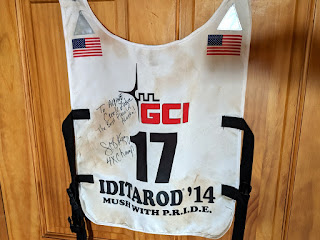 The doors are decorated with musher's bibs, including this one signed by Jeff King. 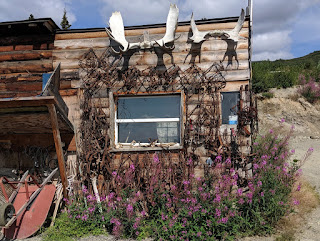 Outside, hanging on the shed was an assortment of traps, waiting for winter to be put back to use. The hamburgers that we had were excellent as was the conversation with the gal running the cafe. 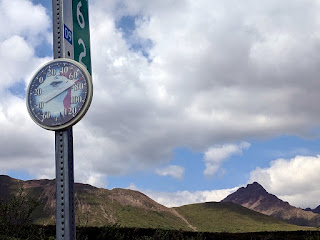 We went just a couple miles further to get to the midpoint of the highway where we found a thermometer on the milepost sign. It said 72, but felt warmer. 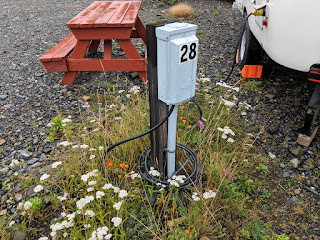 When we got back to Cantwell, we were glad we'd decided to spring for an RV Park. Not because we were concerned about lack of sun for the solar panel, but because we could use the air conditioner!

It wasn't what we'd planned, but it really was an excellent weekend to kick off our southbound (eventually) journey.
Posted by Just Finding Our Way at 2:30 PM