It Makes Me Wonder 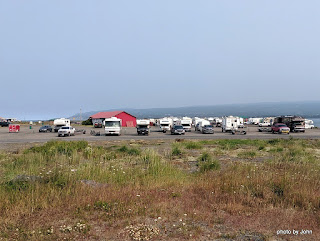 While we were in Homer, BJ noted that there was a cache a couple hundred feet away from where we were 'camping' at the Fishing Hole parking lot.

I hadn't paid any attention to it because I'd logged it four years ago when Spencer was introducing me to geocaching. It was the second geocache I ever logged.

When I looked at the cache description, the latest log entry said that finder had dropped a trackable in the cache, BUT the cache inventory didn't list it. That was enough to get me off my keister to walk over to the red building to see what we might find. 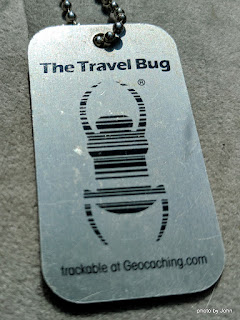 Sure enough, the Travel Bug was there, but when I looked it up, it was shown as still in a cache in California. This TB intrigued me for several reasons. Not only had the person who dropped it in this cache not logged the TB properly, they'd also inappropriately listed the TB's actual code in their cache log entry. The name, Sgt Mike's Tag, and its goal (To get as far away from Kansas as possible) led me to look closer at its history.

The TB's namesake gave the TB to someone to take to Arizona without first dipping it where ever he was at the time, so the travel history starts in the Yuma, Arizona area where it never goes far for bit over a year before it stops traveling at all until this year when someone else grabbed it, took it to Vancouver, Canada and then back to California where the most recent person picked it up without logging it and dropped it in Homer. 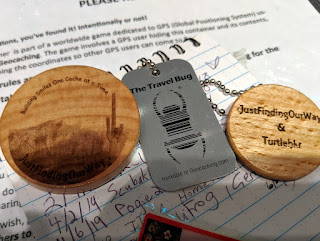 After making some log entries to get the TB to the right place, we decided to move it to a location that didn't attract a lot of traffic, but did seem to have a notable number of international visitors and most of the cache visitors seemed to be more experienced, in hopes that this one would finally get moved in the direction that the TB owner desired.

End result? It got picked up, taken to Ohio, and dropped in a new cache under a shrub in a park.

There's lots I wonder about, but I really wonder about what happened to Sgt. Mike. Seems he wasn't a fan of Kansas, but I wonder where he went and if he survived. His last finds were in Kansas in May of 2015. I hope he's safe and healthy.
Posted by Just Finding Our Way at 2:30 PM

Email ThisBlogThis!Share to TwitterShare to FacebookShare to Pinterest
Labels: Geocaching