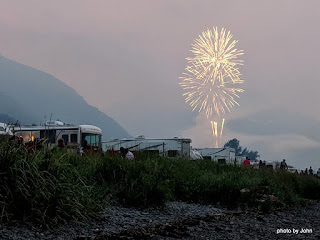 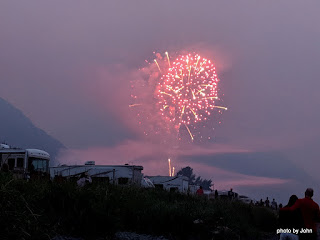 We only had to walk about 100 feet from our trailer to have this view from the beach. A number of boats were out to watch as well, but had to move when the fog moved in. Between the fog and the smoke from the Swan Lake fire, I didn't have any luck getting any sharp pictures. 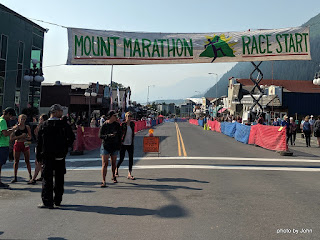 For over 100 years, the Mount Marathon 5K race has been an integral part of their 4th of July celebration. The youth race was cancelled because of air quality, and adult entrants (it's very tough to get one  of the 700 adult bibs) were allowed to withdraw and hold their spot for next year if they chose. Even so, there were lots of people in the race. 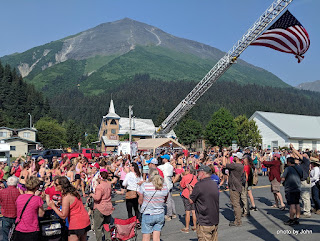 The first (of two) wave of the women's race started at 11 a.m. Billed as the world's toughest 5K race, they start downtown, headed for the racer's trailhead, and then race to the peak of the mountain at 3,022 feet, and then run back to town. The fastest runners finish in less than one hour. 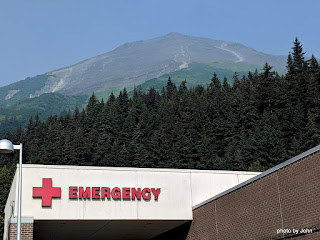 I rather thought that the hospital was appropriately placed, just a couple hundred yards from the runner's trailhead. 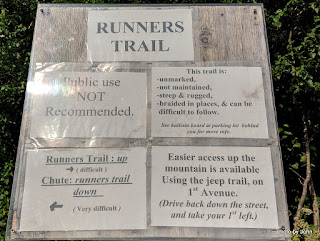 A couple days after the race we walked out to check out the trailhead area. The runners trail (up) started with a very tight and low tunnel through the brush. The route down was the face of an avalanche chute.

It doesn't look like much, but like all photos, you can click on it to get a larger version. In this case, a large enough version to read the notes about the various sections in case you think this is something you'd like to do with your family and friends.

There are lots of videos about the race. I liked this one, narrated by in part by Fred Moore, a man who ran it for the 50th time this year. 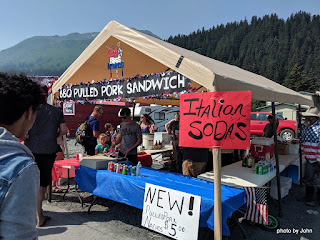 While the women were running up the mountain and back, we visited some essential vendors. Unlike so many places, they still allow homecooked food here. An excellent pulled pork sandwich with chips and a drink for $10 as a fund raiser (for the Boys & Girls Club as I recall). 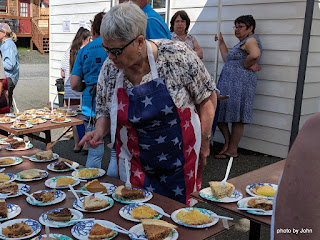 The Methodist chuch had pie with ice cream and coffee for $5 while the Catholic church was advertising their chicken dinner. I think it was the VFW that had ribs. 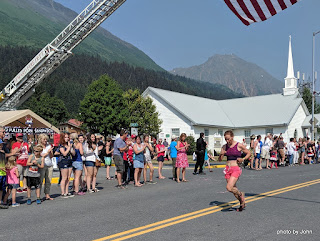 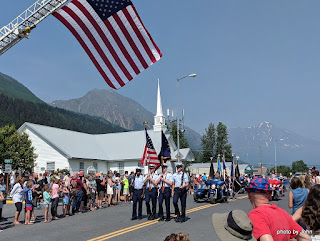 At 1 p.m. the parade started. We just lucked into a spot in front of the fire station because there was a low wall to sit on. Turns out it was a great spot for the parade as well as watching the upper part of the mountain. 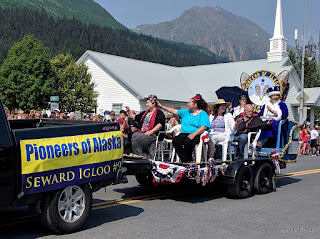 The Seward Igloo of Pioneers of Alaska had a place of honor in the parade. 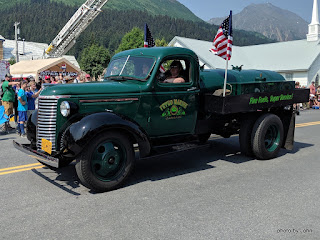 Petro Marine had several restored trucks in the parade, 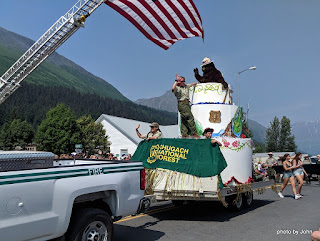 and Smokey the Bear was there as well. There weren't any horses or marching bands or cheerleaders in the parade, but SeaTow had a boat in the parade. 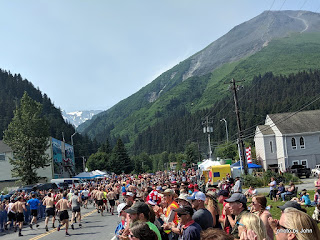 At 2 p.m., the men's race started. We were a bit late getting back from the trailer where I'd gone to get the binoculars, so this picture is taken from a different position after the race turned west and headed towards the mountain. 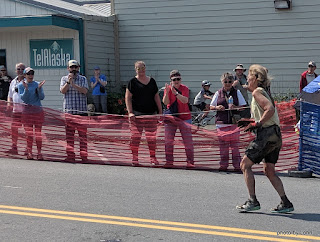 During the parade a few women came through, and after the men's race started there was still an occasional racer come through from the women's race. Just to complete the race was amazing to see. It's worth looking at a larger version of this picture to see the amount of mud on her back. That was quite common to see with both the women and the men. 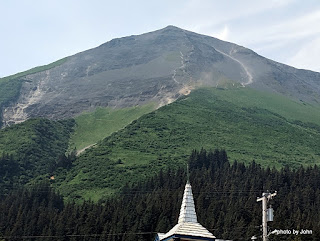 Unlike some years where there might be snow or mud, this year the mountain was dry so you could watch the progress, especially on the downhill, indicated by the clouds of dust in the avalanche chutes. 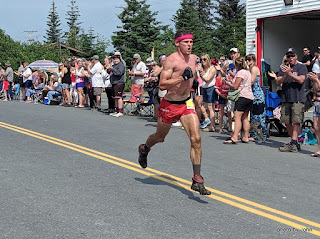 Max King of Bend, Oregon was the men's 1st place finisher in 43 minutes 39 seconds. His time to the top was about 34 minutes.

We hadn't planned to be in Seward for the 4th, but knew we'd need to snag a spot early. We ended up spending a wonderful week in Seward and especially enjoyed the small town vibe.