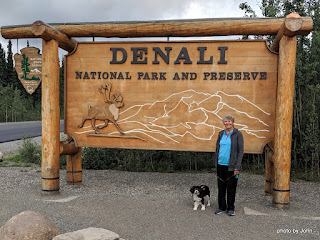 Last time we visited Denali, we had wet weather and our time was consumed with dealing with Turk's trauma. This time we scheduled four days in hopes of getting a nice day in the mix. 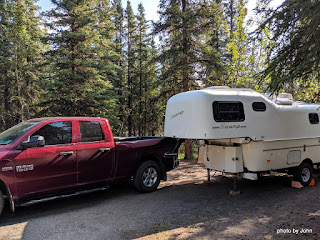 Campsites at Riley Creek are reserved by size. We hit the jackpot when chatting with another fiberglass trailer owner as we were checking in. He told us about the site he'd just left and we were able to snag it. I was expecting that we would have 4 days with no gain from the solar panel, but we got enough light through the trees to offset more than 1/2 of our utilization leaving us with lots of power cushion. 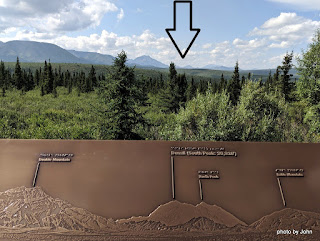 After setting camp the first morning (arrive early for better choices!) we went out to see if we could see the mountain. It's supposed to be "right there" but not so on day 1. 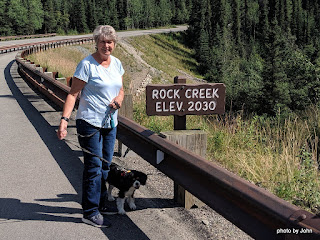 The weather, however, was shirt sleeve warm that first day. 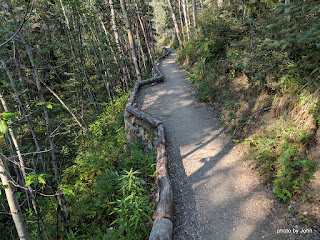 On day two, BJ went for a bus ride inside the park while I nosed around the local area. The paths are beautiful, but with the exception of the "roadside trail" and the campgrounds, Turk was not allowed on the trails. 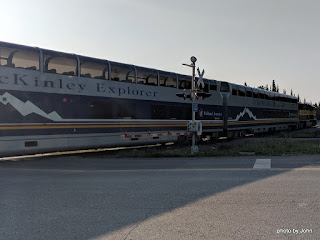 Timing was right to see what one of Riley Creek Campground's noise sources was. It doesn't pass by often, but Holland America / Princess's McKinley Explorer does stop at the park's railway station.

Meanwhile, BJ didn't see the mountain but did see some animals, but none close enough to photograph. 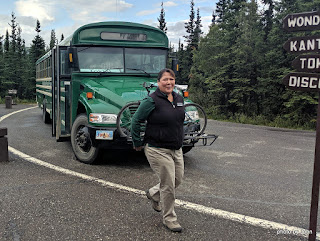 On day three, it was my turn to ride the bus in search of the mountain. My driver works on a crew building and maintaining ice roads during the winter. 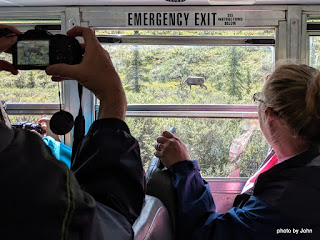 We saw a number of caribou, usually with elbows and arms framing the view. We also saw a solitary brown bear and a moose cow & calf. 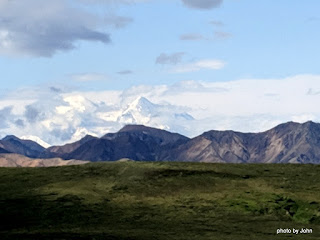 The picture's not great since I had to do a LOT of cropping, but Denali cooperated with us for a little bit, sneaking out from behind the clouds. A bit further down the road at a "better" viewpoint, it was totally obscured. 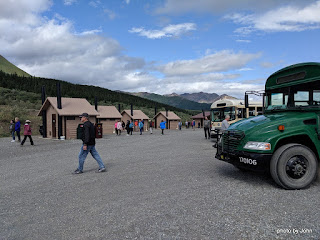 Of course, the bus stopped for all sorts of nature.

Day four of our time in Denali we wandered to downtown Glitter Gulch where all the tourist shops and large hotels are located because they had a beautiful bike path where we could take Turk for a walk. 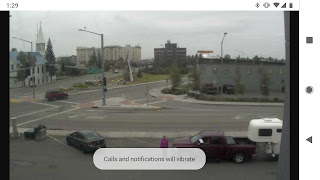 We left the park and continued north to Fairbanks where the pantry was restocked, and we visited Alaska's only webcam cache where we got a screen shot of us and the truck & trailer. It turned out that this was our most northern cache of the trip. 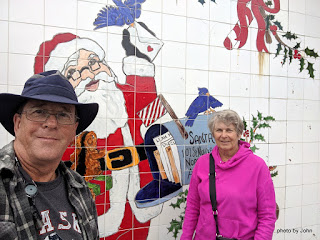 The last important stop in the general Fairbanks area was at the North Pole where we checked to make sure Santa's list was correct.  Now it's time to start progressing south, although we'll occasionally do that by driving north.

Next stop, Valdez.
Posted by Just Finding Our Way at 2:30 PM