After a week in Alaska, it was time to head south. I'd promised my sister that I'd spend a couple weeks in Seattle doing some volunteer consulting for her. Ideally, I'd get a flight out of Anchorage that would match up with their arrival time so that we could combine transportation. Certainly not a bad idea if you're buying tickets, but why buy when you can fly on a pass?

It was very clear, very quickly, that I wasn't getting out of Anchorage any time on the day I wanted or the day before, but a study of the schedules suggested that it might be possible to get out of Fairbanks the afternoon before I needed to be in Seattle, and there were plenty of seats to get me to Fairbanks. With an arrival in Fairbanks about 3 1/2 hours before the Seattle departure, there was only one thing to do when I got there...

I fired up the GPS, grabbed my hand carry, and headed to the taxi stand. The first driver I talked to was willing to do a 30 minute charter so we headed off find a cache. He parked nearby and I wandered off a few feet into the woods and found what I was looking for. Not only did I get a cache that's my personal furthest from home, but I got a really cool complement as well. The taxi driver has been driving taxi in Fairbanks for over four years and he told me that I was the craziest fare he'd ever had. Made my day!

Speaking of crazy, going back to work in an office, even if only for a couple weeks, might be crazy. I woke up several times the first night mulling over possible solutions to the challenges I was reviewing. Just one day and it was like I'd never quit working. Doubt that I'll be making applications for an office job any time soon, even if there are people in my life that think it would be a good idea.

The best part of this volunteer gig is that it's four days a week. I left Kirkland at 3 p.m. on a Thursday, headed for a long weekend in NW Oregon. When I lived in Kirkland decades ago, it was just an hour drive to Tumwater. Now it took three hours of stop and go traffic on the freeway. If it had taken that long then, I likely wouldn't have continued dating the women I married. That's crazy!

In case you're wondering - no, I didn't have any pictures for this post. Told you I was crazy! 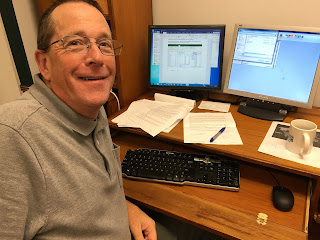 My sister saw the blog post and decided it needed a picture to prove I could actually look semi-professional.
Posted by Just Finding Our Way at 2:30 PM