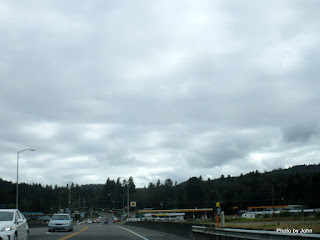 When I was in Newberg, I'd chatted with friends about which way to go back to Seattle. I'd toyed with driving the coast route north from Tillamook, but a visit to Mount St. Helens was suggested as an option. We were out of the country when it blew, and I'd never visited the mountain, so it got the nod. I overnighted in Kelso and then headed east on Highway 504 from Castle Rock the next morning, taking my time in hopes the clouds would clear. 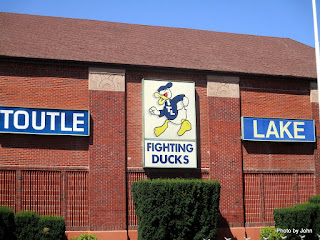 The highway passes through the small community of Toutle Lake where their honor is defended by the fearful Fighting Ducks. Fearful if you're a slug, perhaps. 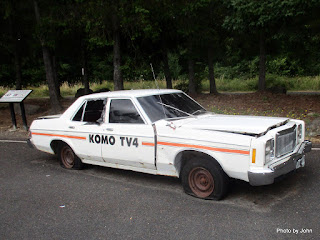 A stop at the Cowlitz County Hoffstadt Bluffs Visitor Center struck a cord with me. As soon as I saw this car I recalled all the news photos of the car, abandoned by Dave Crockett who reported the eruption as it enveloped him.

The Center has some very nice photos of the mountain and of the various Spirit Lake facilities before the eruption. 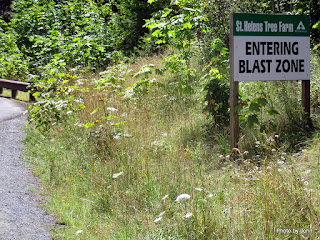 Not far from the County's Visitor Center, I spotted this sign, now hidden behind a roadside bush. I had to go back to get a picture... 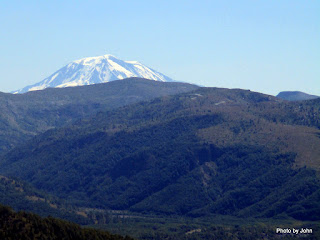 The day was turning out to be clear as the early clouds burned off. 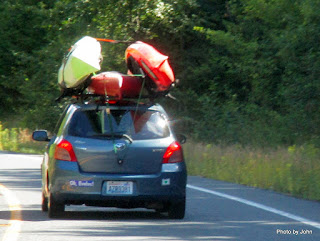 I saw a lot of traffic, in both directions, hauling kayaks. I wasn't sure of the attraction 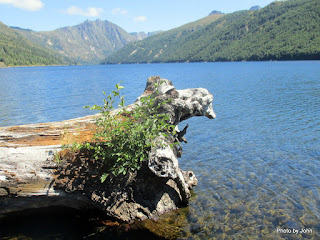 until I got to Coldwater Lake. What a beautiful setting! I immediately wished I had my canoe with me. With the exception of one dory with a single fly fisherman, I didn't see anyone on the lake. 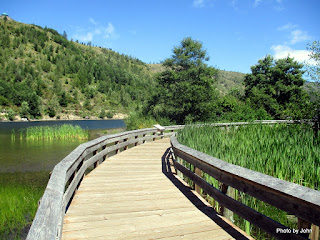 I spent some time wandering the wooden boardwalk that wraps around the shallow end of the lake, complete with interesting info signs about the creation and continued transition of the lake. 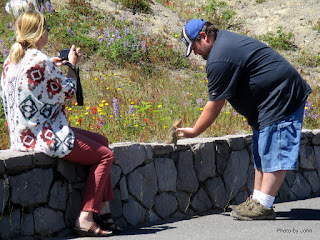 At the Loowit Viewpoint, people were more interested in feeding the ground squirrels than they were with the view. 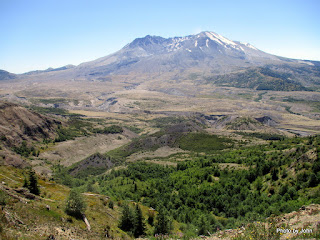 This was the viewpoint where I started to comprehend the scale of the distruction and changes. It was also the point when I realized my earlier view of the mountain may have been the best one of the day. 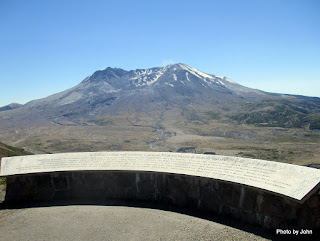 I thought the Johnson Rdge Observatory at the end of the road was well worth the drive. The trail beyond the hilltop featured a memorial to all the people who died in the eruption. 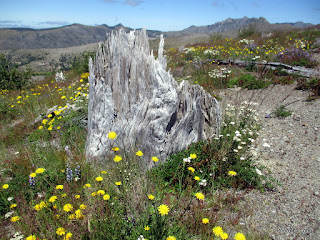 The shattered stumps, now grey with age, tell the story of tremendous force. Much of the blowdown timber has been harvested, but it still lays like match sticks on some of the visible mountainsides.

I'm so glad that I visited, and I'd look for opportunities to return, especially to visit some of the blue pockets of beauty in this amazing place.
Posted by Just Finding Our Way at 2:30 PM