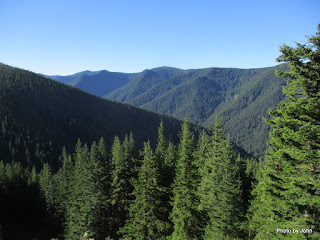 I'd headed to Oregon specifically because I wanted to visit some of the oldest caches in existence. I'd done some homework, but was still surprised to discover that two of the trailheads were accessible on hard surfaced roads. I based out of a beautiful guest room in Newberg for a couple days - the same home where we normally moochdock when visiting with our trailer. 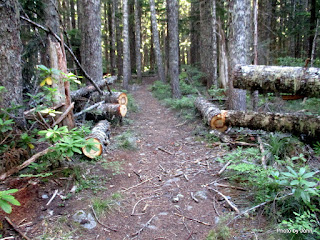 My first target was GC17, a geocache that was originally placed in July, 2000. The Wildcat Mountain Trailhead had plenty of parking. The first part of the trail ducked in and out of cover before circling an old gravel pit. From there, the Douglas Trail was a wide, well maintained trail through the forest with a constant uphill grade. 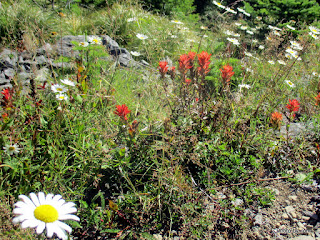 In the open areas, the wild flowers were still blooming. 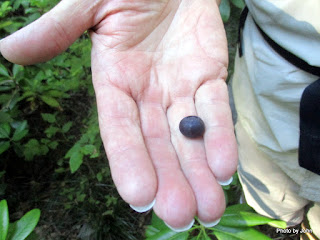 The huckleberries were ripe. In fact, the only people we saw along the trail were busy picking huckleberries. 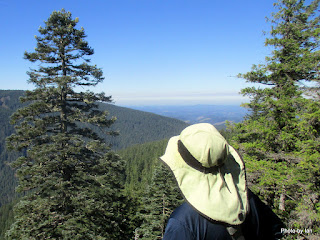 Every now and then along the way, the trail would access viewpoints giving a view off to the west and southwest. 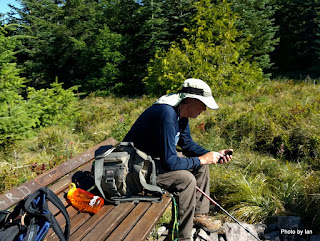 There was a bench near the cache that provided a place to sit while I wrote a logbook entry. The bench was nice, 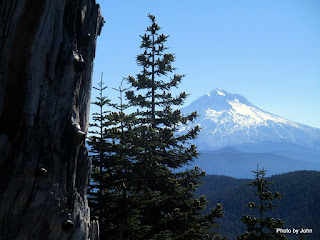 but the view of Mt. Hood from the bench was the best part. This hike was about 2.7 miles, one way. The Douglas trail portion was quite wide. Once we turned onto the McIntyre trail, it became narrower, with some sections somewhat overgrown and other sections narrow because one side dropped off steeply. All in all, it was a beautiful hike. 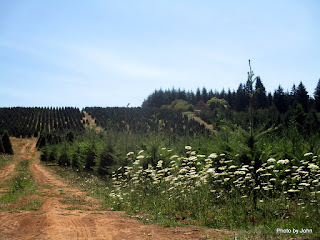 After we returned to our car, we headed across hill and dale, through Christmas tree farms to the big town of Viola. 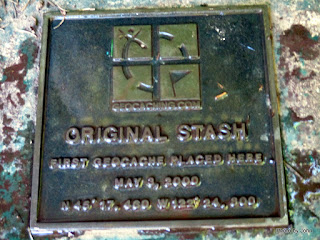 The very first geocache was placed along a public road south of Viola. That cache is long gone, but has been memorialized with a brass plaque (and a replacement geocache). With very easy access, this cache gets lots of traffic. It's really a pretty inauspicious spot for the start of what is now a world-wide sport.

Lots of fun for the first day of chasing old caches.
Posted by Just Finding Our Way at 2:30 PM