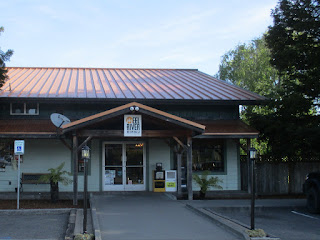 We rolled out of Fortuna, California bright and early, looking to finish out the last of the California section of our shoreline adventure. 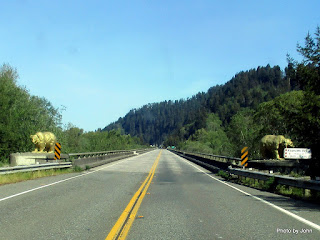 Only in California would they hire golden bears to guard the bridge approaches. Thankfully, I wasn't prepared to include a shot of what we saw at the other end of the bridge. 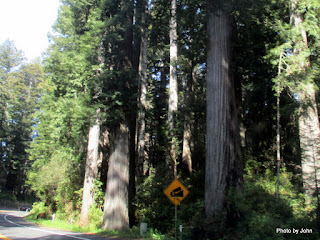 I loved the sections where the big trees (small redwoods) crowded the road. Of course, this section sported lots of those yellow signs as the road would wind up and over each headland. 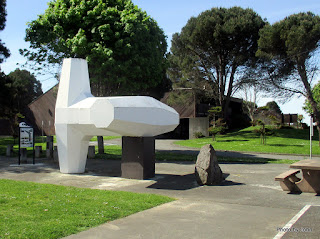 We stopped in Crescent City to check out the massive concrete "jacks" on display. They use these dolosseu and tetrapods to create breakwaters to protect the town. 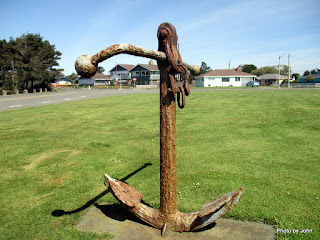 As long as we were off the highway, we stopped at an overlook for lunch and checked out the park across the street. The anchor is apparently from a ship that sunk nearby about about 150 years ago. 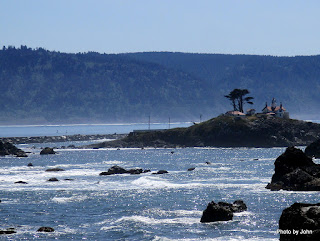 I would have liked to visit the Battery Point Lighthouse, but it can only be visited at low tide and it's closed to visitation on Mondays & Tuesdays - a double whammy for us. 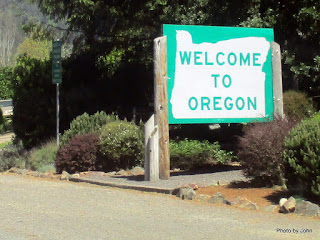 After a week traveling through California without stopping, we were ready for a change of pace. 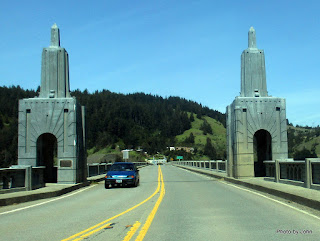 I love Highway 101 in Oregon. So many of the bridges were built in the 1930s and feature Art Deco design. 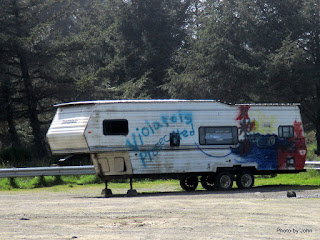 Our plan was to boondock on a piece of BLM land just outside of Coos Bay. It's beautifully situated on the south jetty of the harbor, but... Turns out this past year it has become a very troubled squatter's haven. The squatters have been evicted but derelict trailers remain as does serious warnings by multiple locals that the area continues to be problematic, especially at night. 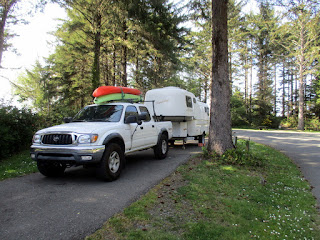 Plan B turned out to be wonderful. On the bluff, less than a mile from our initial destination is a great little County Park. We pulled in to Bastendorff Beach County Park, chatted with the ranger, and paid our $20 for a site with water & electric. 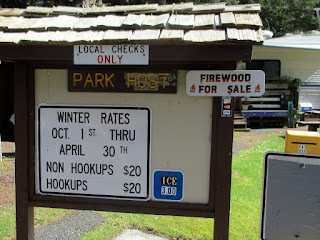 The winter rates last until the end of April, then they go up to $26 for the summer season. The campground is supposed to be reservation only (which uses a system other than reservation.gov) but we had no problem getting a primo space. 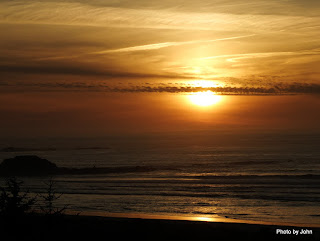 After a beautiful sunset, we decided to stay a second night. Our next move will be to Waterloo County Park for the Northern Oregon Gathering, a semiannual gathering of molded fiberglass trailer aficionados.
Posted by Just Finding Our Way at 2:30 PM