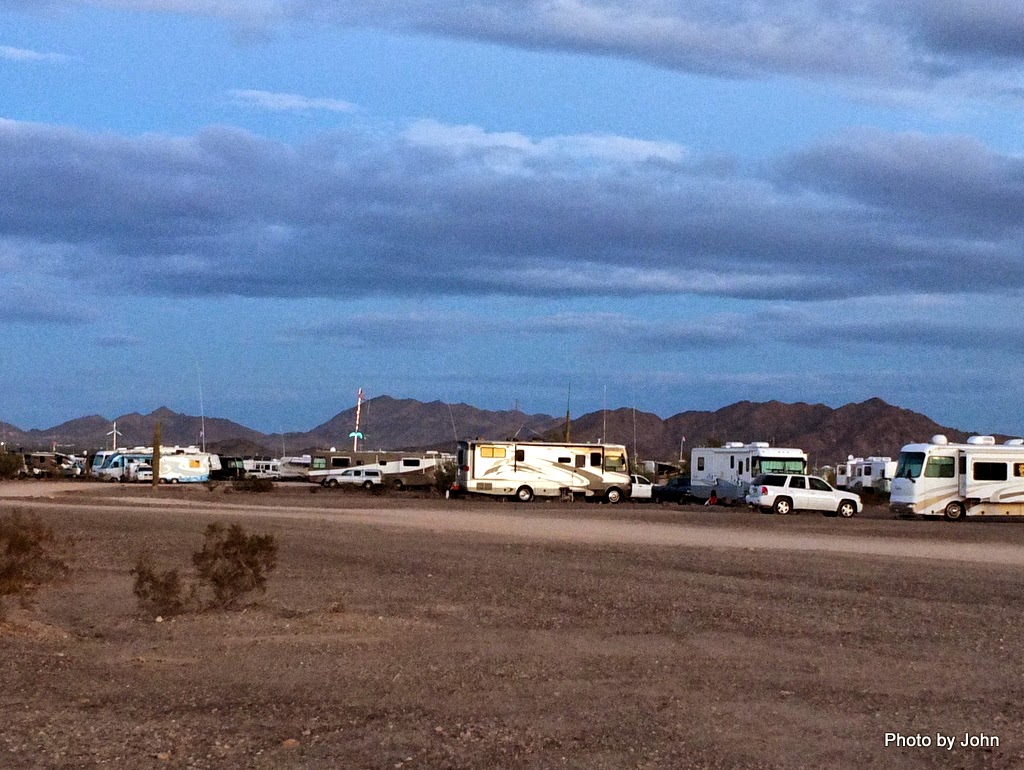 With the new solar panel on the trailer, I needed to get a chance to test it. What better place to test than the open desert of Quartzsite during the “Big Show?”

The Bureau of Land Management (BLM) has designated 6 large tracts of land in the Quartzsite desert for dispersed camping. Five areas are free, and limited to 14 days in a 28 day period. One 11,400 acre area (La Posa) spans both sides of the highway and is divided into four sections. La Posa is designated for long term camping where you can stay from September 15th to April 15th for $180 or for up to 14 days for $40. There are some restrooms, water sources, and dump stations located in the long term area. 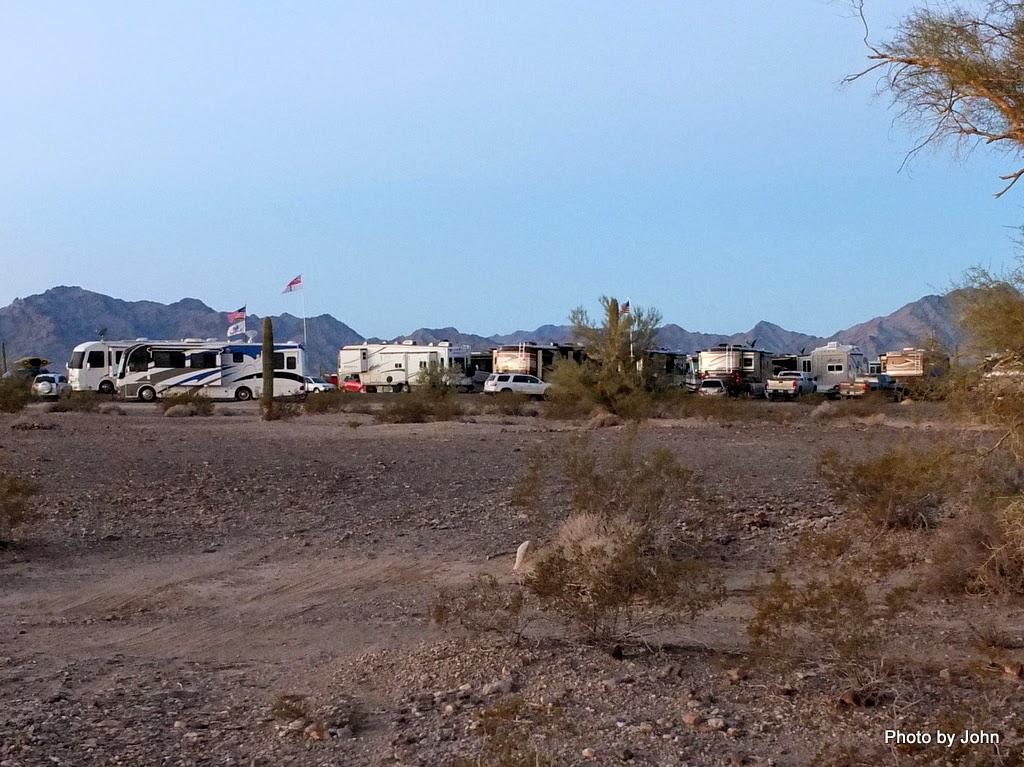 I chose to stay in the Road Runner 14 day area because it wasn’t as crowded as the areas closer to town. 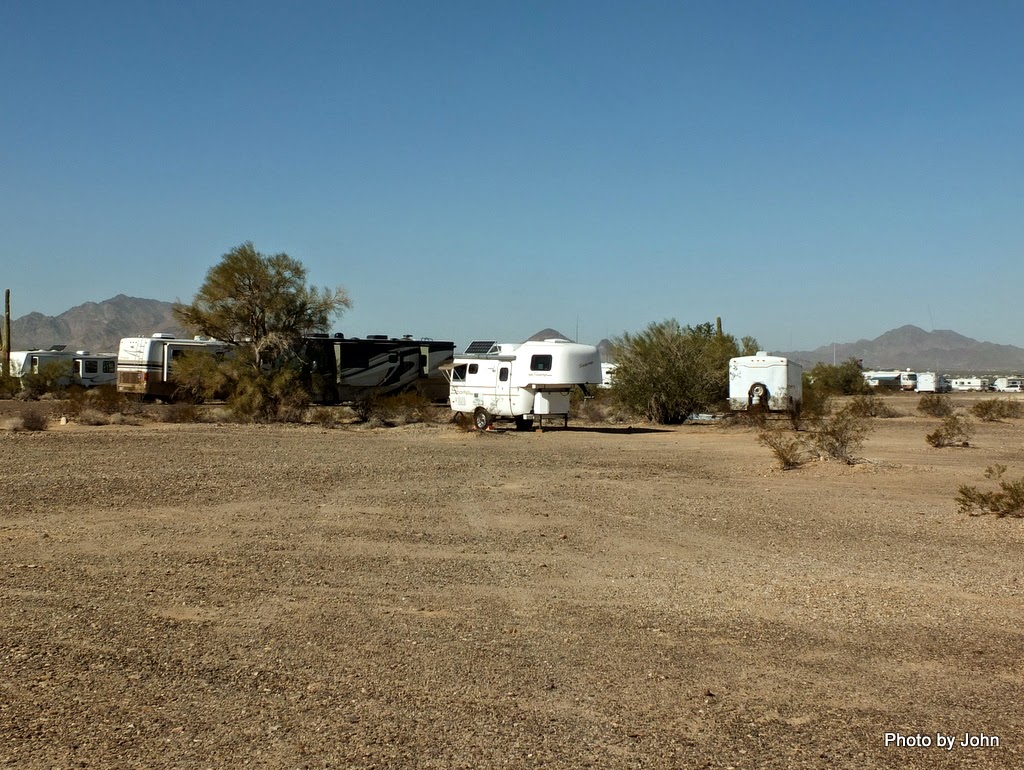 There were areas where folks had clustered tightly, often friends with common interests. I was fortunate to get a spot that was somewhat separated from these busy groups. 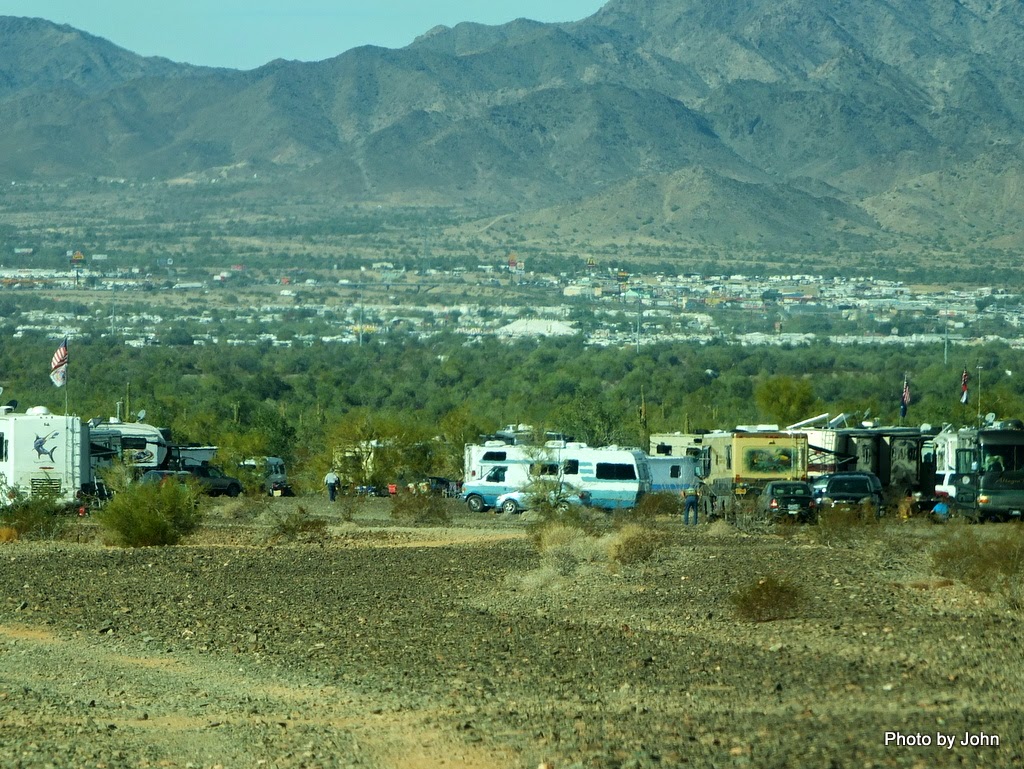 I did take some time to visit a couple other areas. This is the view from the Scadden Wash area with the big tent in the center of the frame and some of the La Posa area near it. It looks a bit more packed than reality since I used a long telephoto lens for this picture. 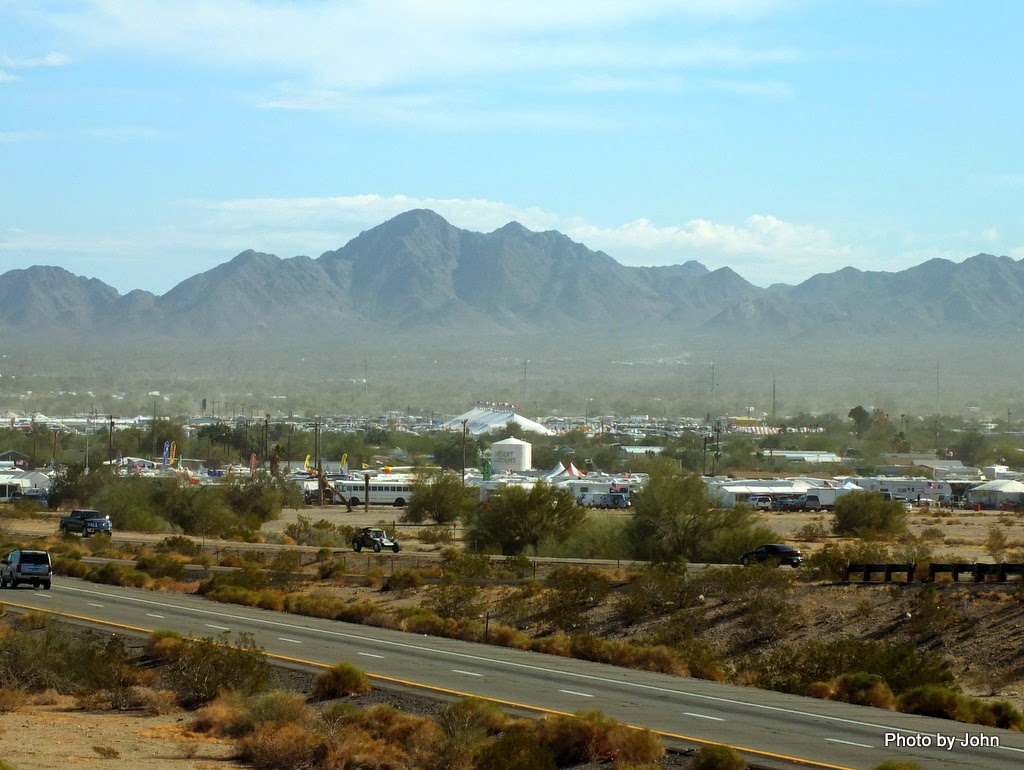 I did visit the big tent first thing one morning. It opens at 9 a.m. and I was there 15 minutes early to get convenient parking which meant standing in line with 50 other people for the doors to open. I managed to tour the whole tent in less than an hour and left with all the money I came with, although from the conversations it sounded like most approached the show with a “black Friday” perspective. This view is from the north freeway overpass, looking south. 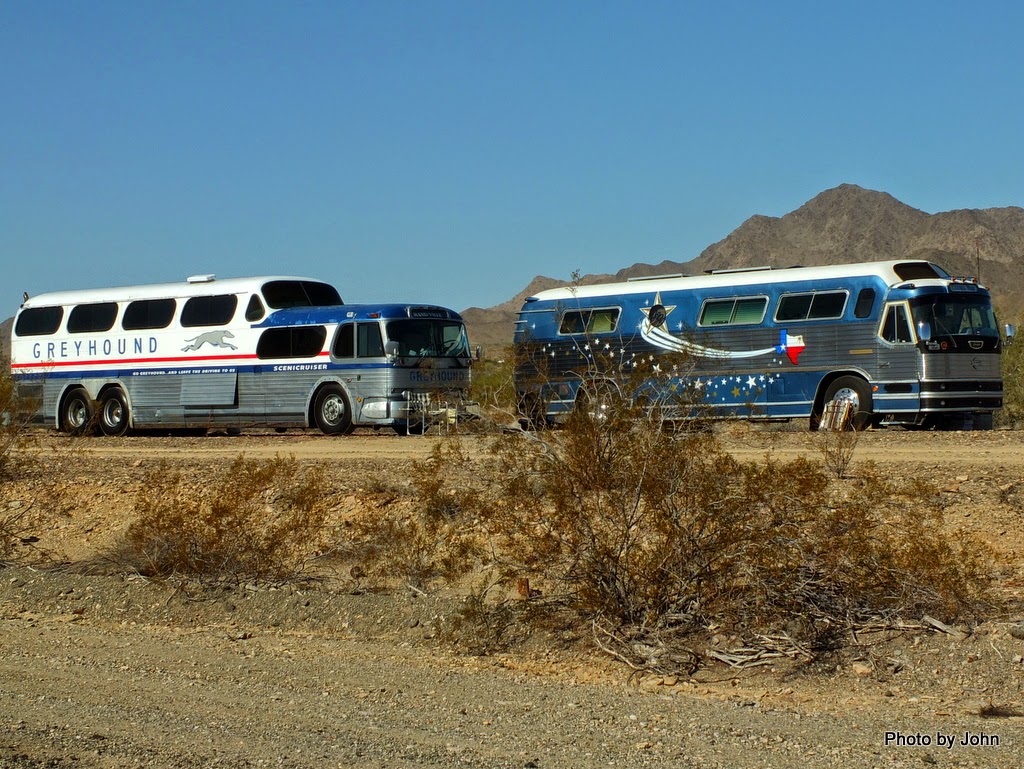 I drove out to the Dome Rock area and found a tight conclave of fiberglass eggs getting a head start on the Gathering scheduled for the first weekend in February. No pictures of them, but I did stop for a picture of my favorite version of the iconic Greyhound. We’ll be back for the Gathering, but first a week at home and a couple minor trailer maintenance items. 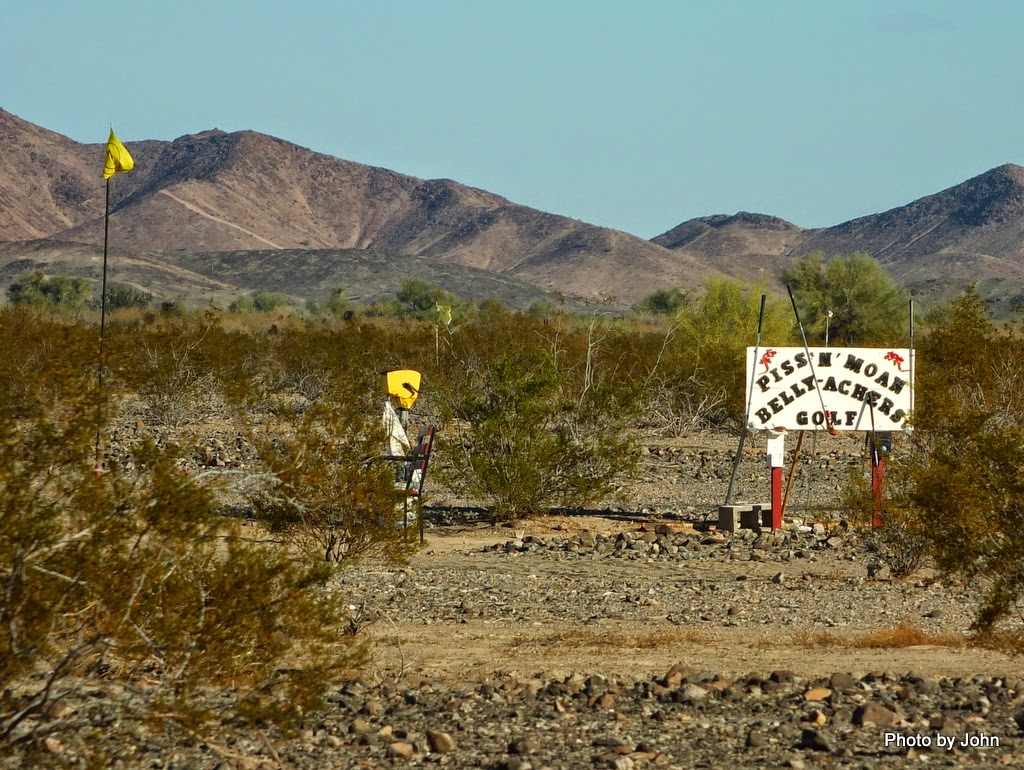 I found the Belly Acres country club while driving around, 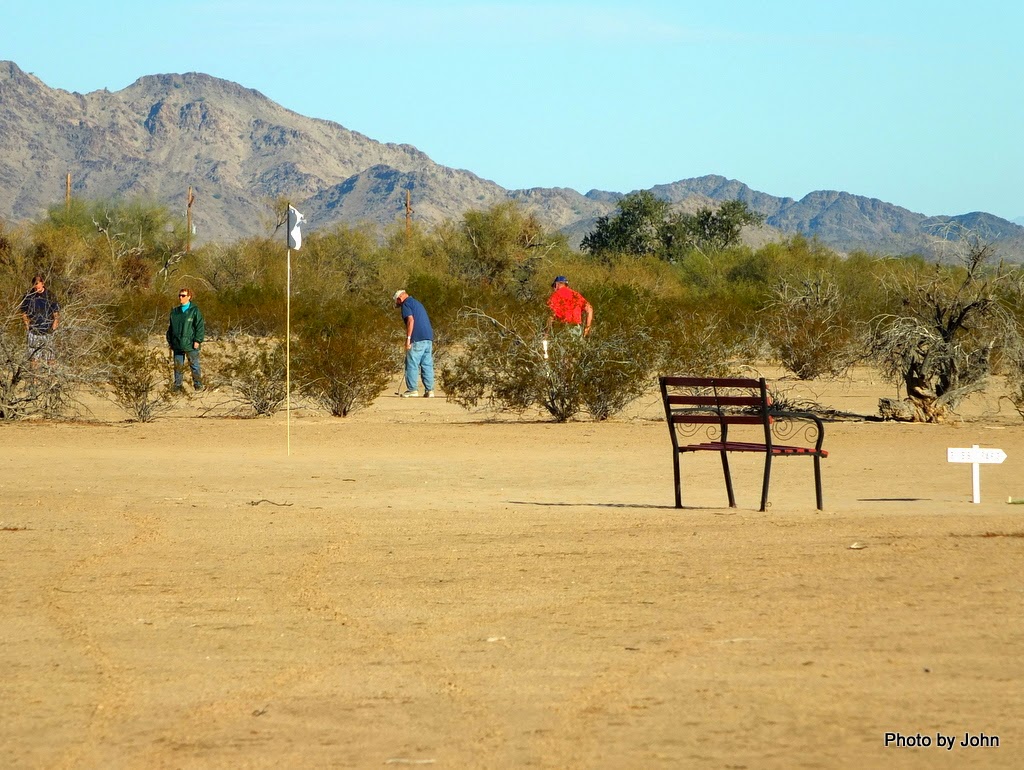 complete with a foursome likely losing bets on the uneven ‘greens.’

Q’s been interesting, and provides lots of opportunity for people watching. I had great fun comparing solar system notes with BJ's cousin and visiting with friends. It would have been nice to stick around a couple more days for a Blogger's gathering, but family was coming to town.
Posted by Just Finding Our Way at 2:30 PM