Gluing a Panel on an Egg 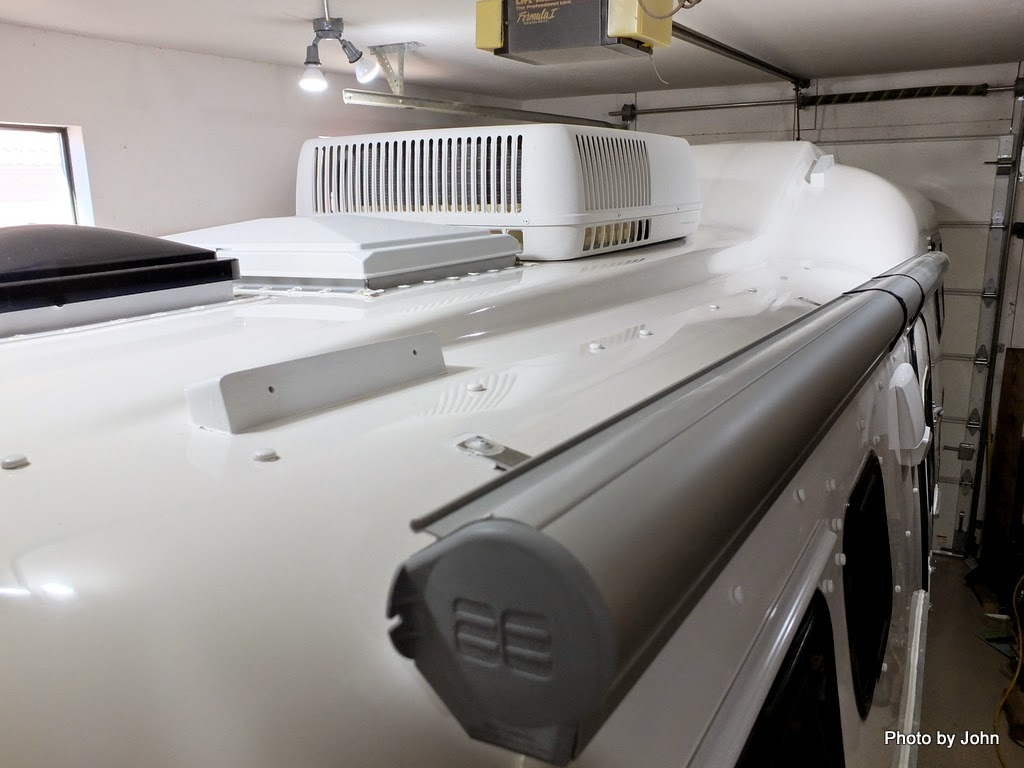 Since our refrigerator is on the street side, our preferred camping orientation is with the door side facing south. While we're not currently using the attach blocks for the canoe rack, I don't want to block them in case we need to use them at some time. That leaves us with about six lineal feet parallel to the awning case, but with the need to deal with the tapering trolley tunnel and the curve of the structure. 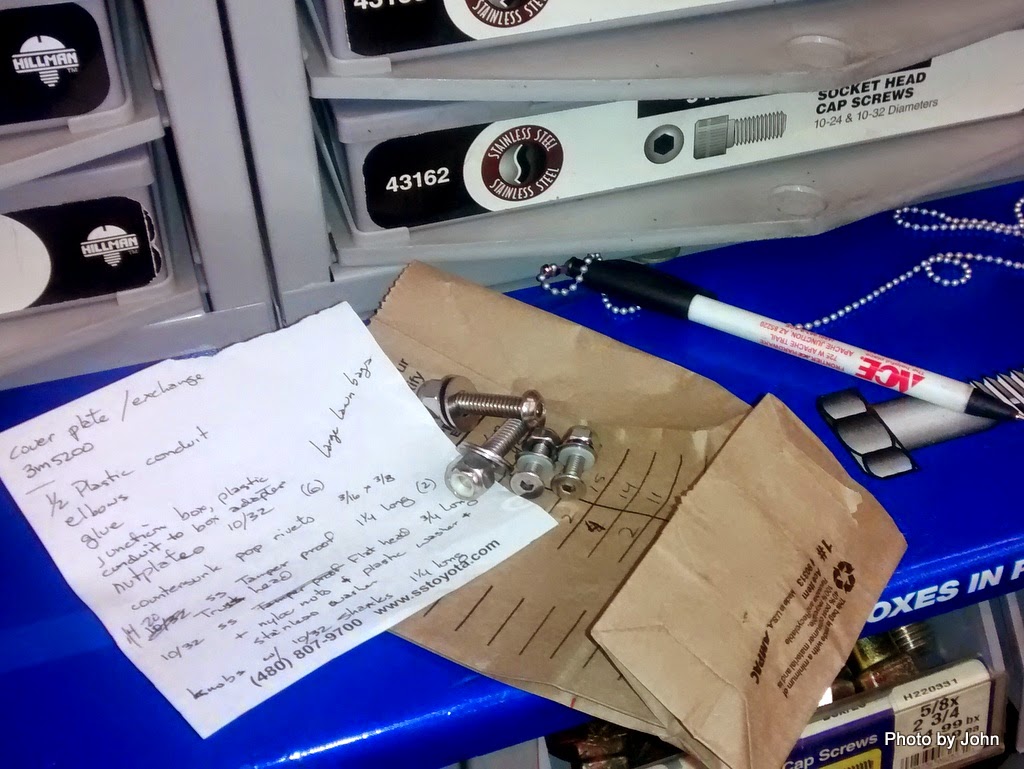 AM Solar makes a wonderful set of stainless steel mounts which will deal with roof curvature, but because of limited space I need to cantilever the hinge points for the panel so their solution won't work for us. I started by picking out hardware for the panel pivot and tilt bar pivot and then snagged the last two hand knobs the local Ace Hardware had with 1 1/2" long threaded shafts. 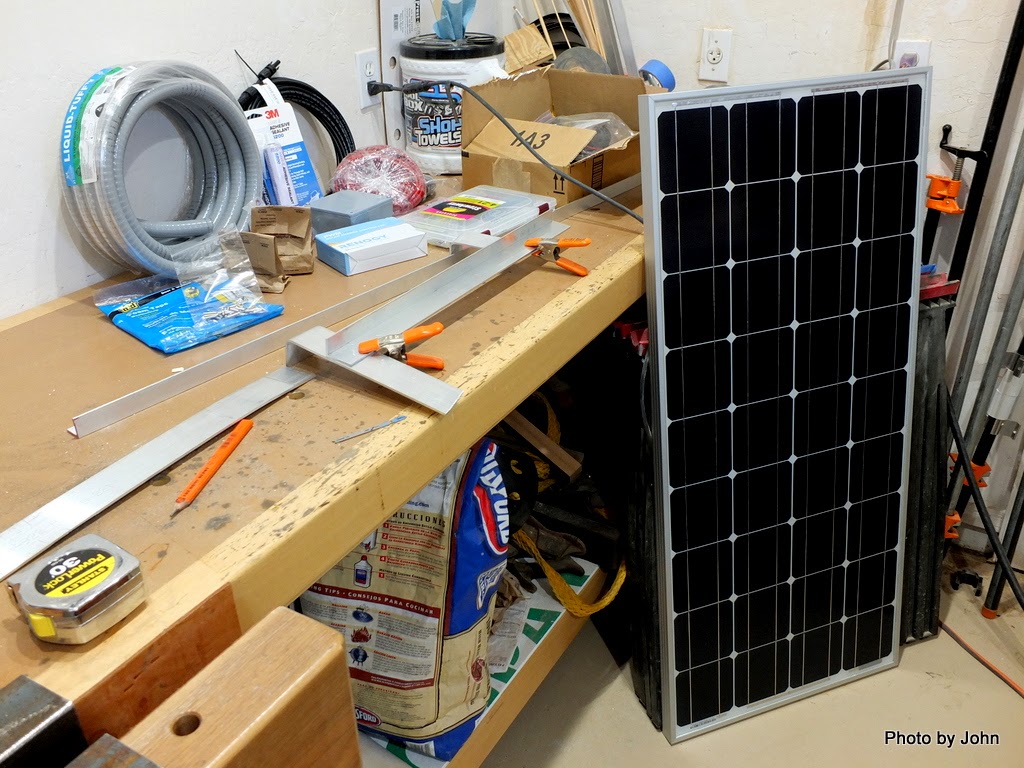 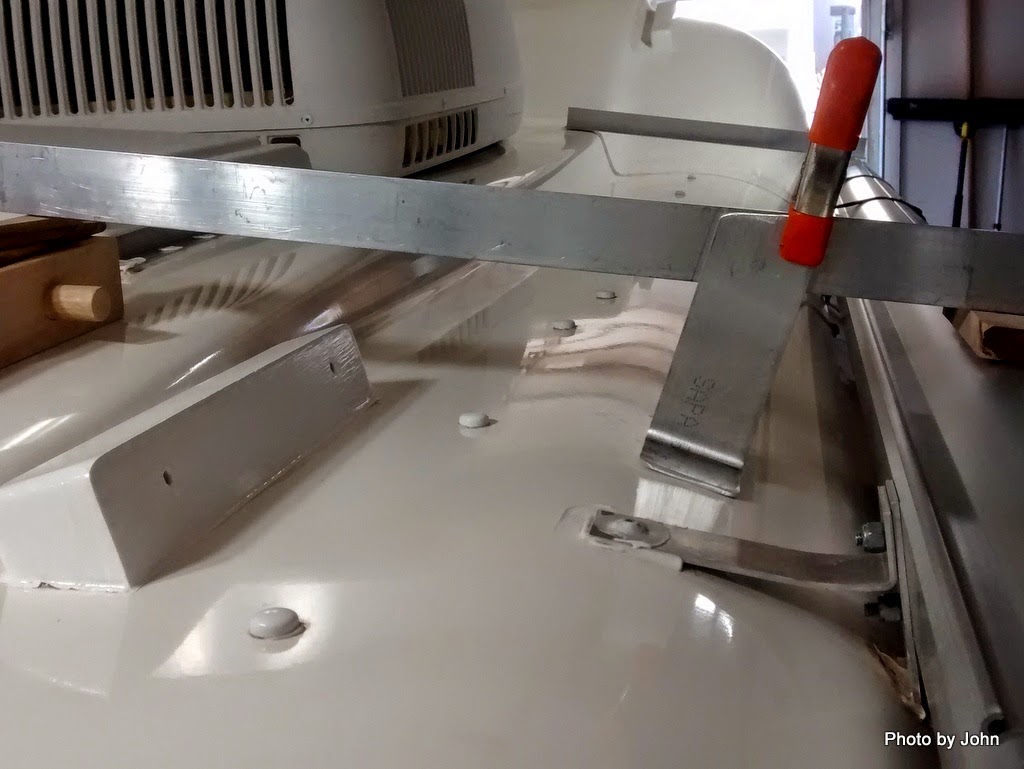 There's nothing about a Scamp body that is straight, square, or plumb. I decided to use the awning case as my baseline and work from there. I set one piece of angle at the forward most possible point and then started mocking up the rear mount to match those angles. 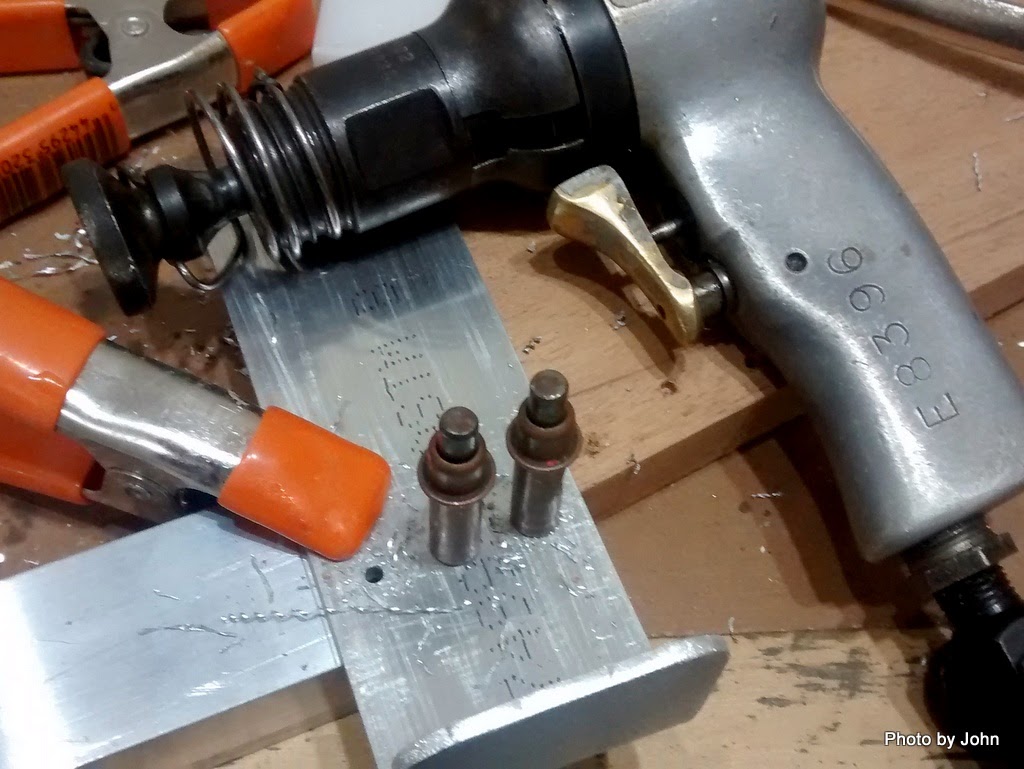 I haven't done any aircraft maintenance for over 20 years and haven't used my rivet gun for over 15 years but found that the skills don't totally disappear. The mount feet were riveted to the bracket with countersunk rivet heads on the inside of the mount. It's not show quality, but it will hold together. 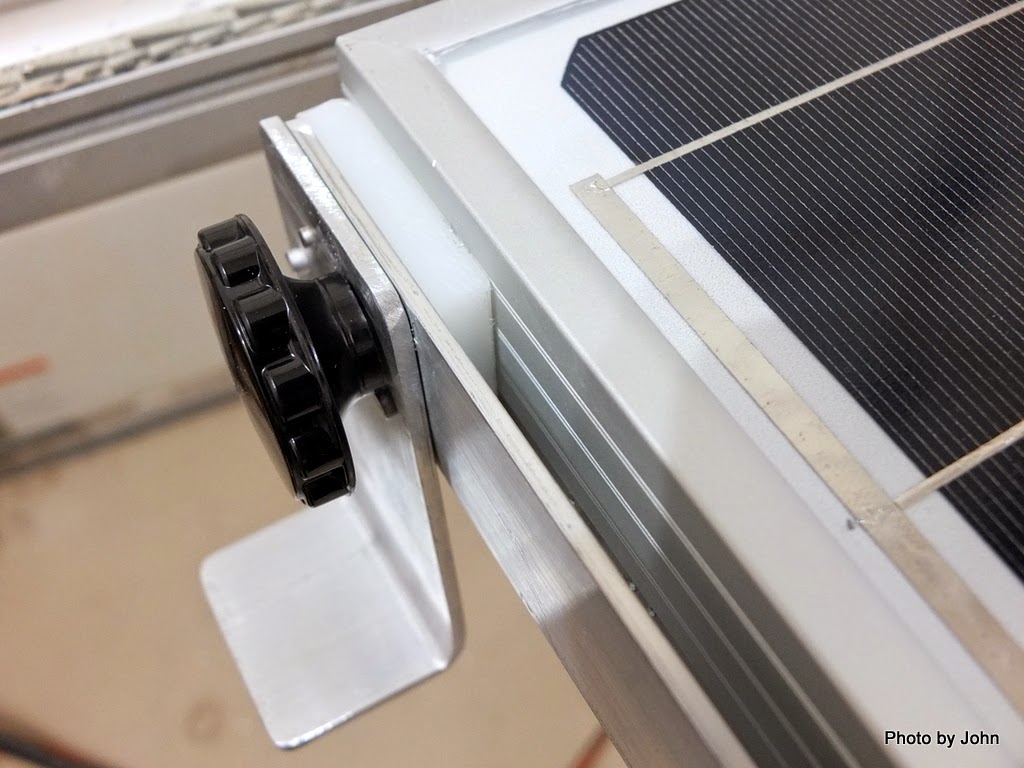 I used some 1/4" high density polyethylene (HDPE) left over from the cutting board / sink cover project as spacers and bearing material for the attach points. The spacer creates space for stowage of the tilt brace. 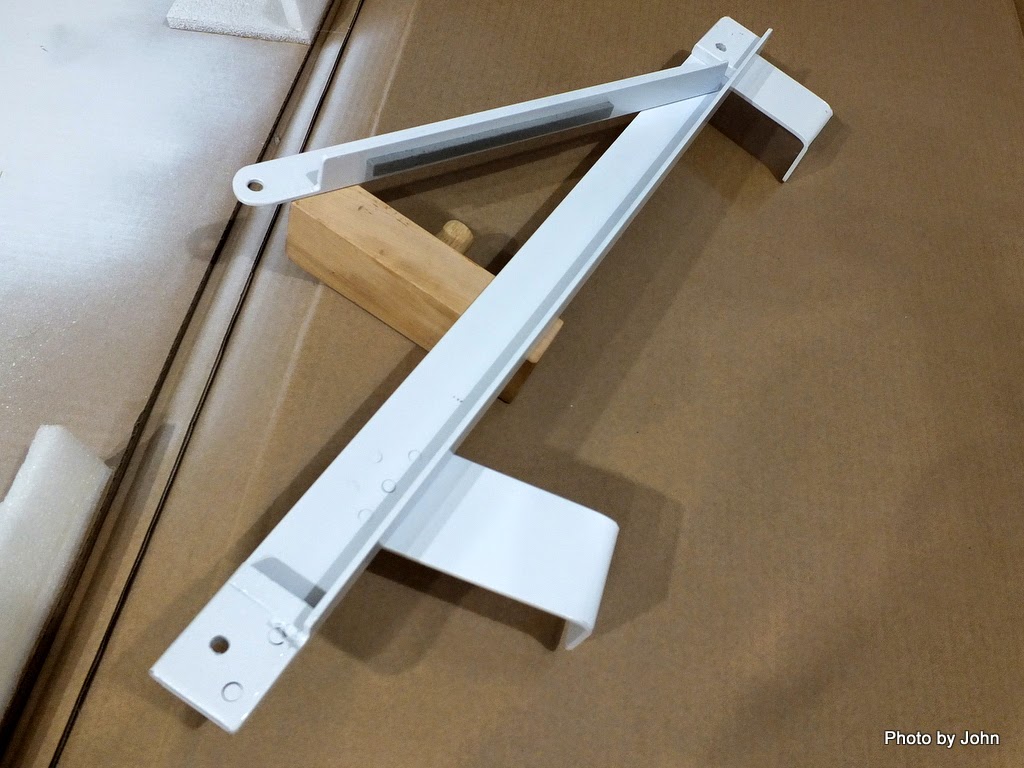 First bracket painted and assembled. The tilt brace has some foam on both sides to keep it from rattling when sandwiched in the closed position. 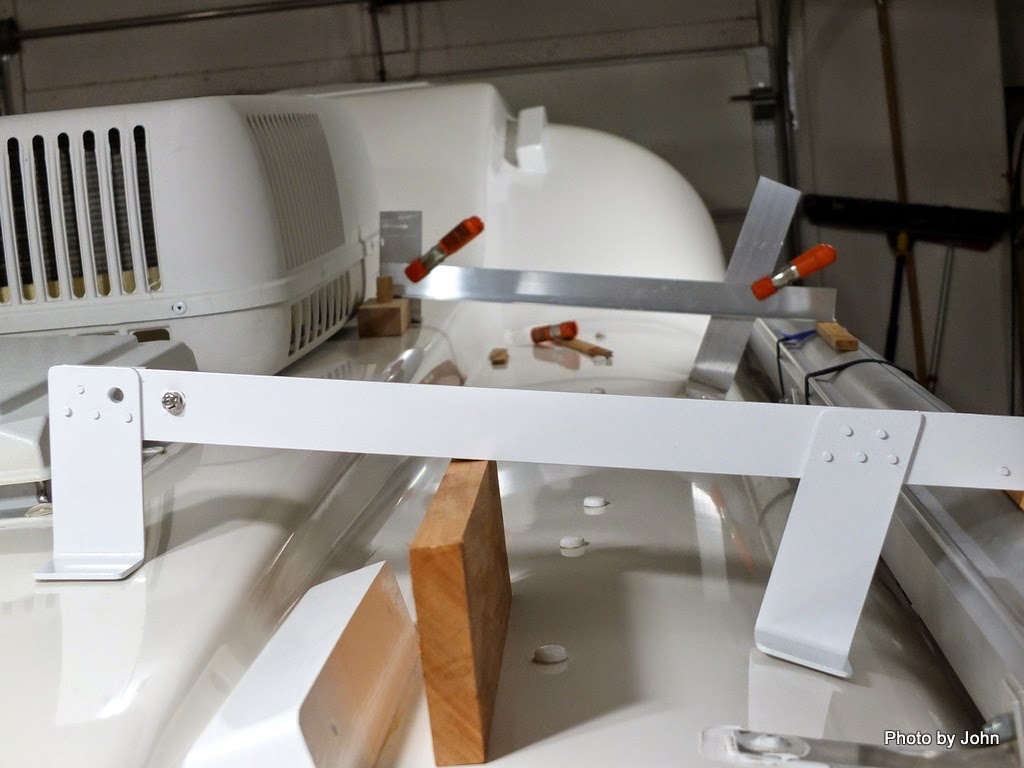 With the first bracket temporarily in position, I positioned the second angle and clamped the mount feet in position to match the same angle as the first mount. 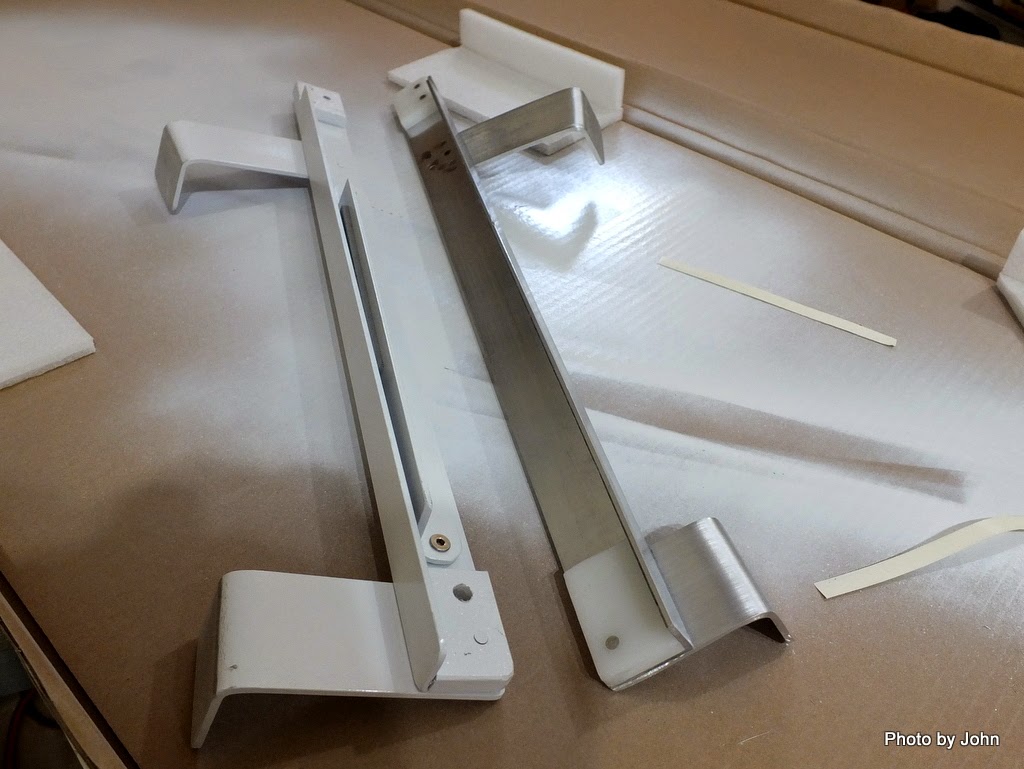 In theory, it should be a mirror image of the first bracket, but the tapered trolley tunnel clearly impacted the length of the inboard mounting foot. 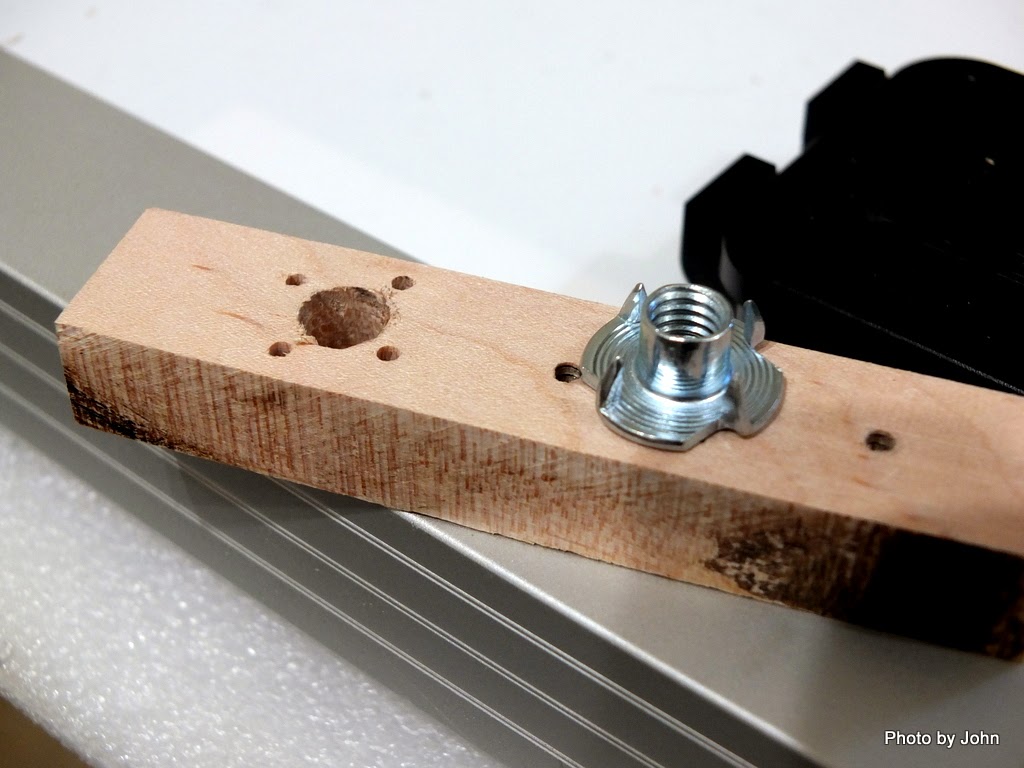 I wanted to use a nutplate to receive the hand knobs, but the knob stud had 5/16-18 threads and nutplates aren't available with coarse threads so I made my own from some pieces of maple and appropriately sized tee nuts 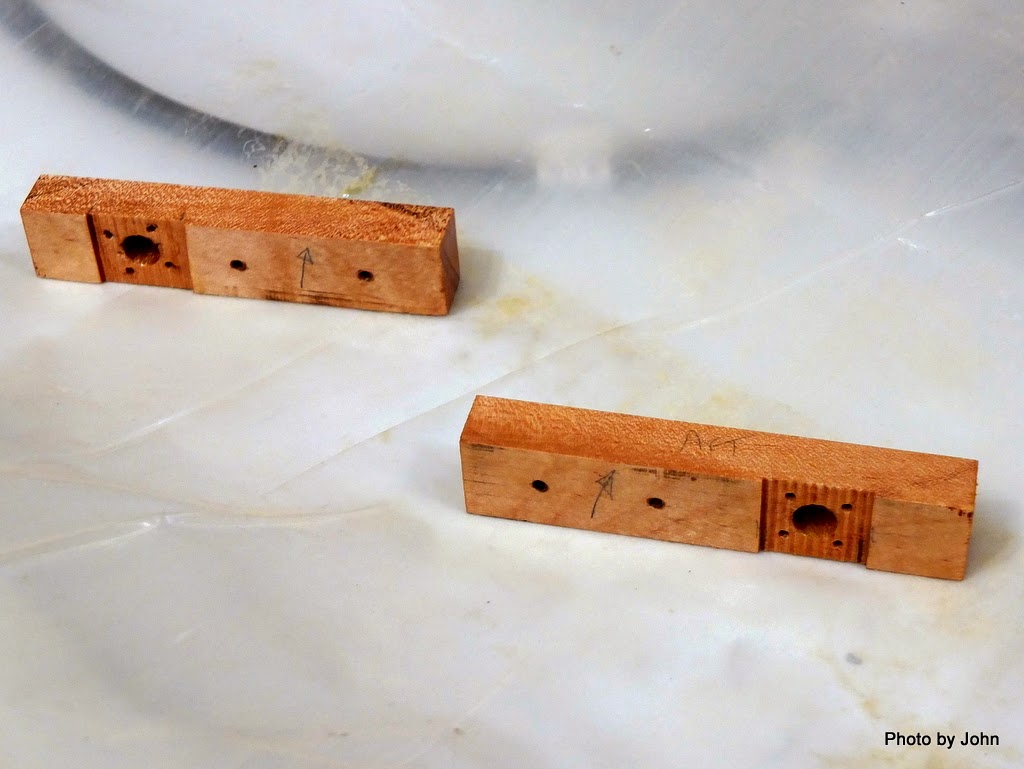 I added a shallow dado to allow for the tee nut to set flush and then put a coat of varnish on the wood to provide for some degree of water proofing. 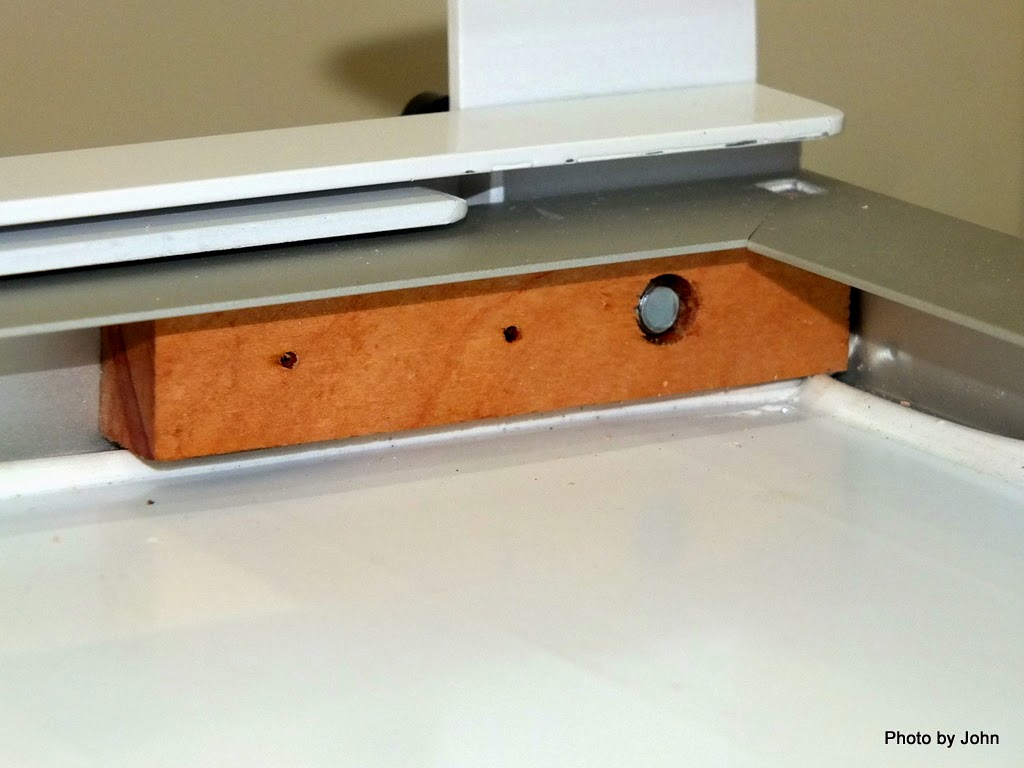 The block and tee nut combination functions like the nutplate that I wanted. It's hidden inside the panel frame and protected from most weather. 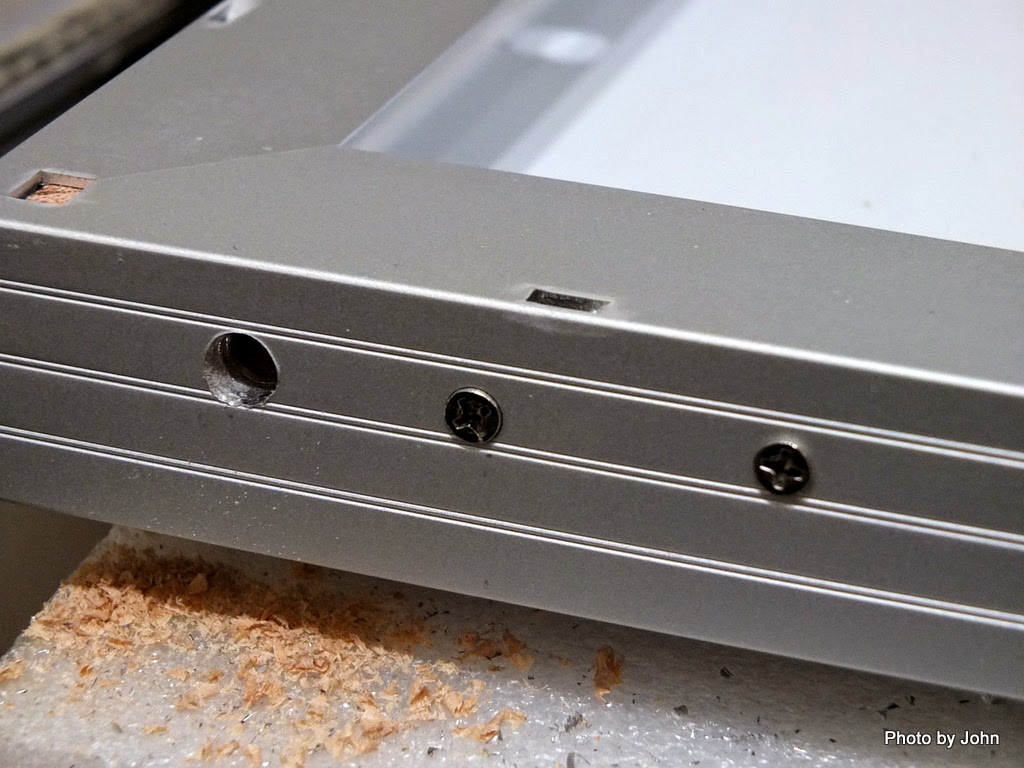 It's held in place by a pair of stainless steel flush head screws. 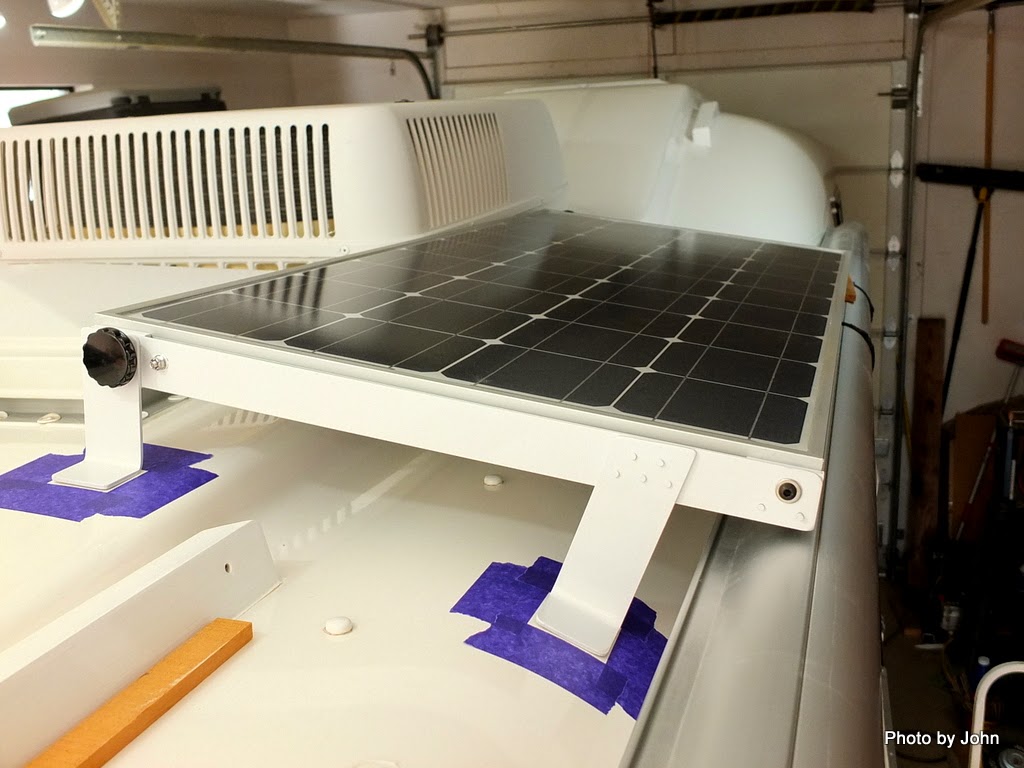 With the brackets attached to the panel, I was able to set the assembly in position and mark where each foot would be. The marks were essential because the wax needed to be removed from the fiberglass at those points. 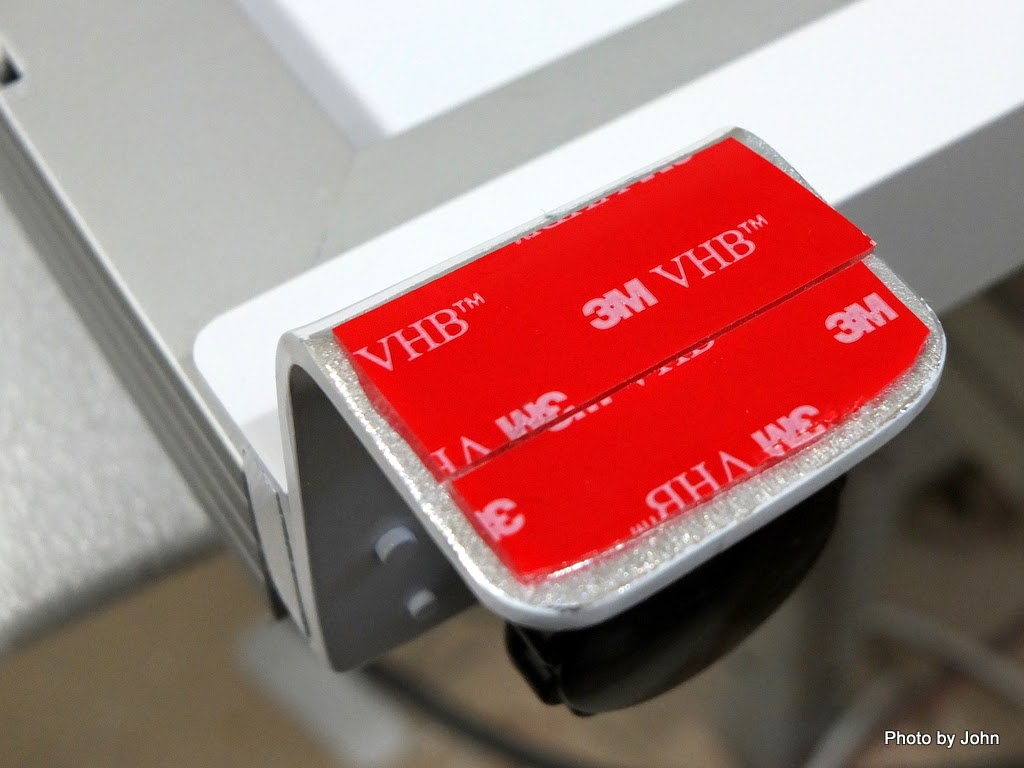 The mount feet were cleaned and then 3M Very High Bond (VHB) double faced tape was applied to the feet. 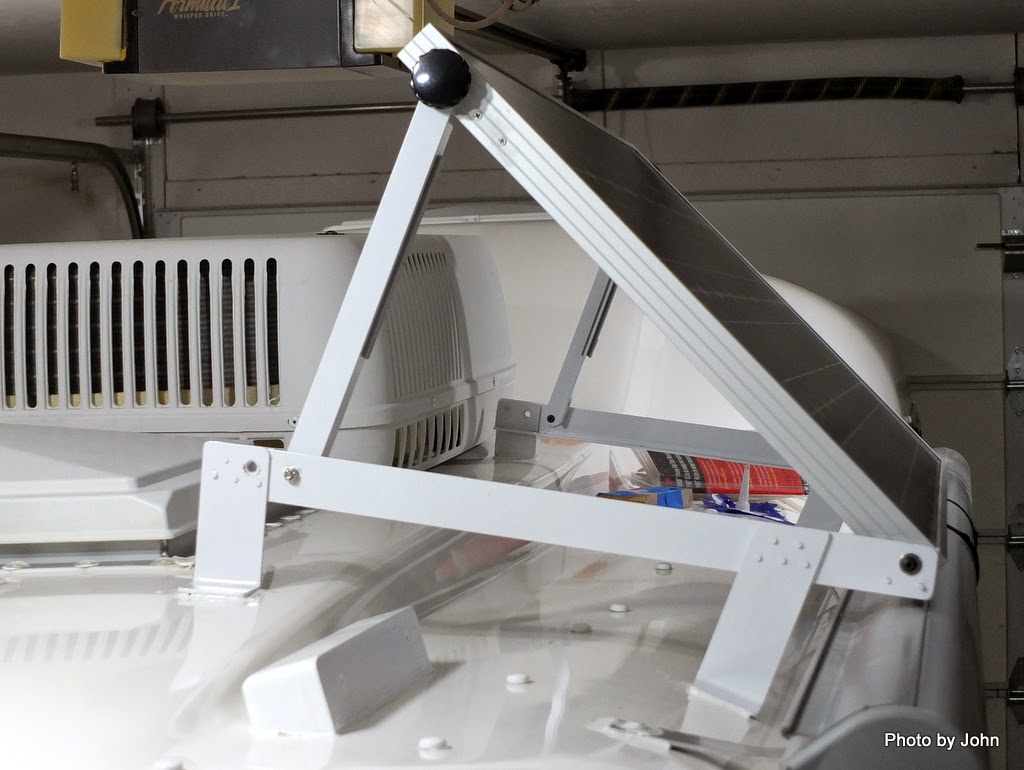 After the assembly was carefully set in place (the VHB will stick as soon as it touches), I sealed around the feet with 3M 5200. Standard 5200 takes 7 days to cure, but is the suspenders part of my belt and suspenders attachment system. Either the 5200 or the VHB should be adequate. If more assurance is needed, the feet could be riveted to the Scamp but I don't want to make more holes than necessary.