With the Alaska contingent arriving after Thanksgiving, we slid our celebration to Sunday afternoon. As usual, Thanksgiving for us included a Trash Can Turkey. An Internet group of which I am a member deals with a subject far afield from food or barbecue techniques, but when another member mentioned they were doing a Trash Can Turkey for Thanksgiving all of the experts without experience weighed in with why it couldn't or shouldn't be done. While I don't want to become an apologist for the technique, I thought it was time to document the process I use. There are lots of other tools and techniques that follow the same general process.

For the past 15 turkeys, I've used a Behrens brand 10 gallon galvanized can - we'll discuss material and technique choices at the end of this post. Amazon still shows them in the $25 ballpark. The can is about 16" tall, 16" diameter at the open end, and about 13 inches diameter at the closed end. It's the smallest container that will work with the 20-22 pound birds I prefer. 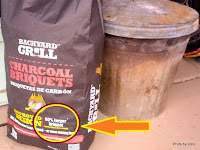 While you can use any charcoal, I much prefer a larger briquet for its longer burning time. Last year I found some Sam's Club brand with large briquets. This year I found this at the same store - worked well. One 18 pound bag is plenty. 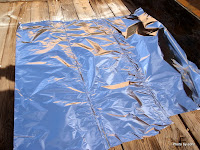 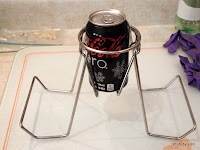 I got my rack from a vendor who no longer stocks them, but the exact same stand is available at a much more competitive price from Amazon. It's designed to hold a can the diameter of a common soda or beer can 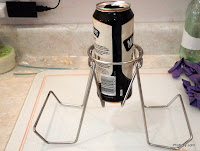 but I've discovered that taller cans (about 16 oz) work better because it doesn't let the turkey sag as much. I've tried a variety of different liquids but prefer a dark beer for the best turkey flavor. You'll need around 4 or 5 oz in the can. The rest can be disposed of in your preferred manner. 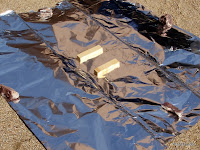 I also use a couple small pieces of 3/4" thick wood as spacers under the stand to keep the turkey off the ground. Different height cans may use thicker spacers or taller stands - you'll want the top of the turkey reasonably close to the top of the can. 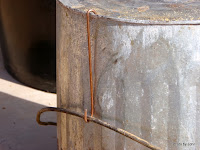 The other important piece of equipment is a bent piece of welding rod or clothes hanger to hold the bail of the trash can up so that it doesn't knock over the turkey when removing the can. Don't know how I learned that ... 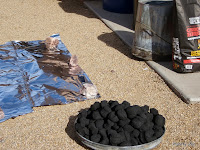 I use the trash can lid as a place to start the briquets since I don't have multiple chimneys or a place to store them. One heaping lid full seems to be the right amount to get the process started - about 60% or so of the bag. The lid can also be lined with aluminum foil to serve as a turkey platter later if there is a river in sight. 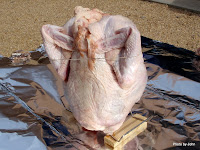 I usually tie the wings flat to the body of the bird and tie the legs together with kitchen string. This time I tried folding them and leaving the legs loose. I don't use any seasonings or brine on the bird whatsoever. 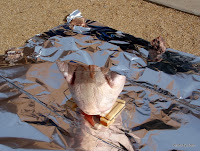 Because my can is minimal height, I add a piece of aluminum foil on top of the bird to reduce the potential for burning, 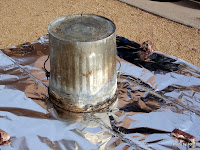 and then center the upside down can over the bird. 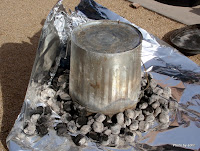 The lid full of briquets go around the can on the outside of the can. A shovel, long tongs, or some other tool of your choice works for moving the coals. I normally use a military style folding shovel on river trips. 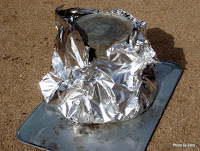 The edges of the large aluminum foil sheet are carefully folded up and bunched around the can leaving an inch or two clearance. Ideally, the foil will reach to the top surface of the can. Use care to not tear the foil. Bringing the foil up around the can is different from most Internet procedures but reduces the charcoal requirement and the cook time. 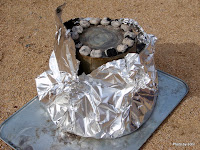 About 45 minutes into the cooking, I add a ring of briquets around the outer edge of the top surface of the can.  Many techniques call for loading the top of the can with coals at the beginning, but the height of this can will result in upper end of the bird to be burnt to a crisp if I do that. 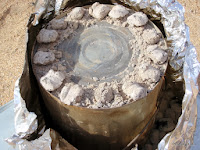 An hour 45 minutes into the process, there is still a significant core to these large briquets. I added some briquets around the base of the can and on top anyway because 4 lbs of left over large briquets doesn't do me much good. 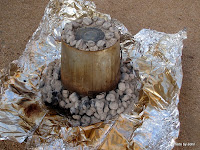 At 2 hours 40 minutes the foil is pulled back and spread out. The dark area at the front of the can is where the juices have run out under the edge of the can. When the juice hits the coals, it creates smoke, much of which remains in the can to give more flavor to the bird. 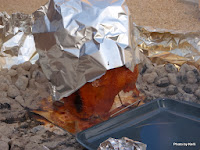 After carefully scraping the coals off the top of the can and away from the base of the can (try not to tear the foil) in a U shaped manner, the hot can is carefully lifted off the bird using welding gloves and set aside. A rimmed pan can be positioned in the open part of the U where the coals have been cleared away, 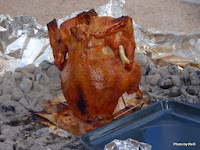 and the foil removed from the upper end of the bird. This example held together. Often times the bird will be literally falling apart. I think not tying the legs together reduced the tension enough to help the bird stay together. 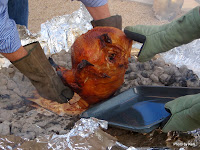 With a helper, tip the bird on the base into the pan. There will still be liquid in the can so use care. 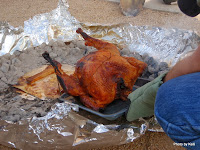 Because the legs weren't tied, it was easier to remove the base and the can from the body of the bird, but it also allowed the legs to get closer to the can, burning the ends. 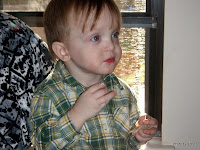 I didn't get any pictures of the carving, but youngest participant clearly enjoyed it.

Two hours 40 minutes but it could have been 15 minutes less.


For the diehards that want more detail:

There is a lot of controversy, especially among people who have never observed the process, about the health hazards presented by the use of a galvanized can. It seems that they've heard about welding fume fever caused by breathing the fumes of welding galvanized materials. This process doesn't get nearly hot enough to cause gassing like that created in the welding process. While some sources suggest 700 degree temps in the can, I'll note that the string holding the wings survives and liquid remains in the can even though it starts out less than half full. Some individuals seem to think that any contact between galvanizing and potable products is a significant risk, simply forgetting or ignorant of the number of people whose homes were and in some cases still are plumbed with galvanized pipe. In this application, there shouldn't be any contact between the can and the turkey.

A very experienced dutch oven cooking individual who learned the technique from a gal that I taught has adapted the process to use a 60 quart aluminum stock pot which seems an elegant approach. I especially like the stand he fabricated although it would be too tall for my can. You can read his report online.

HowToLou posted a video of their technique on YouTube. They use a larger can, much more charcoal, a piece of steel rod for the stand, and no aluminum foil reflecting the heat outside the can. Others use a pan inside the can under the stand to avoid having the dripping run out under the can. While I've observed that technique, I think the smoke created by the juices hitting the charcoal is an important component.

I'm not suggesting you should use this technique or any other, but I can say that I've fed large groups using this method without any complaints other than "is there any more?"
Posted by Just Finding Our Way at 8:48 PM

Email ThisBlogThis!Share to TwitterShare to FacebookShare to Pinterest
Labels: Trash Can Turkey, Turkey