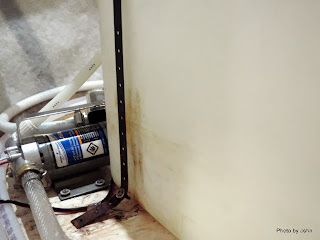 I've had a remnant of last summer's Alaska trip that I finally got around to fixing. Somewhere along the way, the strap that retains the outer rear corner of the fresh water tank pulled out of the floor. 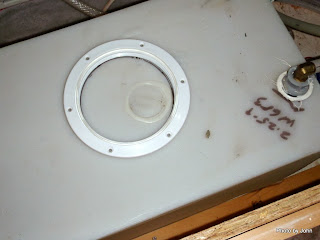 Since I was going to pull out the curbside seat to replace the retaining straps I figured now was the time to install a cleanout port in the water tank as well. I ordered a JR Products 5" deck plate from Amazon for the project. 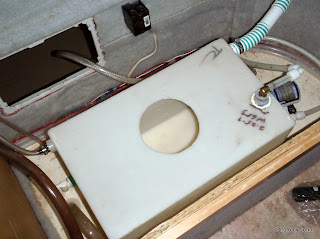 The tank was previously drained of as much water as possible. As usual, I used my small trim router to cut the hole for the retainer. The tank was soft enough that I likely could have used a knife instead which wouldn't have made as much mess in the tank. 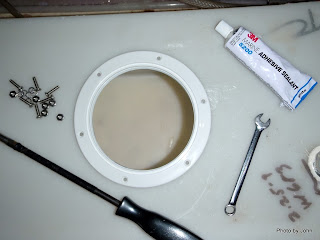 Stainless steel panhead screws with lock washers and plain nuts were used to attach the ring to the tank. 3M5200 sealant was used under the rim of the ring with a dab on each screw as well. 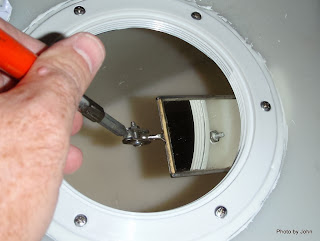 I double-checked each screw to insure there was some sealant on the threads which will keep the nuts from backing off due to vibration. 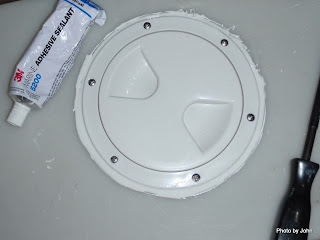 The lid has an o-ring on it and screws into the ring to make a waterproof cover. Now it is possible to clean the inside of the potable water tank should it be needed.
Posted by Just Finding Our Way at 5:46 PM