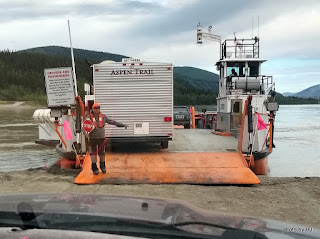 All too many people say don't be stupid when talking about driving the Top of the World route between Dawson City, Yukon & Chicken, Alaska. My response is don't be chicken! Since the border is closed during the winter, the first step to this route (westbound) is the free seasonal George Black ferry to cross the Yukon River. We missed out six years ago because the river thawed later than normal I checked the weather report a couple days prior and it was calling for low 70's and sun. We did start out the day with some bright spots but very little true blue sky. At least it was clear enough to understand where the "Top of the World" name comes from. 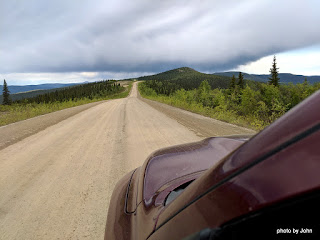 The vast majority (all but a couple miles) from Dawson to the border (67 miles) was wide, excellent gravel. I didn't drive the posted speed limit (50 mph equivalent) but was very comfortable driving at 40 to 45 mph on this section. The views were beautiful and the road was excellent. We had occasional sprinkles, just enough to hold the dust down. 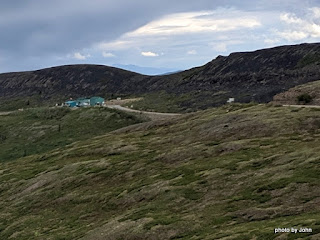 The Canadian and US border post was visible when we came around a corner. 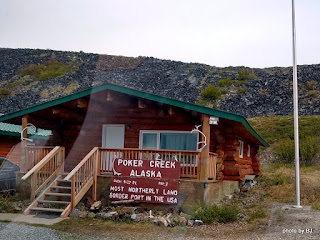 Customs questions were of the typical firearms, alcohol, fresh fruit variety. Less than five minutes and we were on our way. The more interesting part of the border crossing was the cabin across the road from the sentry station. Not clear if it was a part of the customs complex or not. 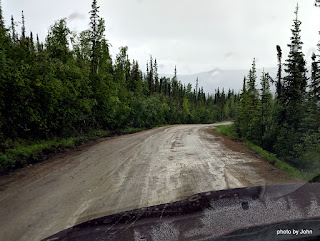 The gravel road from the border to Jack Wade intersection (three way Chicken/Eagle/Border) was narrower than on the Canadian side. It was nice to not have much traffic for this 17 mile section so that we could pick and  choose our line to avoid the vast majority of the potholes. 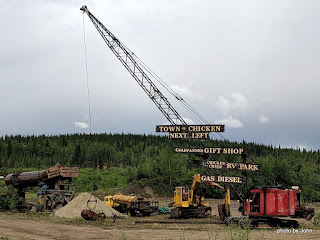 It rained, sometimes heavily, most of the way from the border to Chicken. The last 22 miles from Jack Wade to Chicken was the narrowest and had the biggest potholes. Much of this section was driven at 25 mph because of the rain, potholes, and oncoming traffic. 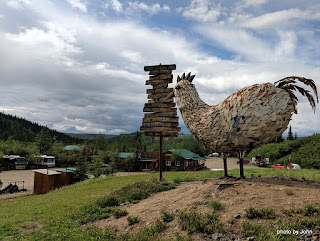 We stopped for a few pictures in Chicken. Obviously, a picture of  "the" chicken was necessary, 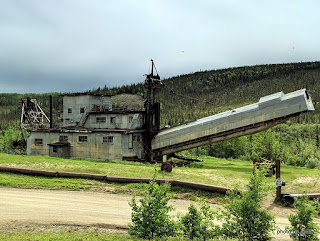 but the real reason I stopped here was because I wanted to see the Pedro dredge, still parked where they quit using it. 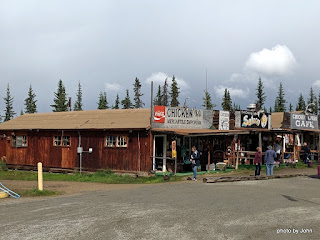 We'd heard about Susan's chicken pot pie and couldn't resist since it was now approaching 1:30 in the afternoon. 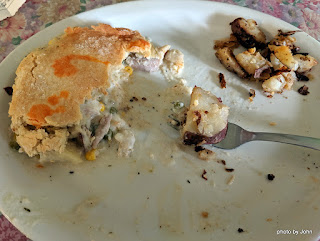 The tour bus that had passed us was finishing up so we didn't have any problem getting a seat. I did, obviously, forget about getting a picture until it was about 75% gone. Huge serving, excellent food, but NOT cheap! 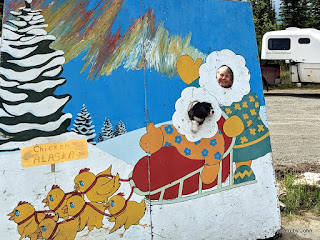 Turk and BJ had to check out the Chicken sled photo opportunity. 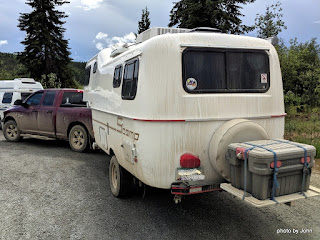 My advice - don't try the road unless you're planning to wash your rig, but even in the rain I thought this was a "don't miss it" experience!

In my opinion, the 67 miles of asphalt from Chicken to Tetlin Junction was MUCH worse to drive. Yes it was asphalt, yes it had fewer potholes, but the frost heaves were MUCH worse (although not as bad as the yet to be experienced Tok - Glennallen section!) In my opinion, the gravel is NOT a reason to skip Chicken!
Posted by Just Finding Our Way at 2:30 PM