In July, I helped a friend create some geocaches that she took home to Belgium.  A couple months ago, I helped with a couple more caches that she planned to take home at Christmas time. One of those involved a plastic ammo can with a doorbell, and another was a maze cache, both based on concepts by a local geocacher. 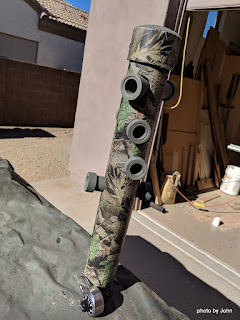 A few days ago, I was doing some cleaning in the shop and decided to make another cache for her if there was room in her suitcase. It's made from a piece of 2" PVC pipe about 18" long. She said she had room so I put some left over pieces to work to create a puzzle cache. Again, this was modeled from a concept by another local geocacher.

When she picked it up, we chatted about possible TSA questions. I didn't glue the collars on one end of the cross pieces so that it wouldn't take up as much space and so that would be easier to inspect. 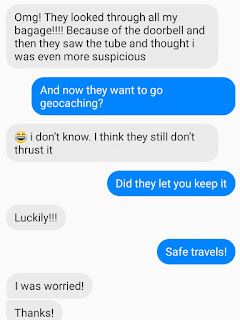 This morning, I got this message. I'd totally forgotten about the ammo can with a door bell hidden under a false bottom, but the camo on the plastic pipe probably didn't help any.

Now that she's through security, she should be good to go.

Here's hoping that geocachers in Belgium appreciate their Christmas gifts from the U.S. 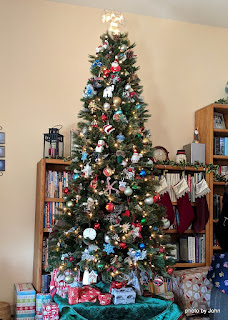 And from our house to yours, please remember the reason for the season!
Posted by Just Finding Our Way at 2:30 PM