A Bit of Barry Goldwater 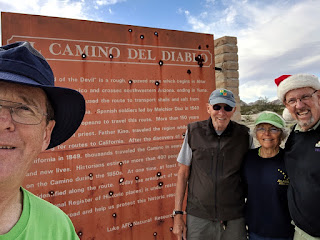 It was an 'o dark:30 departure as four of us headed to a part of the western section of the Barry M. Goldwater Bombing Range. The Goldwater Range covers a very large part of southwestern Arizona. A permit is required to access the range.

By the time we got there, the sun was up. The Devil's Road has a reputation that dates back centuries and we weren't sure what to expect. 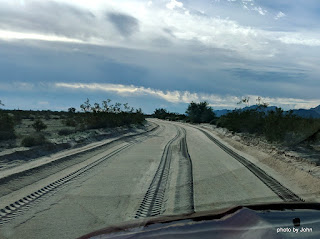 I was expecting miles of wash-boarded road, but discovered a large portion where we were the first tracks other than the pair of road graders which we eventually caught up with and passed. Most of the road was relatively smooth, but soft sand. 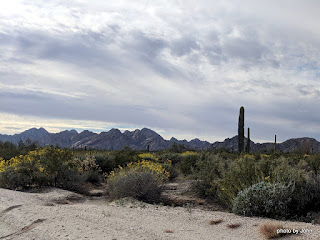 The desert was amazingly beautiful with the brittlebush blooming after recent rains. 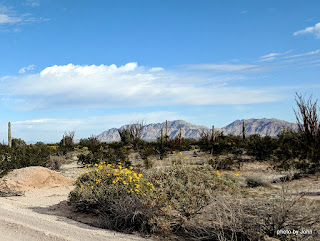 Through the day the cloud cover varied, changing the shadows on the mountains. 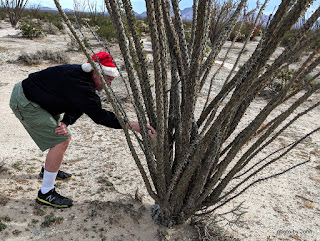 We stopped for one cache at the beginning of the section we intended to do, and then drove to the south end and worked our way back towards town. 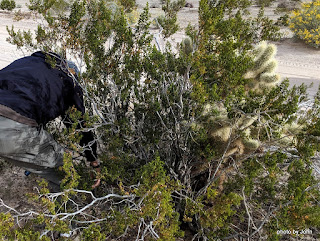 Many of the caches we were searching for were in bushes or occasionally trees. In spite of all the potential, we didn't leave much DNA on the thorns, but did manage to sign 82 Wherigo cache logs and 23 traditional cache logs. 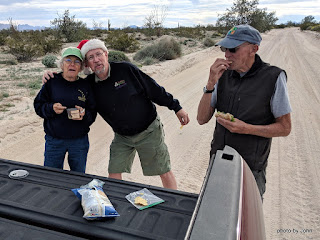 We stopped a couple times for snacks and to rest our runners, and managed to catch a little mugging for the camera. We saw a couple Border Patrol vehicles and a Fish & Wildlife guy, but no one stopped to quiz us about what we were doing. 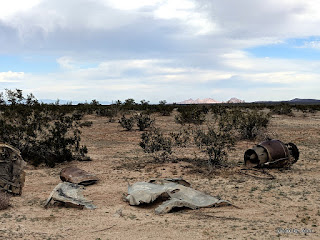 A couple points along the way we spotted fake tanks that seemed to be targets, and in one spot, the remains of a flying machine of some sort. We even enjoyed a couple low passes by some fast movers from the Marine base. 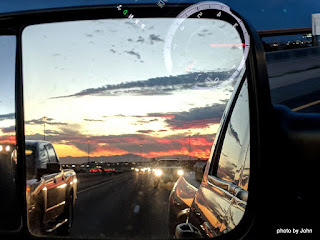 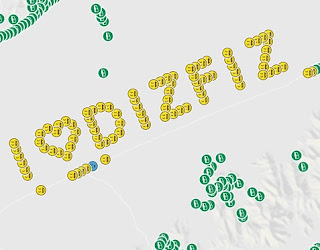 and mission accomplished. There are literally thousands of geocaches on the range, most along the roads, some that require hiking to access, but we got the ones we went for and a few others along the way. I've never met DizFiz, but somebody loves'em.