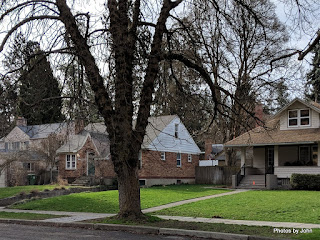 In 2016 we elbowed our way into helping with next generation projects. Our moochdocking spot on South Hill has provided a short term base and some interesting projects more than once. 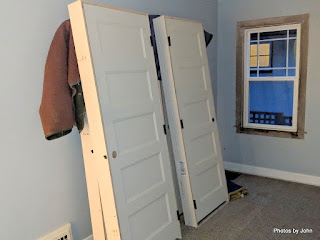 Before we left on our cruise, my niece contacted me and asked if I would consider a bigger project at their house. They wanted to install eight new doors, new trim on three sets of windows, and some new baseboard in their 90 year old house. Looking at the calendar, it looked like it was most logical to fly up and do the project rather than wait until we might get there in June on our 'normal' travels. 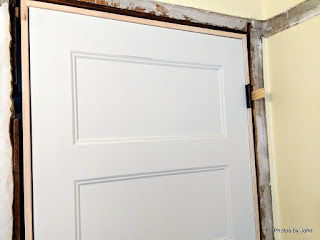 I agreed to help with the project with one caveat. They needed to spring for prehung doors to reduce the amount of work. Knowing that no house of that age would be square & plumb, I told them I could give them up to two weeks. (Turns out the only professionals that would even consider the project suggested a minimum of two weeks.) 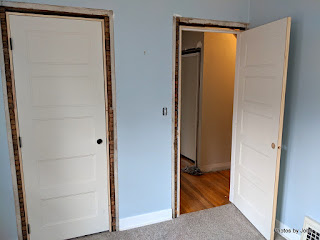 I 'cheated' and got a bit of a head start Sunday evening by installing one of the doors. On Monday, Ellen's Number One Son (also known as my niece's husband) joined me. Together, we got the remaining seven doors hung by quitting time. 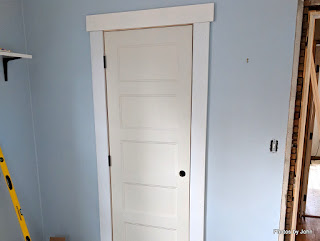 Tuesday and Wednesday were spent fitting and installing door trim. The closet doors were easiest since they could take the full trim that had been chosen. The rest of the doors required significant modification of the trim for it to fit. 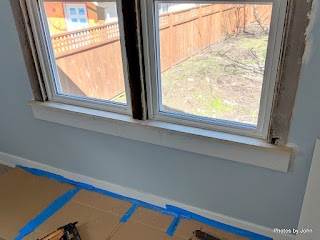 I concentrated on window frames on Thursday and managed to have the new sills and trim in place by the end of the day. 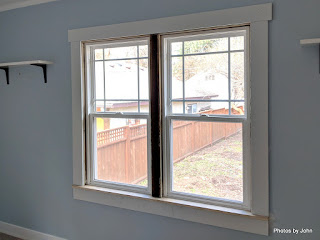 I never did get a picture of any of the windows totally trimmed out, but this one was getting close. Unlike Ellen's house, where we were installing window weights that had been previously removed and the sliding sash decommissioned, this house had been refitted with modern windows that didn't require weights. 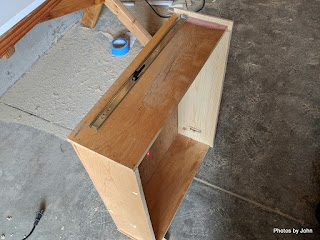 On Friday, I tackled the last of my projects. The hall linen closet had three drawers that were unusable. They were built of wood that couldn't be purchased today, but they didn't have any drawer slides. I disassembled the drawers, narrowed them to make room for full extension drawer slides, 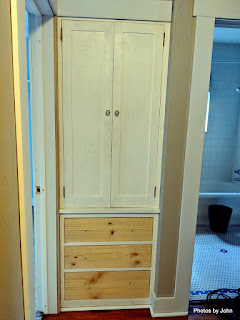 and replaced the drawer faces. The old drawers had single pulls, while the new faces are set up for two pulls, so temporarily they sport wood screws for pulls.

Done with my part in a week. Time to go play!