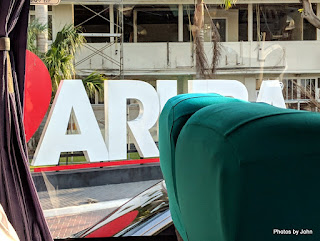 Both Aruba and Curacao are constituent countries of the Kingdom of the Netherlands and they're very close to one another, but I found them to have a very different feel. Aruba was much smaller and more inundated with tourists. We joined the flow, taking a guided tour around the island. This was the best photo I got of the Aruba sign! 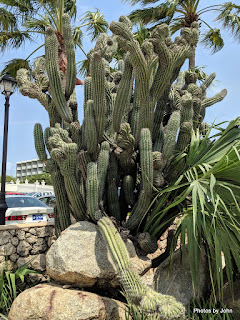 Aruba (and Curacao) are much drier than the islands located further east. They get more rain than Phoenix, but not significantly more.

Aruba is located just 14 miles off the coast of Venezuela. There is a lot of trade with Venezuela, especially with the fishermen.

Much of the western side of the island was shoulder to shoulder resorts on the beautiful beaches, backed by lots of international name brand shops. 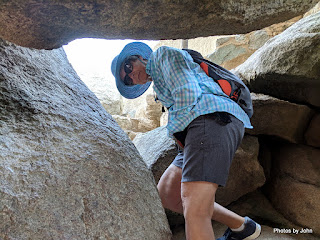 Our tour started by heading out of town the other direction, towards Casibari Rocks. These LARGE rocks almost seem like glacial erratics, seemingly appearing out of nowhere. There seems to be a couple theories to explain their existence. 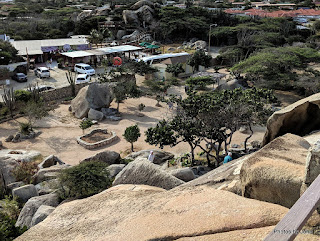 The rocks, as viewed from the top of the largest rock, seem to be constrained to a relatively small area. 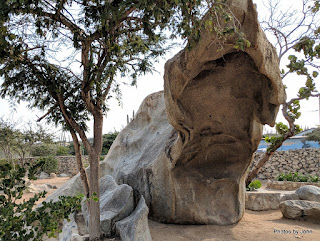 Some of them are more obviously wind shaped, taking on some unique forms. 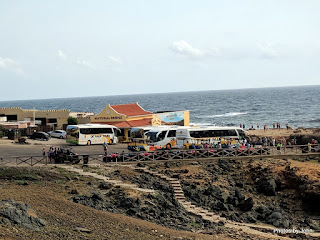 From there, our bus (and many others) went to Natural Bridges.The 'real' natural bridge fell down over 10 years ago but there's still a 'baby bridge' to see. 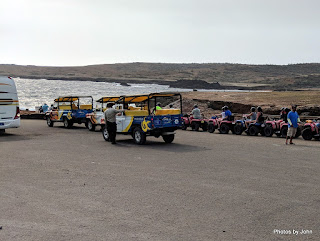 The site draws bus tours, Land Rover tours, and ATV tours to watch the waves and see the bridge. 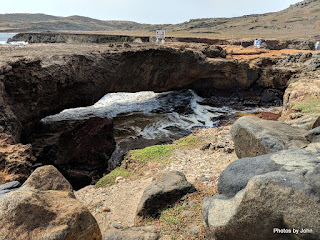 Apparently the 'real' bridge reached over 20 feet above the water and spanned 100 feet. The baby bridge is smaller and lower. As a spoiled southwest desert rat, I was impressed with their marketing skills. 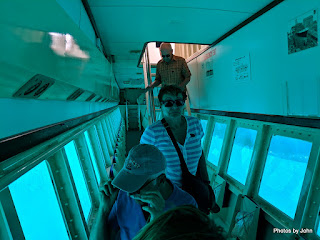 Our tour continued with a semi-submersible, aka Disney style submarine. They had a fair amount of wind and as a result the water was murky. 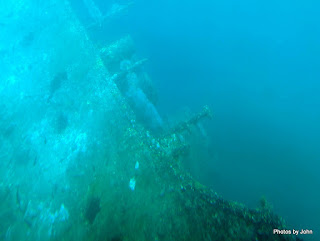 The highlight of the boat part of the tour (at least for me) was the story of the Antilla. This 400 ft. German registered ship was intentionally scuttled at the beginning of WWII. The Antilla crew spend the majority of WWII interned in Jamaica. The ship lays in about 60 feet of water and is a popular dive site. 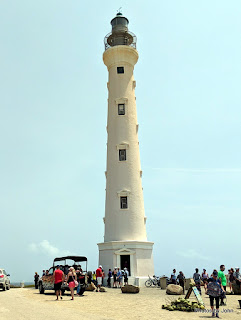 The last stop on our four hour tour of Aruba was California. More specifically, the California lighthouse. This lighthouse was named for the steamship California, which wrecked on the nearby shoals in 1891. The lighthouse is no longer functional except as a tourist attraction.

Perhaps if we'd gone exploring on our own I would feel different, but Aruba was the biggest disappointment to me. It's arguably the most well known Caribbean island, but left me without any interest in returning. Curacao, on the other hand, is pulling me back.
Posted by Just Finding Our Way at 2:30 PM