You Meet the Nicest People 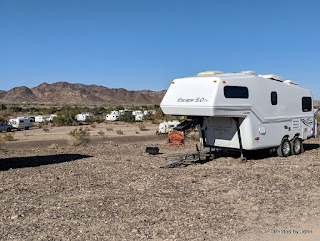 One of the things I enjoy most about our time in Quartzsite is the wonderful people you meet. Once again, it proved true during our time at the Fiberglas Gathering. 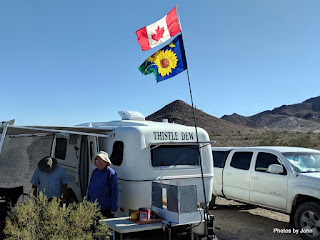 Shirley and Alan visit the southwest for several months during the winter from their home in Canada. During their time in Arizona, Shirley spends much of her time wandering the desert, picking up trash and always on the lookout for human remains. She bags her trash picking and then calls the BLM or Border Patrol who pick them up on their rounds. 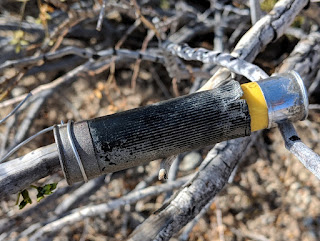 As she was describing what she does, the conversation wandered to the sorts of stuff she finds. She's noticed pill bottles and shotgun shells placed at regular intervals along some of the roads. Without checking the contents, these items get dropped in her trash bag with everything else. As we chatted about geocaching, she got a funny look on her face as she realized along with the trash she collected, she was also picking up whole series of geocaches! 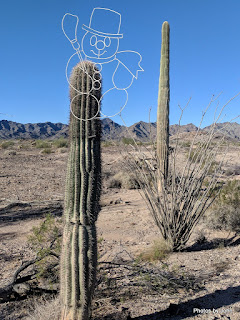 Geocaching in Quartzsite is very different from most areas. It's so arid that shotgun shells make a perfectly adequate container, but a container that just looks like waste to someone else. When I showed her this picture, she immediately assumed that the decoration on the saguaro was trash, rather than a host for a geocache. Since she never opened the containers, she never saw the logs - she just saw trash that needed to be picked up. 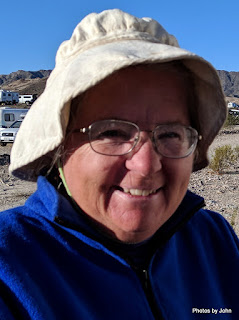 This super nice, smiling lady spends hundreds of hours every winter picking up bags of trash. Most of it is left in the desert by individuals traveling on foot from points south, but some of it has significance to geocachers. She was a bit embarrassed and is now more aware that one person's trash is another person's treasure.
Posted by Just Finding Our Way at 2:30 PM