So How'd the Gambling Go?

On the solar project, we ended up making a trip down the hill to the hardware store for a few small things, but we were successful with having all the special stuff we needed, including a couple extra 12 volt outlets.

The AT&T mifi was the right choice! We had super strong signals from AT&T in places where I had weak Verizon signals two years ago. Given a choice, AT&T is still the best option for travelers to Alaska. 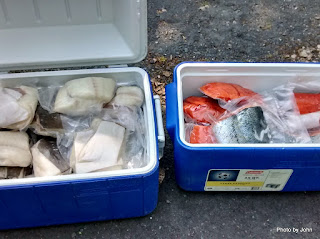 Fishing is clearly a gamble, especially for someone who had never fished. With three generations fishing, I expected we would catch something, but all three of us limited on both halibut and king salmon the day I joined them. We ended up with two ice chests (over 75 pounds) full of cleaned and vacuum-packed fish. 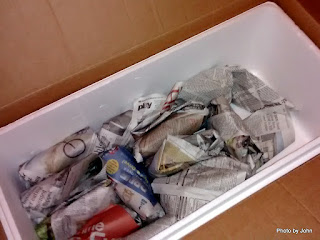 Checked baggage arrived on our initial listed flights. My bag got to Anchorage before me, but BJ was on that flight so she was able to pull it from the carousel. I was a bit more concerned with my southbound schedule because in addition to my bag I also had a box full of frozen fish. Both my bag and the fish arrived as planned, and in spite of the 105 degree weather in Phoenix when I landed, the fish was still rock hard.

Two weeks of fun with family for me, and all the "gambles" paid off. How soon can we do it again?
Posted by Just Finding Our Way at 2:30 PM