Wandering, With A Destination In Mind 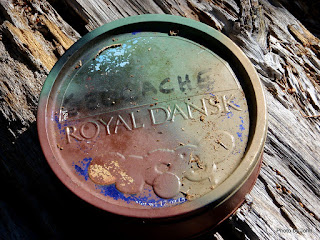 The grandson is scheduled to arrive soon, so BJ and I took advantage of our Arizona high country wandering to practicing locating geocaches. It was a good excuse to wander some forest roads, to learn some bits of history, and to see places we likely wouldn't have seen otherwise. 'Sides that, we located a bunch of geocaches, including some that hadn't been visited for a year. (We visted a couple had hadn't been found for a couple years - we didn't find them either!)

One of the roads we followed was part of the General Crook Trail, complete with markings on the trees to keep you on course. Lots of the roads showed signs of being very muddy when wet, but were easily passable with the 2wd truck since the roads were dry. As always, click on the pictures for a larger version. 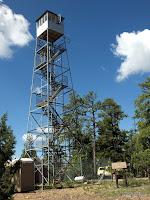 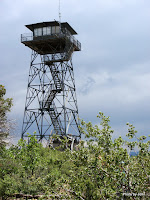 Our travels took us to two fire lookouts. Deer Springs has a small cab with a cabin on the ground provided for the lookout. It was near the Big Fire multiCache. Juniper Ridge has a much larger cab, with the lookout living in the cab while on duty. The Juniper Lookout Toy Cache was nearby. 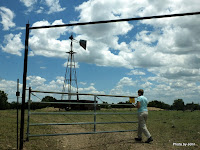 We visited several windmills including this wood frame with all the windmill mechanism long gone. The top portion of the stone lined well casing was still visible. It was located near the Windmill Cache. The cache hadn't been visited for nearly a year. The nicely named WELL! How About That? cache was worth the drive for the view, but wouldn't have been an option for us in the wet season. 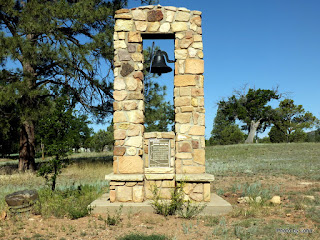 The small town of Pinedale honored their history by constructing this monument to display their original school bell. The bell was purchased in 1892 and served at three different school buildings before ending up here near the Back To School cache.

All told, we located at least 16 caches while camped for 6 days at the lovely Grover Spring Canyon boondock site. There are lots more that could be found, but it's time to empty the black tank and look for a location with even more elevation.
Posted by Just Finding Our Way at 2:30 PM