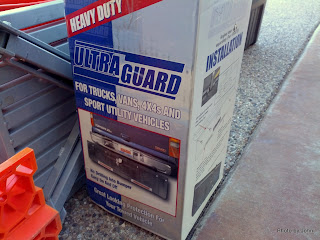 The three week test trip showed that nearly all of the mods worked as expected or even better. Since we were fortunate enough to experience a couple days of rain in the desert, we also experienced muddy roads and decided that more effective mud (and gravel) flaps on the truck would be a worthwhile investment. After looking at several types, I decided to go with the "UltraGuard." 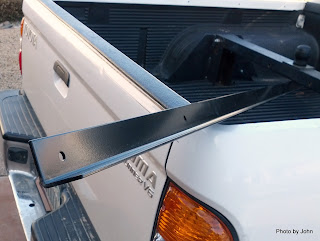 The UltraGuard is designed to bolt to the 2" shaft on a removable ball mount. The angle is an optional item and comes in a couple different sizes. All the other parts are included in the package with the mud flap. 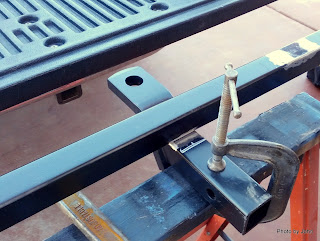 Unfortunately, because my hitch is mounted very close to the bumper, the standard angle and clamp weren't an option. Instead, I welded a length of salvaged 1.75" sq. steel tube to a spare ball mount. 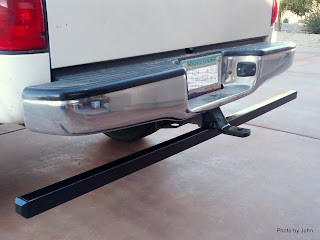 I found some plugs at a fencing and awning business for the ends of the tube. 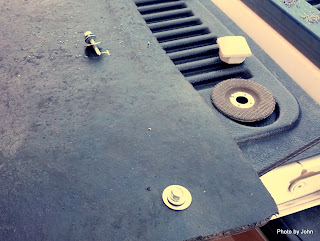 Instead of using the supplied nuts and bolts that would have worked with the angle, I used some 1/4" self-tapping screws with stainless 1" fender washers to attach the flap to the steel tube. 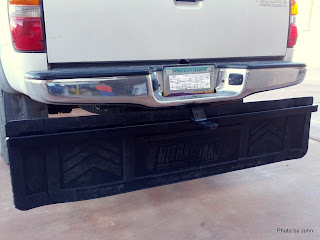 Looks like this will do the trick but I don't expect we'll have a chance to test it until we leave on the Alaska trip in two months.

I still need to design and build a mud flap or protective device for the grey water drain, but that will be a different project.
Posted by Just Finding Our Way at 10:34 AM