A Visit to Mecca

The most recent version of the Salton Sea resulted from a Colorado River flood in 1905 that breached canals supplying water to growing agricultural operations in the Imperial Valley. At 227 feet below sea level, it is a evaporation basin without an outlet, fed by agricultural runoff. It is an important stop for migratory birds, and has supported an extensive fishery in the past.

For many years after the accidental creation, the lake received an allotment of water from the Colorado River to offset evaporation.  By the 1950s it hosted multiple resorts along the shores, many of which were flooded in the 1970s by tropical storms which raised the lake level temporarily. 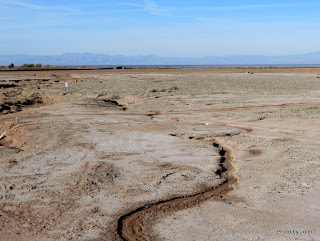 In 2003, make-up water from the Colorado was cut-off in favor of more water going to San Diego and Los Angeles. Since that time, the lake has receded, salinity and toxicity from agricultural runoff has increased, and fish and bird die-offs happen with increasing regularity, creating a stench that sometimes reaches as far as Los Angeles. 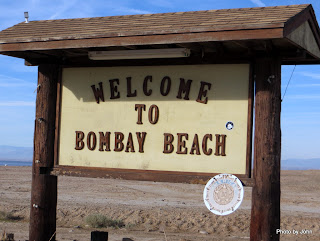 Bombay Beach was once a thriving resort on the northeast shore. 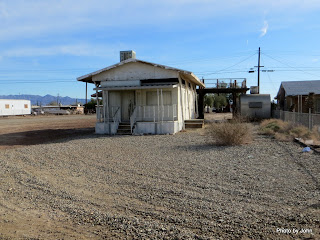 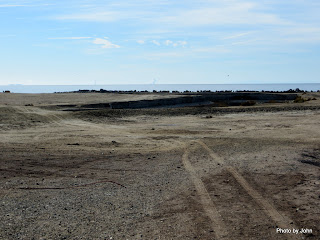 as well as a high and dry marina. 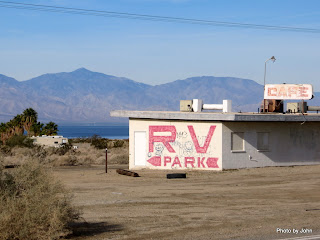 All along the receding shores, businesses are dead or dying.

North of the lake, agriculture appears alive and well while it contributes its share to the ecological disaster of the Salton Sea. 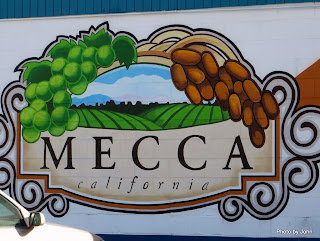 After all that, I did get to Mecca, one of the string of small towns along Highway 111 where I found this sign on the side of the Post Office and some wonderful Madjool dates.
Posted by Just Finding Our Way at 12:00 PM