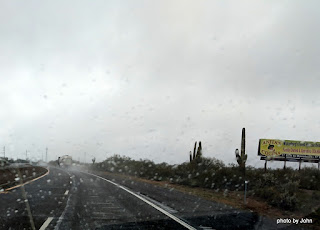 For several years, we've talked about visiting Death Valley, but it always seemed the conversations revolved around the late May northbound, or August southbound time frames. Apparently August is Death Valley National Park's busiest month which just goes to show how many people are lacking sanity. 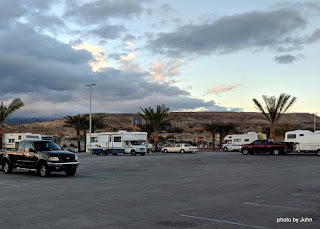 With the government 'partial' shutdown in place, we knew the experience would be impacted but we decided to go anyway. After rain most of the way, we parked for the night at the Riverside in Laughlin and enjoyed dinner with one of our dear river rat friends. 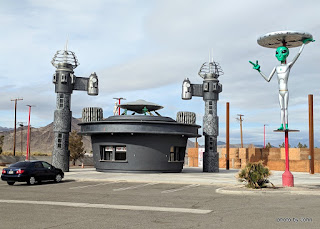 We headed from Searchlight to Baker, avoiding Las Vegas traffic, and approached the park from the south. Baker is "interesting" but I wouldn't want to live there! We'd fueled in Bullhead City at $2.20 but wanted to top off the tank because of the long distances in the park. Fuel in Baker varied between $4.25 and $4.50. 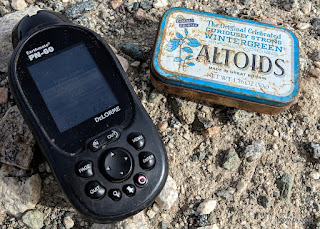 I spent some time before departure looking for places where we could get off the road with the truck and trailer so that BJ could stretch. My planning was good enough that there just happened to be a geocache at almost all of the stretch breaks. 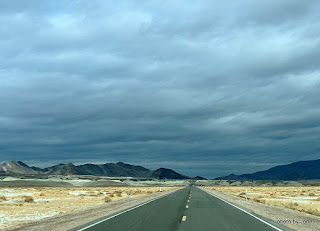 We didn't have any rain, but it sure looked like it on the second day. 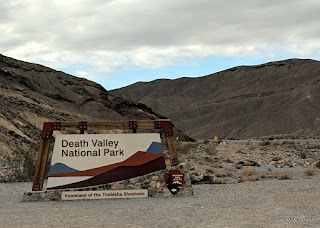 We arrived at the park boundary west of Death Valley Junction, and saw slivers of blue sky ahead of us. 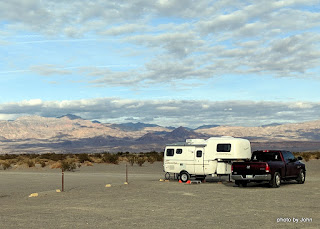 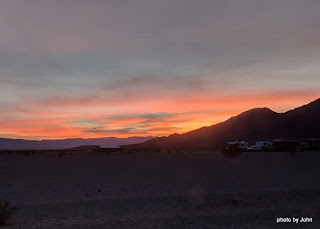 The sunrise the next morning through a very dirty window, looked very inviting. After breakfast, we headed back to explore the central portion of the park. 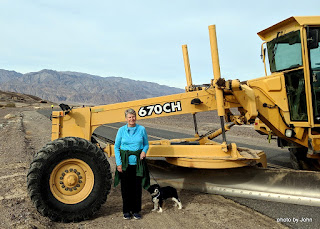 Some roads were gated off. This one had been open the day before when we went up to Stovepipe Wells, but now our first stop of the day had equipment blocking the road to the parking lot. While you couldn't drive, you could walk to visit the mill. Turk couldn't walk on the path, but he could walk on the road. 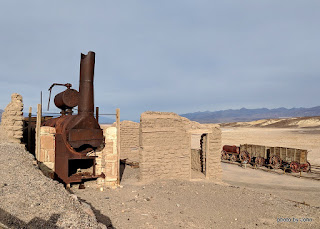 I'm old enough to remember 20 Mule Team Borax advertised on the radio so I was really looking forward to this stop. The most interesting tidbit was that they couldn't process borax during the summer since it won't crystallize at temps above 120 degrees. 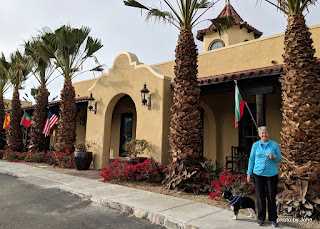 We stopped at Furnace Creek and wandered a bit. These facilities were built to attract tourists by the railroad and the borax company when the borax business slowed down. Still very nice! 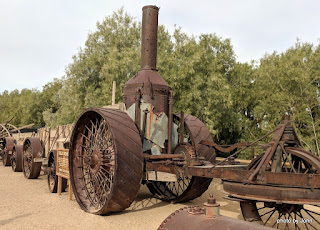 The museum was closed, but the yard full of equipment displays was open. This steam tractor replaced the 20 Mule teams before the railroad replaced the steam tractor. The mules pulled 30 ton wagon trains 163 miles from Death Valley. 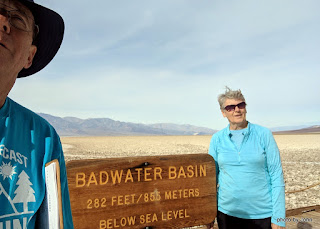 We went as far south as Badwater Basin, just so we could say we've been to the lowest spot in the U.S. How low can you go?? 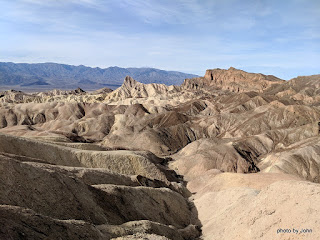 After checking out the salt growth in the basin we headed back to view the Badlands. If we hadn't had Turk along, we could have been enticed into a hike through this area. Turned out the weather was perfect for hiking - highs in the mid 60's.

I'm glad we visited in the winter, and it's on my list to return. There's LOTS that we won't have time to see (or opportunity due to locked gates) this time.