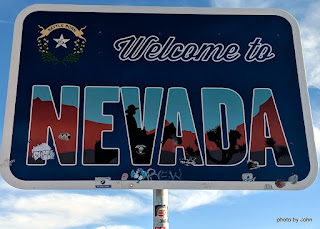 Our second full day at Stovepipe Wells had us heading to Nevada, not only in the hopes of cheaper gas and the start of a one-way back road, 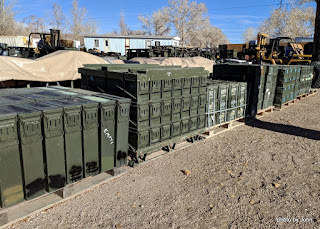 but I wanted to check out a place with a geocache called Geocacher's Heaven. When we spotted this outfit that deals in used ammo cans, we could understand the name. 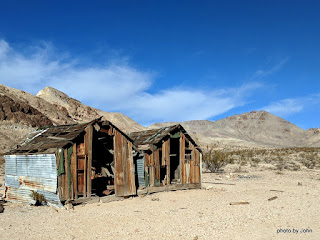 The other planned stop before we started our back road jaunt was a visit to Rhyolite. The site is now managed by BLM and has a paved road, 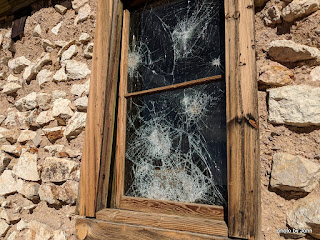 but that hasn't stopped vandals over the years. 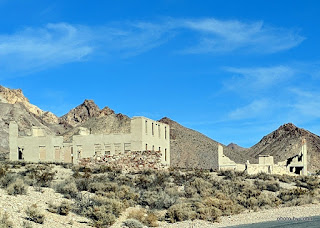 Rhyolite was a going concern for a few years in the early 1900's but was totally deserted within 15 years or so. Portions of several large buildings remain but many of the smaller ones were moved to Beatty years ago. 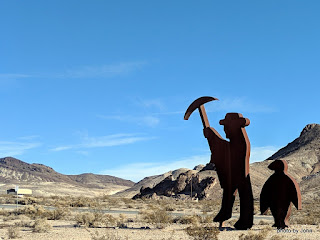 including "The Last Supper" by Polish-Belgian artist Albert Szukalski. 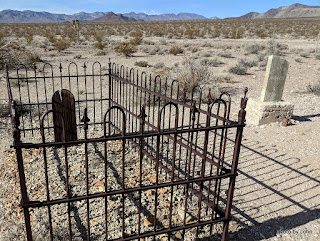 On our way out of town we stopped to visit the cemetery. Some graves are still obvious, but many of the wooden markers are long gone and the wood ones that remain are unreadable. 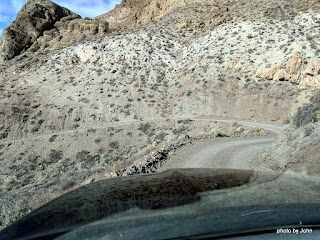 After our visit to Rhyolite, we headed out on the 27 mile road to Leadfield and Titus Canyon. Turns out, this is Death Valley National Park's most popular back road trip. We saw a few other vehicles, but often had the place to ourselves. The road was steep in places and occasionally had large potholes that required high clearance or avoidance. 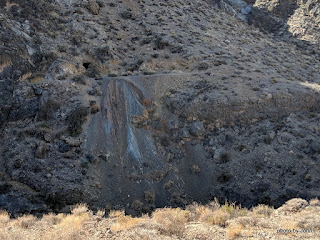 I discovered that rough roads are great for conning the Fitbit that I was actually working. The road was such that if you wanted to consider the view, it was essential to stop first. We spotted this small mine shortly before we reached Leadfield. 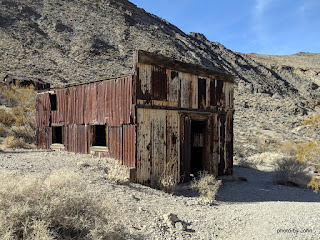 Leadfield was created in the 1920s. According to Wikipedia, "The product of extensive and fraudulent advertising by the Western Lead Mine Company and C.C. Julian, the town boomed in 1925. His advertising posters showed steamboats navigating the Amargosa River to Leadfield, ignoring the fact that the Amargosa River is dry much of the time and does not run within 20 miles of Leadfield." 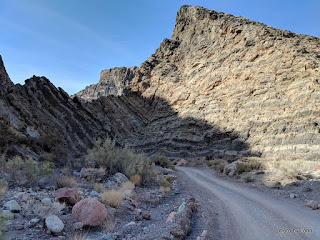 As a fan of history, rust, and ghost towns, I was looking forward to Leadfield. Turns out, the best part of the trip was the drive out of town through Titus Canyon. The rock, and the road were twisted! 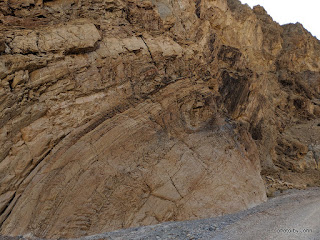 It's times like these I wish I'd taken a geology class somewhere along the line. 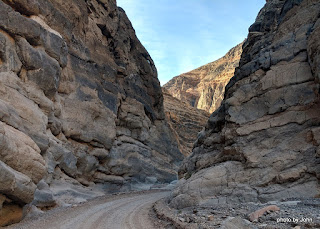 I understand now why the park operates this as a one way road!

While Rhyolite and Leadfield were interesting, the drive was the highlight of the day!
Posted by Just Finding Our Way at 2:31 PM