While I was in Seattle for my sister's memorial, I received an amazing letter from the folks at the Geocaching Headquarters. 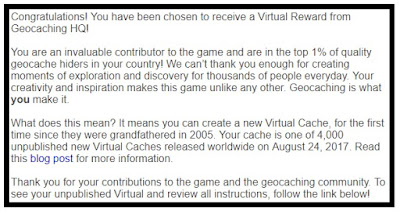 I was amazed to see that Geocaching HQ considered me to be in the top %1 of geocachers, and I had as many questions as others did about how they selected the fortunate few. HQ followed up with an additional statement about the algorithm they used. It looks like my efforts to build caches that people enjoy paid unexpected dividends. 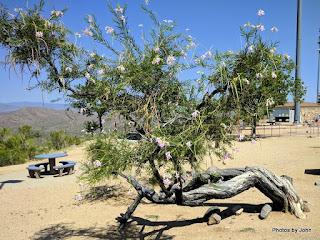 Virtual caches often highlight historic locations or memorials that aren't appropriate locations for a physical cache. I considered highlighting Falcon Field to draw attention to the role Mesa played in training British pilots in WWII. After considering some other locations, BJ and I headed to the rest area at Sunset Point to do some homework. 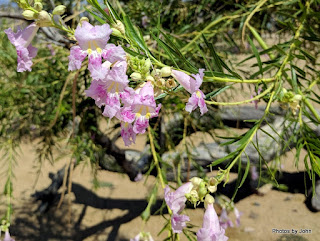 Even though the tree looks like it's had a rough life, the blossoms on the Desert Willow were beautiful.

This tree is right by the sidewalk but most folks at the rest stop don't notice it. 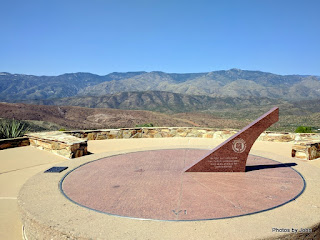 A few steps further away, and slightly below the level of most of the rest area is a large sundial made of granite mounted in concrete. Most folks don't even realize its there, and even fewer know why its there. 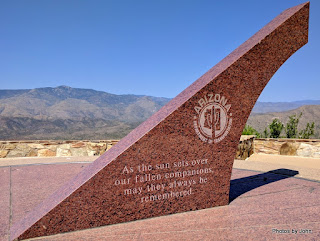 This sundial was created by Arizona Department of Transportation in the late 1990's to honor the memory of their employees who were killed on duty. The memorial now has the names of 33 people who have given their lives in service to the citizens and visitors in Arizona.

The text on the gnomon reads, "As the sun sets over our fallen companions, may they always be remembered."

Since this sundial is easily accessed but rarely visited, I used my opportunity to create a rare virtual cache (GC7BA2C) at this location. I hope that it will draw more people to visit and get them to slow down when passing highway workers.

Posted by Just Finding Our Way at 7:00 PM