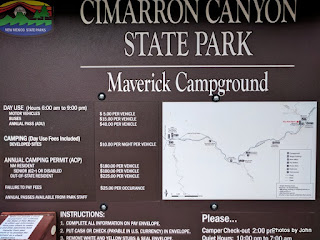 Maverick Campground in
Cimarron Canyon State Park was our home for the night. Cimarron Canyon has three campgrounds in the park - Maverick is apparently the largest of the three. 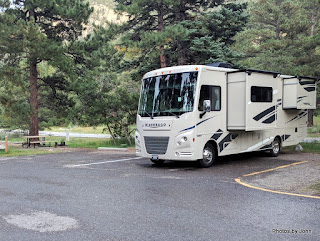 The park is long and skinny, just a strip along the side of Highway 64 between Ute Park and Eagle Nest, New Mexico.

There are no hookups at this campground, so the rate is $10 per night as it is in all New Mexico state parks. The highway quiets down nicely at night. 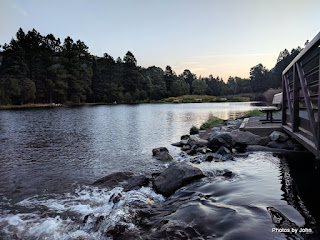 The campground is sandwiched between the highway and three small lakes that were formed when gravel was removed for highway construction and then the Cimarron River was re routed through the resulting pits. 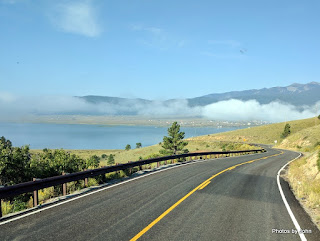 The next morning, we headed to Eagle Nest and points west and south. 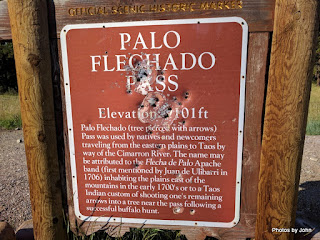 Apparently, someone figured that the elevation of Palo Flechado Pass between Angel Fire and Taos should be targeted. Turns out, the elevation was 9,101 feet according to the sign.

Our targets for the day were to spend some time in Santa Fe before dropping Jeff at the Albuquerque airport. 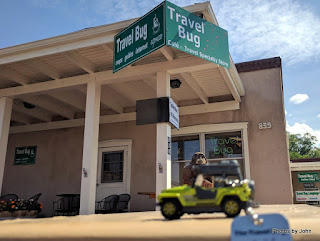 We figured we didn't have enough time to visit both Los Alamos and Santa Fe so we decided on Santa Fe. What we didn't realize was that they would be celebrating Fiestas De Santa Fe which meant the cost of parking was a larcenous $30 for the RV. For geocachers, RV parking is across the street from the Travel Bug coffee and map shop. 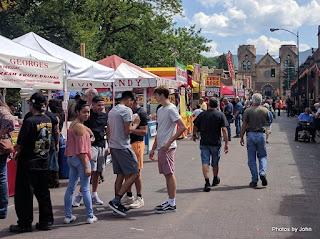 We managed to find a restaurant with available seating and enjoyed the best Huevos Rancheros that I've ever had before wandering the streets around the plaza for a while. 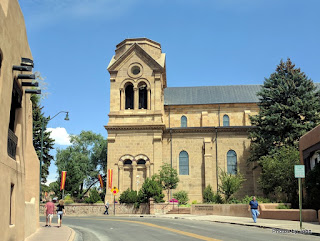 With all the people clustered around the plaza, the side streets were relatively empty, unless you were trying to negotiate them with an RV when they suddenly became crammed with traffic.

Making our stop at the ABQ airport was also challenging. They have height restrictions, but the signs don't say what the maximum height is or how to route to avoid those restrictions. Turns out we had over a foot of clearance. 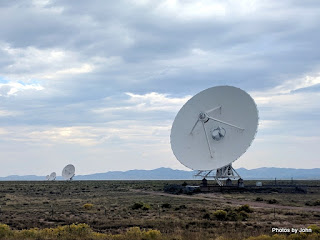 After dropping Jeff at the airport so he could go back to work, I headed south. My plans were to overnight at the Walmart in Socorro but it was too hot there so I headed west on Highway 60, looking to gain some elevation. I passed the Very Large Array. There are 27 of these large dishes interconnected to function as one massive antenna. 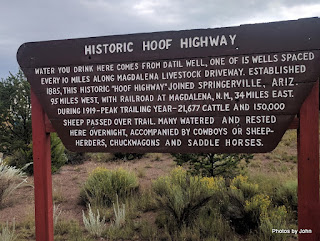 Home for the night was the Datil Well BLM campground. The regular price for this campground is $5. The sites tend to be quite sloped, but I found an available one that was close enough that I could get leveled up.

One of the reasons I chose this location was to position me for breakfast in Pie Town the next morning. 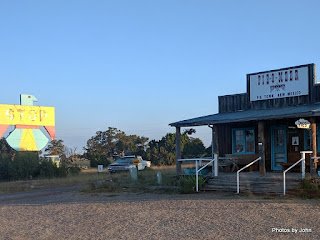 Unfortunately, every restaurant in Pie Town was closed when I went through. So much for world famous pie for breakfast! 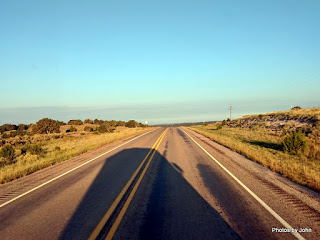 Instead, I chased my shadow westward to Quemado where I found more Huevos Rancheros at the Largo Cafe. Not quite as good as the ones I enjoyed the previous morning at the Burrito Company in Santa Fe, but still very good.

The rest of the trip was all familiar roads, and I was home by noon. Over 1600 miles in less than 75 hours. The rig is officially broken in, and now it's time to start on the mod list.
Posted by Just Finding Our Way at 2:30 PM