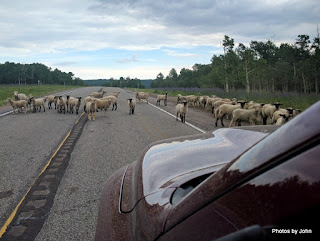 We'd noticed several shepherd's camps on our way to Lake Canyon Recreation Area, but didn't see any sheep. On our way back down the mountain, we spotted several flocks including this one that apparently had traffic duty. 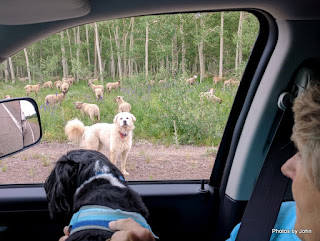 While we waited for the road to clear, Turk checked to see if there were any openings for apprentice sheep dogs but the boss wasn't interested. 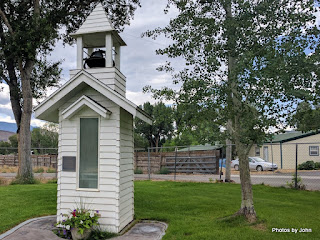 We stopped in a few towns along the way, visiting some virtual caches that we'd passed on the way north in May. This one, in the little town (pop. 406) of Marysvale, was very interesting. It highlighted a beautiful little pocket park that was a memorial to local servicemen. 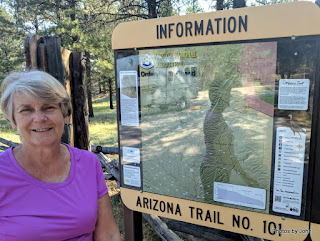 We were going to overnight in Kanab, Utah but it was too hot so we kept going, gaining a couple thousand feet in elevation before camping at the Forest Service campground in Jacob Lake, AZ.

The next morning we stopped at a very popular cache located near where the Arizona Trail crosses the highway, before continuing on down the hill. 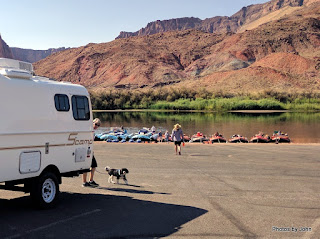 Since we were in the neighborhood, we had to stop by the launch ramp at Lees Ferry, just to see what was there. There were at least two commercial motor rig trips as well as a commercial oar rig trip waiting for their passengers. Just down stream, the rangers were doing their mandatory briefing before releasing the two private trips that were lucky enough to get launch slots. 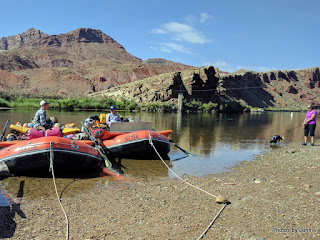 Turk wasted no time heading down to wade in the river while I chatted with a couple of the boatmen. 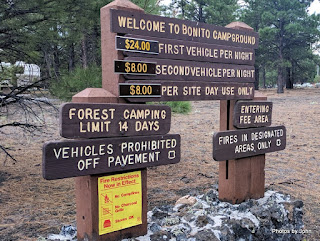 Our last night on the road for this trip was at Bonito Campground. It's a Forest Service campground just outside of the Sunset Crater Volcano National Monument borders. Normally, we would boondock on the other side of the highway, but this campground didn't have any reviews in Campendium so we gave it a try simply so we could write a review. 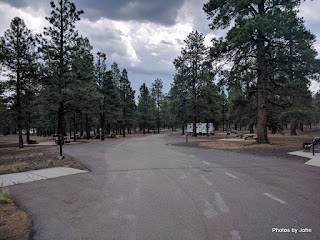 The campground was neat and clean, but many of the parallel parking style sites were on the wrong side of the one way road, and nearly every site required leveling, sometime significant leveling. The campground was only about 20% full when we pulled in, but by sundown, about 75% of the sites were full.

All in all, it's been a good trip. It's going to be HOT when we get home!