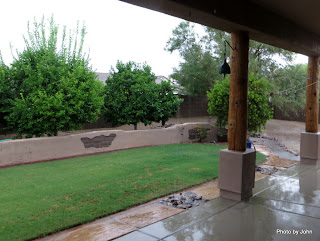 It's been a bit surprising to see how much has changed around here in the four plus months that we were gone. The Mexican lime tree, although it was pruned before we left, decided to send suckers to the sky. What hasn't changed is the monsoon storms and the Arizona heat! Our daughter and her fiance did a wonderful job keeping the landscaping in check. 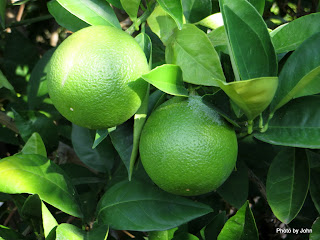 I was really surprised to see bumper crops on the lemon, Mexican lime, and orange trees. Still green of course, but looking really good. Usually one or two of the trees decide to bear but it looks like it will be all three this year.

As we drove around town, we were surprised at the number of new businesses that have just opened or that are advertising openings in the near future. You leave town for a while and the world changes.

Turk's situation continues changing. He's scheduled for his third surgery tomorrow although we're hoping that this one will not be as involved as the first two. Still trying to get his incision healed.
Posted by Just Finding Our Way at 7:23 PM