This blog post is very different from my normal style. For my regular readers, feel free to ignore it. It’s my attempt to try to capture some helpful information about paddle powered trips on the flatwater sections of the Green River in Utah. 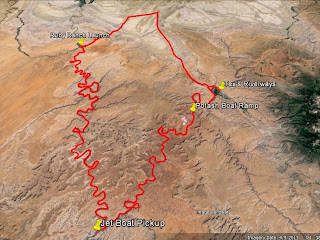 The flatwater portion of the Green River is commonly included in lists of the best flatwater float trips in the United States and for good reason. Amazingly enough, most of these lists seem to think you should be in a hurry. It’s 120 miles from the town of Green River to the confluence and I’ve seen at least one magazine publisher that says you could do it in 3 days without providing any of the caveats.

If you’re going to do the Green, you have some choices to make. Spring, Summer, or Fall?Canoe, Kayak, SUP, or Raft? Labyrinth Canyon, Stillwater Canyon, or both? Green River State Park, Crystal Geyser, Ruby Ranch, or Mineral Bottom launch point? Solo, small group, or large group? Freeze dried or gourmet? How Fast? Obviously, personal preferences, finances, time availability, and skills are going to impact your choices.

Which Season?Lots of people do the Green in the spring because they like the faster currents that come with the higher water levels. You can check current or historic water levels at Green River and now also at Mineral Bottom. The downside of spring is fewer campsites since you’ll be limited to just high-water sites. Summer is HOT but many people do it then because that’s when they have vacation. Fall is my personal preference. Water levels are typically low and flow is slower but sandbar camps are plentiful and most of the bugs are gone. 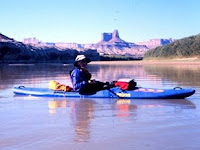 Boat Choice? I started doing the Green 20 years ago. The first couple years, I used a large whitewater kayak because that’s what I had. For a couple years after that, I used wood strip sea kayaks because they had more space and speed, but since then I’ve used a solo or a tandem canoe since it’s much easier to haul the groover* in a canoe than a kayak. In the past couple years, we’ve seen an increasing number of stand-up paddleboards. Only once did we see a solo, self-supported SUP. Usually it’s a small group of SUPs with a canoe or two to help haul their gear. It’s not unusual to see rafts, but… if you see a raft on the Stillwater section, they are headed to the whitewater of Cataract Canyon and taking out near Hite on Lake Powell. *All feces must be hauled out using an approved toilet system in accordance with your river permit.

Which Section? John Wesley Powell named Labyrinth and Stillwater canyons during his explorations of the Green and Colorado rivers in the mid 1800’s. Labyrinth Canyon is the upper section and includes the famous Bow Knot bend. It is managed by the BLM and requires a free permit. Stillwater Canyon technically starts below Mineral Bottom, but the Mineral Bottom boat ramp is commonly used to differentiate between the two sections. The Stillwater Canyon section flows through Canyonlands National Park. The Park starts at approximately river mile 47 and requires a permit issued by the NPS. There’s no charge for the flatwater day use permit, but the flatwater overnight permit carries a $30 reservation fee plus $20 per person.

Which Launch Point? There are four launch points on the flatwater portion of the Green River.

Group Size - The first time I did a section of the Green there were just two of us using whitewater boats. The next year we invited anyone that wanted to go from the local paddling club and ended up with 10 on the trip. Typically we’ve had 4 to 6 on a trip which keeps it small enough to be able to fit into some smaller campsites. The Labyrinth permit is limited to 25 people. The Canyonlands permit is limited to 40 which seems totally insane to me, but then enjoying the quiet while watching the shadows on the cliffs is what draws me back nearly every year. Every year we do see solos on the river and I’ve thought about it at times but I’ve never had my “must invites” turn down a trip invitation. 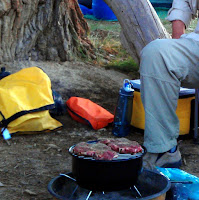 Food Style - We’ve done gourmet including barbequed ribeye steaks at Anderson Bottom one year and fresh made cinnamon rolls at the confluence another year, but tend towards boxed or canned meals from the grocery store. Most trips will be seen hauling ice chests but we’ve always gone lighter and smaller since I’m lazy and don’t want to handle a bunch of extra stuff.

How Fast depends on you. We clearly choose to travel slower than most groups. I’ve seen lots of groups planning 20 mile days in the fall but we enjoy a slower pace. Our trip pace has slowed down over the years and we’ll plan in at least one weather day (or two or three) since we’ve discovered breaking down and setting up camp is work that really doesn’t have to happen every day. Camps that provide some shade and a view and a place to hike will get a layover day if possible. Our latest trip was the 52 mile Stillwater canyon section. We took 9 days (including the jetboat shuttle day) while most groups we saw on the river were doing it in 5 days or so, including the upstream shuttle.

Since camps are first come and sandbars change every year, you may need a plan B and plan C. Since we always do the trip in late September to early October, we tend to avoid highwater (ledge) camps since they’re more work to get the gear from the boats to the camp and back. Sandbars are typically our first choice for overnight stops but I’ll admit to having a short list of highwater camps that we love, especially if we have a spare weather day to spend.

While I approach this (as do most people) from a paddle powered perspective, it is possible to see an occasional outboard on a jon boat or a raft or the NPS J-rigs. For years, the towns of Green River and Moab sponsored the Friendship Cruise over Memorial Day weekend which involved power boats going down the Green to the confluence and then up the Colorado to the Potash boat ramp outside of Moab. The Friendship Cruise website hasn’t been updated in years so I don’t know the current status.

I’ve done one or more sections of the Green 16 times in the past 20 years. Twice I’ve seen someone paddling upstream, once on the Green river and once on the Colorado. The guy on the Green (20 years ago) had paddled to the confluence and was working his way back to Mineral Bottom when we saw him. I have no idea how many days it took him!

Helpful Sources The Belknap's Waterproof Canyonlands River Guide seems to be the default, but I prefer the much larger RiverMaps Guide to the Colorado & Green Rivers in the Canyonlands of Utah & Colorado because of the much better maps. The National Geographic Trails Illustrated map #210 of Canyonlands is reasonably useful, but only for Mineral Bottom down. It will give you the big picture, but the scale leaves you wanting more detail. Kelsey’s River Guide to Canyonlands National Park and Vicinity has abominable maps but in some ways it's my favorite because of the excellent information about the human history in the canyons. For example, he tells about the construction of the Mineral Bottom (Horsethief trail) road, the loss of a D8 Caterpillar while ferrying across the river at the lower end of Woodruff Bottom, and points out spots where uranium adits and mines were located. (The four links in this paragraph all point to Amazon. I do NOT get any benefit from Amazon.)

Shuttles: There are several services that support Labyrinth Canyon. Some have equipment rental as well as shuttle service while others provide just shuttle of your personal vehicle. They can be located wtih a quick Google search. There are two permit holders for jet boat services from Spanish Bottom and the confluence back to Moab. The past couple of years, one of those operators has not operated in the fall low-water season. I’ve always used Tex’s Riverways for our Stillwater Canyon trips and can’t say enough good stuff about them. The jet boat back up the Colorado to Moab is the cherry to top off a wonderful Green River trip full of new memories. 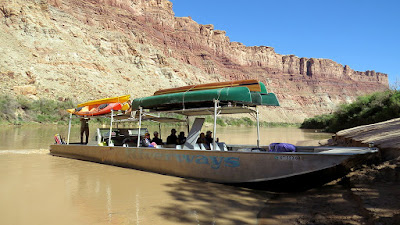