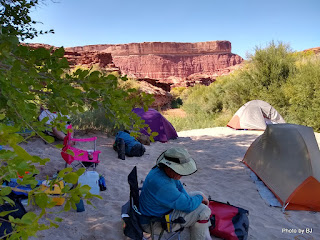 One of the joys of Deadhorse is that there is afternoon shade. After getting camp set up on the sand berm at the mouth of the wash we went off to explore. The high camp (another 10' higher and a slippery path) was huge but would have been lots of work to access. 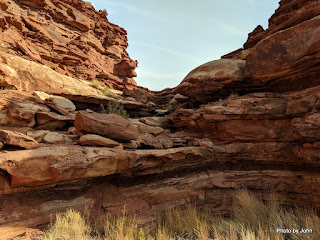 We were planning a layover day specifically so that we could go hiking. In 2015, we'd hiked to Newspaper Rock from the lower Cabin Bottom campsite. This time, we wanted to try the route from the other direction. It involved finding a way up the dry fall from the north side of the perched meander not far up the canyon from camp. 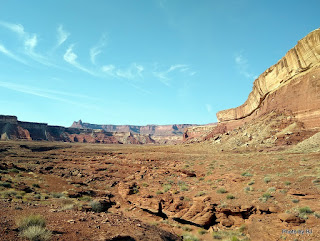 Route finding skills were important, not only for working up through the dry falls but also keeping track of the place to start back down on our return. Once we were up on the mesa, the view was expansive in all directions and the river disappeared - at least for awhile. 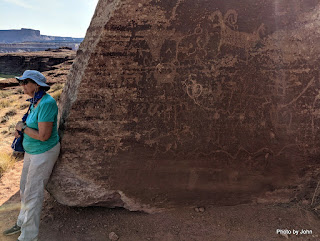 I didn't think to try to recreate the picture from our 2015 trip, but this one, while tighter, was from the same location. (And, yes, BJ checked to confirm there were no petroglyphs where she was leaning.) All told, it was about 2 miles round trip from camp. 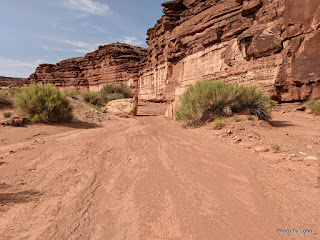 When we got back down to the wash in the canyon, the others went back to camp while I walked up the canyon. I heard that it dead-ended in a dry fall, but I didn't get that far since I'd told them I would be back in camp within an hour. Next time... 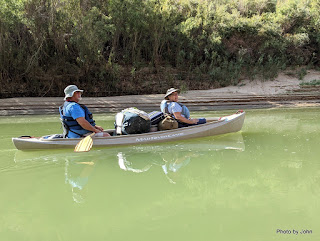 On Saturday, October 3rd, we left Deadhorse to continue downstream. Our campanions did a great job of demonstrating the amount of effort required to navigate on this calm morning. 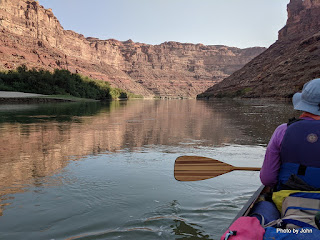 This is the first year that we've passed the mouth of Horse canyon and found no bugs. On the flip side, it was much splashier than any of us remembered. We weren't sure where we were going to end up but we knew we needed to "waste" some time. 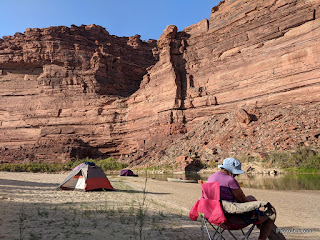 The sandbar on the inside of the corner at river mile 11.7 became our home for the evening. It wasn't as nice as previous years and we needed to spread out to find level spots for our tents, but it did offer some afternoon shade. 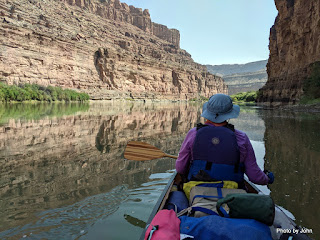 The next day we continued our drift downstream. We'd heard that there was a huge sandbar in the mouth of Water Canyon but it turned out to be on river left across from the canyon. Since it didn't have any shade, we gave it a pass and continued on, rapidly running out of river. 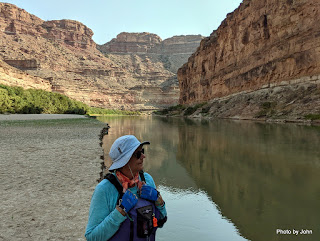 We thought of going to the confluence and taking a layover day there, but we'd heard that Upper Spanish was marginal this year, while both middle and lower involve very steep carries to high camps. Instead, we called a sandbar on the left at river mile 3 our home. 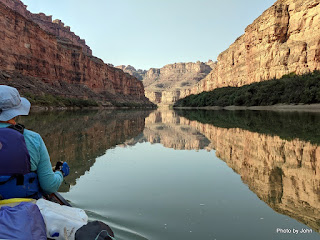 The next morning, we didn't leave camp until 10 a.m. because we didn't want to arrive at the confluence until after the jet boat had done its pickups. That wait put the sun angle just right for yet another reflection picture, this time about river mile 2. 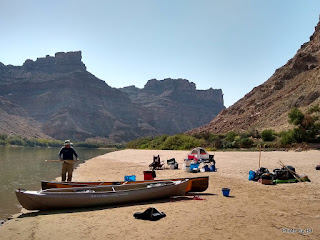 The sandbar on river right at the confluence was huge this year. We washed the boats, ate some lunch, and then headed across the expanse of sand with our chairs to sit in the shade of a large tree at the base of the hill. 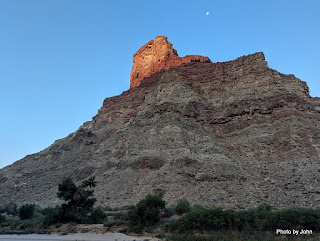 It was a lazy morning for our last morning on the river for this trip, watching the sunlight start its way down the hill while the moon continued its travel towards the west. 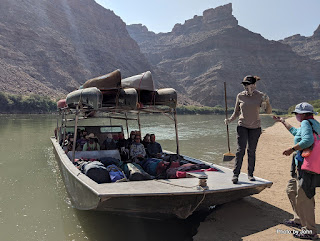 Our chariot passed by, right on schedule, and then returned after picking up groups that had camped further down the Colorado. Our group of four and another group of two loaded here and we headed upstream with another fun Green River trip in the books.
Posted by Just Finding Our Way at 10:25 AM