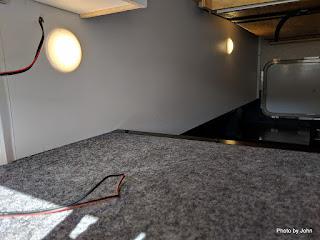 Time is running out to get all the projects done on Jeff's Vista, but the list is getting very short as well. One of the projects was to change the stock lights above the bed. The stock puck lights are powered through a single switch and point straight down which isn't very conducive to one person reading while the other tries to sleep. They got re-purposed for lighting in the rear luggage bay. 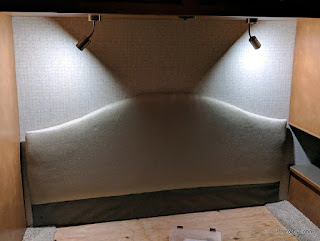 They were replaced with a couple flexible LED fixtures that we picked up in Quartzsite. 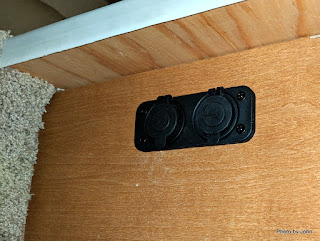 Like nearly all RVs today, the manufacturer seems to assume that you're going to be plugged in or willing to listen to a generator. This rig needed more 12 volt outlets to be functional for dry camping. Dual outlets were placed on each side of the bed pedestal. One outlet has two USB ports while the other outlet accepts a cigarette lighter style plug. 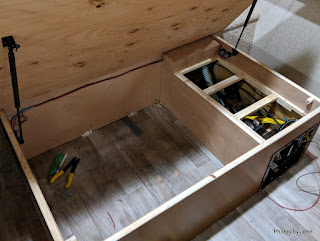 The project was relatively easy since the power converter lives in the same space. It was just a matter of taking the plywood cover off the top of the area behind the converter and the faceplate from the converter, drilling the holes for the outlets, and then running the wires. 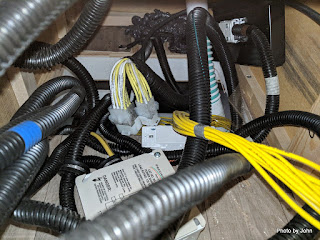 I made it a point to run the wire more neatly than the factory wiring. Apparently they figure no one will ever look... 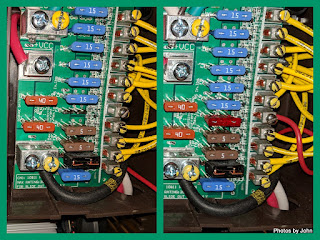 We were fortunately enough to have one empty slot on the 12 volt side, between the blue 15 amp and the brown 5 amp fuses. I picked up the positive feed there and installed a 10 amp fuse. 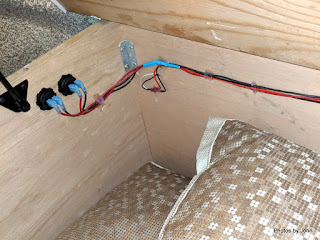 I was going to run the wire in a plastic conduit but the conduit I brought with me was too small so I used the same technique that the Scamp factory uses to route their wiring - it's tacked in place with hot glue. Both power and ground have a second pigtail soldered into the main lead about 10" back to feed the second outlet. The solder joint is then insulated with shrink tubing - blue because that was what I had in stock.

With these projects done, I think there's just one thing left on the list. I still need to install a power lead behind the instrument panel to power the TPMS system.
Posted by Just Finding Our Way at 2:30 PM