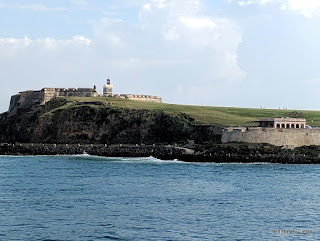 When we booked this cruise there were still some open questions about access to a couple of the ports. By the time we sailed, all of the ports were open but there was still some visible hurricane damage. Approaching San Juan, Puerto Rico, everything looked beautiful. I assumed a fort that had been there for centuries would survive yet another hurricane. 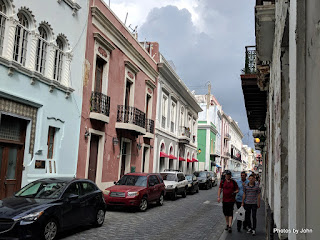 The buildings were colorful and the streets narrow, but I’d hoped for more of the spectacular doors like we’d seen in the old city portion of Cartagena last year. In our wandering through the city, we never saw anything comparable to Cartagena doors. 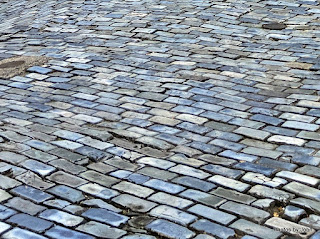 Perhaps the most memorable thing for me was the beautiful blue cobblestone tiling the streets.

We did go out to the east end of the island that evening to kayak a bioluminescent lagoon. Once we got out of old town, we saw lots more ‘blue roofs’ covered with blue tarps. The driver said that 40% of the island still lacks power and that some of the large resorts are still full of FEMA employees. 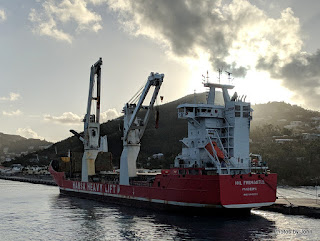 The next morning, arriving in St. Thomas, U.S.Virgin Islands, the first thing I noticed was a somewhat unusual ship at the dock. The Fremantle was built as a heavy lift vessel, outfitted with three massive cranes. 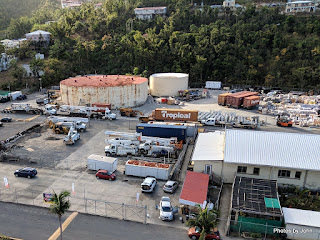 All around the dock long lines of power utility trucks and equipment from various companies. They had used the area near the docks as a staging area for the utility repairs after the hurricanes. 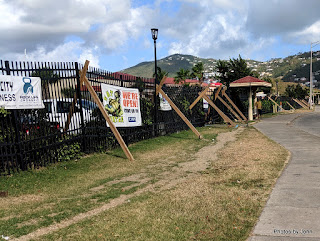 Around town, fences were propped up, roofs were sporting blue, and areas were closed due to damage but the community had made a lot of progress and most businesses were open. 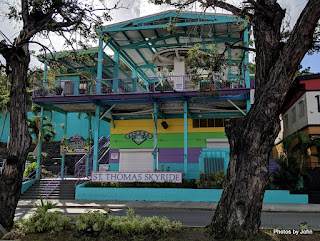 Internet research suggested the Skyride gondola was repaired and operating but when we got there, the terminal was all boarded up. I'd hoped for a ride to the top of the hill, but not today. 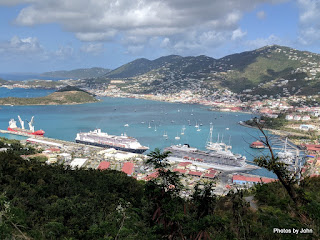 Eventually we found a way to the top of the hill where there was a beautiful view of the harbor, some high class homes, and a geocache that had waited over two weeks for a First To Find. While at the top of the hill, I chatted with a roofing crew that still had jobs on the books that would be waiting months before crews could get to them. 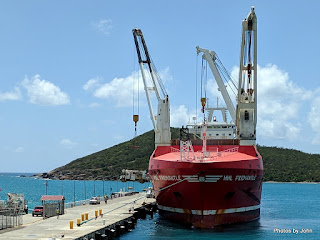 We got back to the Rotterdam in time to see the Fremantle loading the last of the utility equipment. They'd finished their work repairing the island's infrastructure and it was time to head home. 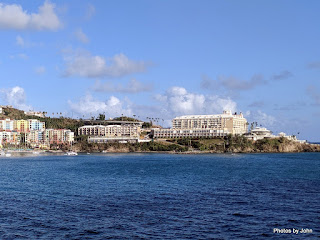 As we departed St. Thomas, we passed some major resorts that were just now getting back to regular operations.

Puerto Rico and Saint Thomas took hard hits this year and both have a long way to go before everything is repaired, but both locations are open for business and clearly appreciate visitors.