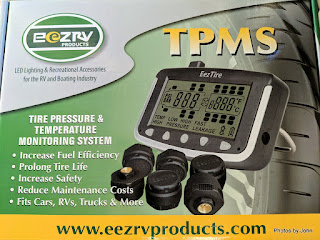 Jeff did some research (sometimes known as what would Technomadia do?) and selected the EezTire TPMS system for his rig. Initially, he was planning on the flow-through sensors but we ended up selecting the cap style sensor since they were notably smaller. 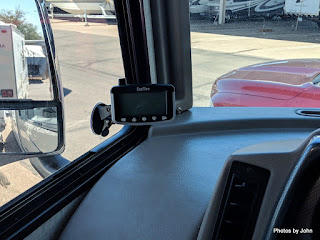 He decided that he wanted the system installed using the supplied vaccum mount so that there weren't any new holes added to the dash. The selected position keeps the sightlines to the mirror and the windshield clear.

We had a couple options for power, but wanted to avoid even more cigarette lighter style plugs with cords dangling around. The other option was to used the provided direct wiring cord. I just needed to find a source of keyed power so that the TPMS would be powered only when the ignition key was turned on. 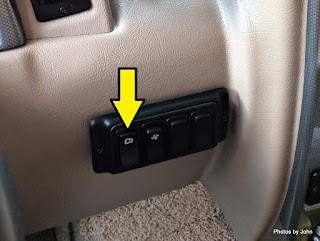 I started at the fuse panel below the dash in the left front corner but bombed out on anything that was easily accessible. Finally found what I was looking for at the back of the radio override switch. This switch had a ground wire, several always hot wires, and one keyed power wire. 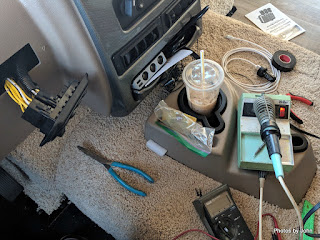 I got my work area set up. I discovered there are some advantages to having an inverter. Works great for when you need to power the soldering iron and don't want to start the noise maker. It's worth noting that Mickey D's iced coffee is essential fuel for this project! 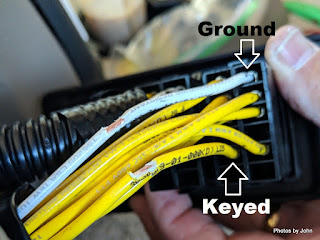 I half stripped short sections of the ground and keyed power wires, and then soldered the lead that was provided with the TPMS system. 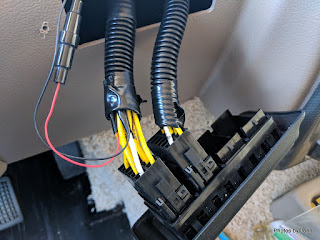 Some electrical tape on the connections, sliding the conduit back in position, and we were good to go. 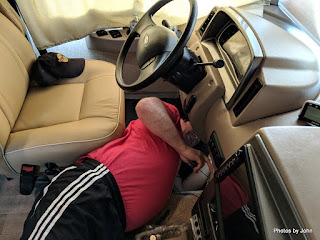 The best part was that Jeff arrived just in time to deal with the wire routing behind the dash. 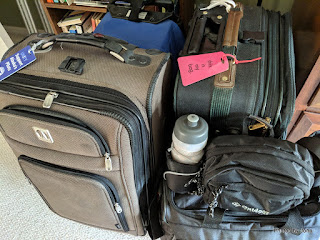 He was also responsible for taking us to the airport a couple hours before he picked up his family and started the first segment of their multi segment roadtrip to Alaska with their motorhome.
Posted by Just Finding Our Way at 2:30 PM