I thought I had everything in place in time for the geocaching events in Apache Junction. After I prepared the last blog post, I got a call from the Fire Department asking me to move two of the three caches that they'd approved on their property. The end result was it bumped one of the other caches because of proximity issues, but I was able to move them to new locations that kept their crews happy. 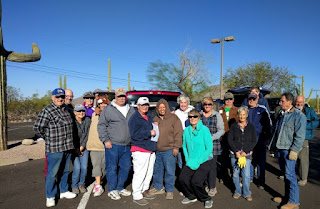 We had 26 people show up on Wednesday morning to help with road cleanup around Prospector Park. In less than an hour, we filled my truck and BJ's Outback full of garbage bags of roadside trash. It's always nice when we can leave an area better than we found it. 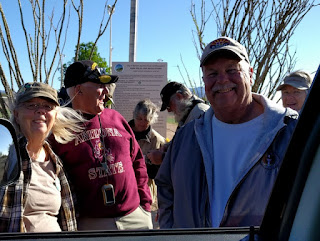 The new caches were scheduled to publish at 10 a.m. but some folks decided to team up and tackle some of the other caches in the area that they hadn't visited. It took eight people and some luck to figure out where the birds had roosted. 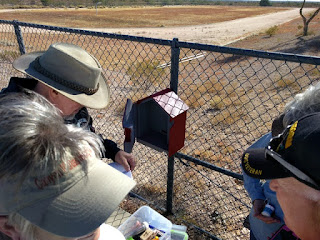 "Is this one of those caches that you need to read many times until clues pop out? Yep! Tricky, tricky, tricky." 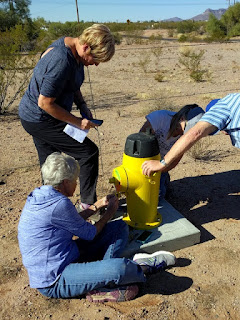 or trying to figure out the figures. This group was the only group to admit to attempting this one on the day of publication. It's been visited by one other group since then and I suspect there will be other people out making the rounds today.

"After gathering what we needed at the other 2 caches, we did some math and ended up here. Hmmm...now what? So we kept reading the description over and over and over again until things started to make sense. Luckily for us, the CO arrived on the scene to watch us sweat. Offering no advice except to "move that hand", he let us work through it. When we had a possible code, he blinked, I think, and then we were in." 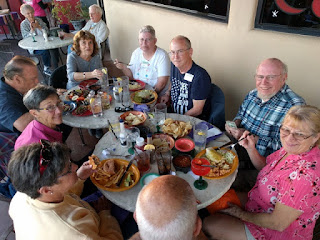 The day ended with a meet & greet event at a local Mexican restaurant hosted by another geocacher. While I typically geocache solo or with BJ, I think it's the creative side of building caches, and the social side of events that I enjoy the most.

No more new caches for awhile although I do have a meeting on Tuesday about another place that might be willing to host a cache...