In mid October I posted a blog post about Patience. Finally, on November 30th, I got an email approving cache placements at some of the locations, just in time for a Geocaching event scheduled for December 6th. This would be the same event that I was hoping to do in early October. Doesn't matter - it's still going to be fun! 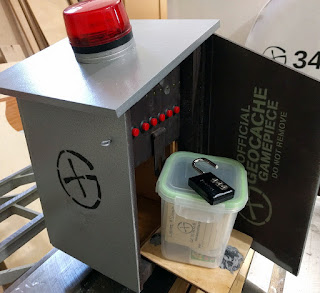 Since I don't think any of my local geocaching friends read my blog, here's a bit more about the special caches that I've built this fall in preparation for this event. Five of them are 'birdhouse' style structures. This one has gone through four color iterations as it's likely placement wandered around the community. This one is called Lights & Siren. There is a series of switches inside the side door that do various things including operating the flashing light on top and a siren inside the structure. Deciphering what the various switches do should result in the code needed for the lock to gain access to the cache container. 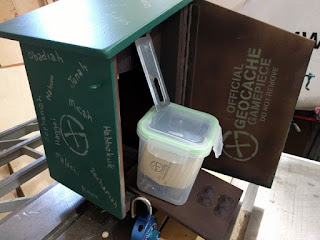 This one uses a similar side-loading structure. It was going to be titled Magnetic Attraction and talk about arson, but now it's going to be placed at a church so I changed the subject. It's now called Old Testament Survey - since the New Testament doesn't have enough books. Three of the books are written over magnets inserted into the structure. Figuring out the ordinal number of those three books provides the numbers for the combination. 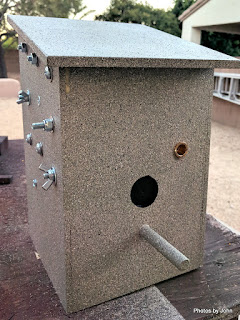 This one has the lock underneath it with the door nearly half way up inside so the lock isn't obvious and it's protected from the weather. This one was going to be titled Loose Connections and talk about the importance of electrical safety in fire prevention, but when the department backed away from their earlier commitment, this one was retitled and placed near a hardware store. There's a similar assortment of hardware on the right side of this one. Touching the correct pair will make the box buzz and light up three colored lights inside. The colors are decoded to provide the combination for the lock. 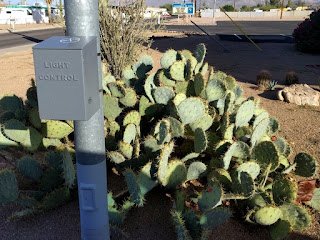 This one is a bit more challenging - I'm hoping it will be fun rather than frustrating, but only time will tell. It uses a magnetic latch for initial access, a 'useless box' switch as a decoy, and a puddle lamp that shines out the back when you press the right button. The puddle lamp reflection can be decoded for the combination.

These caches are designed to be mounted to parking lot poles like this one. If I hang them in trees they disappear!

Those were fun, but these weren't the ones I was really anticipating! 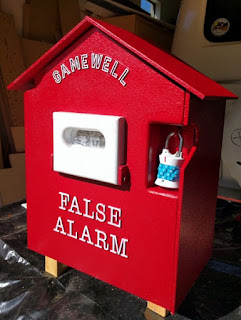 The pile of plywood in the last picture of the last post turned into this cache. It's actually listed as a letterbox hybrid, and uses a wireless doorbell to locate the final from the initial coordinates. It uses a child safety latch to release a tube with the combination for the lock. No sense making it too easy! 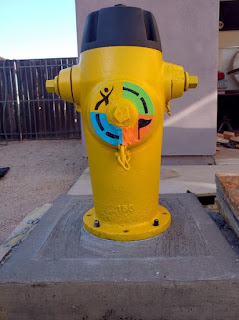 This is the container that started it all. Actually this cache was the result of finding a highly favorited cache elsewhere that used a fake fire hydrant.  I bought a surplus hydrant and rebuilt it, installing a false floor just below the steamer port. Access is through the steamer port after unlocking the padlock. Combination is derived from finding three other caches. This one, False Alarm, and Lights & Siren survived the FD review and are going in place in time for the event. The others have been repurposed and I've found homes for all but one. I have feelers out to several other locations for the last one (that I didn't show you) but don't know if I'll have it in place in time for the event or not.

These are all way overkill, but I have fun building them and dreaming up new ways to create challenging access methods. I've got at least three others in the mental queue but don't know where they might go.
Posted by Just Finding Our Way at 2:30 PM