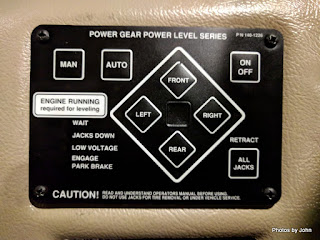 One of the cool items that was stock on Jeff's Vista XL is a set of automatic hydraulic levelers. So much nicer that stacking up boards or Lego blocks.

The manufacturer requires that the jacks are deployed before the slides can be extended. The engine must be running to deploy the jacks or slides, BUT... they're very concerned about someone driving away with the jacks still deployed. 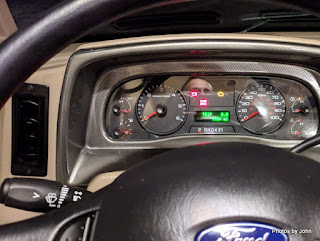 They installed a warning light, but their ergonomics engineer was absent when they did the design. It's not at all visible when an average height person is in the driver's seat. 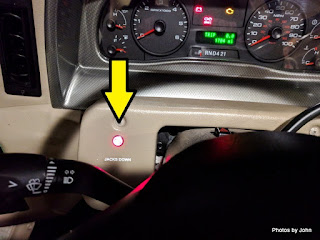 You must lean significantly forward to find the light shining brightly, but totally hidden behind the steering wheel.  It's just a light, installed in a hole in the plastic dash. Apparently no one has ever considered moving the light to a position much more obvious to the driver. 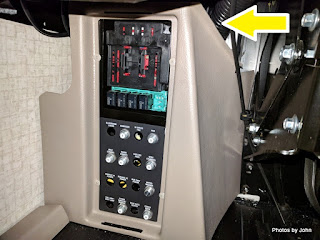 Since the light is essentially useless for its intended function, they also include a horn. The horn should have a warning to not use it near a cemetery because it will wake the dead!. It's so loud that it becomes a safety issue because you rush to get everything closed up so you can kill the horn. Of course, the horn is buried just about as deep as possible, forward of all the circuit breakers by the driver's left leg. 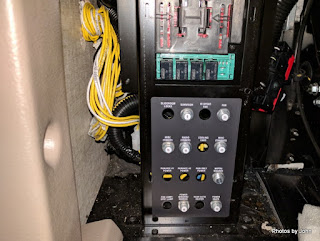 Removing the fairing around the circuit breaker panel provides hand access, but it also makes the horn more painfully loud while you try to locate it. 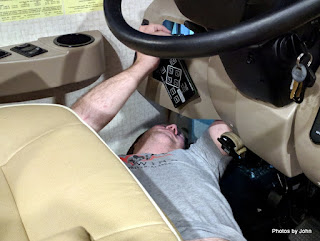 Removing the hydraulic leveler control panel gets an angle so you can get some light into some of the darkest recesses of this corner. It's fair to say access is neither easy nor comfortable. 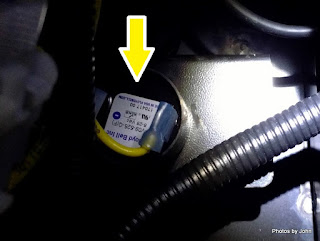 Yup, it's this little critter that is making so much noise it can be heard 200' away with the coach door closed. We debated about removing it entirely, but decided to try a muffler first. I constructed a housing out of 1/2 inch foam that went over the horn. It's still loud, but at least it's not painful. He's going to use it a while and see if that's enough or if it needs even more muzzling.