Urban Camping with a Twist 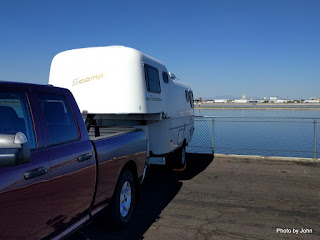 One of the things I've had on my mental list is camping at the race track. Years ago, my daughter and I actively watched NHRA drag races when they were in town, but their ticket prices have risen faster than the cost of medical care. It finally got to the point that I wasn't willing to spend the dollars to enjoy feeling the earth shake and smelling nitromethane fumes. 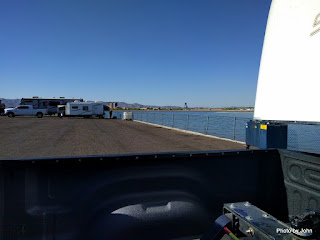 Kelli sent me a note about a race coming to the raceway formerly known as Firebird. The price was right AND there was camping available at an extremely affordable price during the two day event.

I pulled in and parked in what would normally be the fuel dragster pit area, overlooking the lake used for hydroplane racing. The trailer in the background was setting up his pair of Honda generators so I gave him plenty of space. 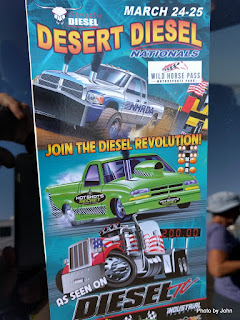 The event was a first for me. Diesel pulling and drag racing put on by the National Hot Rod Diesel Association. On Friday evening I was a bit worried because the pit area for the pulling event was pretty sparse. 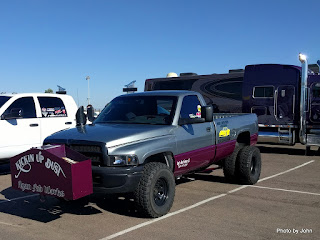 There were quite a few pickups, primarily Cummins powered. There were a couple diesel tractors and a couple four-engined alcohol powered pulling machines. 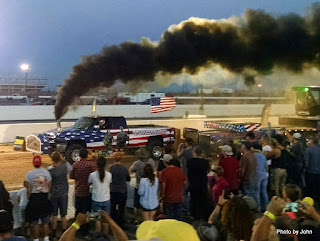 There was one pickup in the event that looked suspiciously like it was set up to pull a fifth wheel on a regular basis. That truck actually broke his hitch trying to pull the sled. 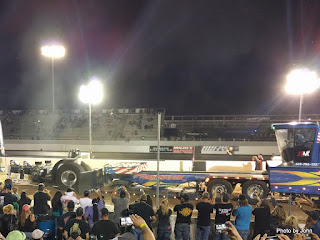 The most interesting thing was the sled. It was custom built using the engine and drive axle from a diesel pusher motor home. When the trucks or tractors were pulling, the drive axle was off the ground. At the end of the pull, front wheels would hydraulically unfold from the sled, raising the front end of the sled and putting the rear drive axle on the ground so the sled to back into position for the next pull. Always wondered where motorhomes went to die. 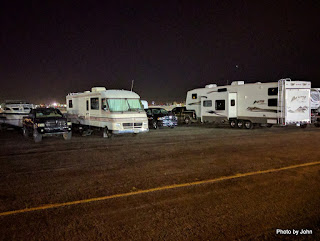 After the pulling event I headed back to my trailer to discover that I have a cabin cruiser, and an older class A rig on one side and a pair of large fifth wheels on the other, complete with surround sound generators. It really didn't matter since the freeway was directly on the other side of the lake. Quiet would not be one of the terms used to describe this boondocking location! 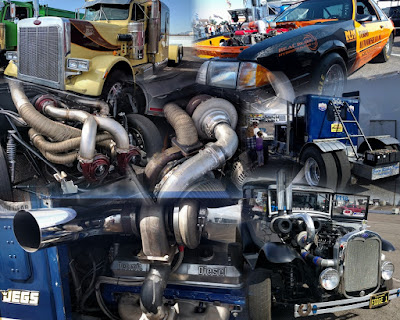 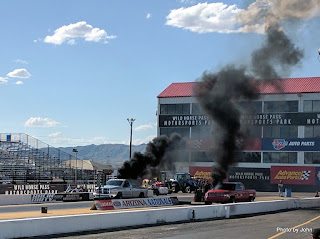 Saturday was dedicated to drag races. Wandering through the pits, it was interesting to see the variety of rigs. Everything from Model A running a Cummins with dual turbos and 4 wheel drive to old semi's set up for drag racing. For some reason, the Ford Mustang sporting a Cummins engine did not compete. 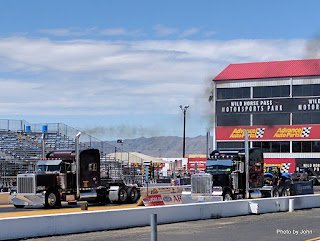 There was even a class for road-worthy semis. They tended to top out at about 80 mph in the quarter mile with lots of wasted time shifting...

Checked another thing off the list - camping at a race. I don't plan to submit this location to Campendium!
Posted by Just Finding Our Way at 2:30 PM