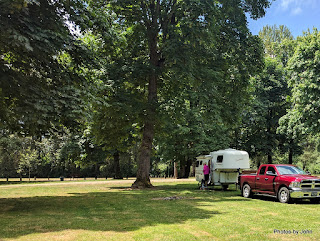 We spent a night boondocking in Brownsville's Pioneer Park so we could wander around town. A very casual operation with a field set aside for tent and RV camping. Totally unmarked - just pick whatever spot catches your fancy. If the host isn't around, you just stop by City Hall to pay the $15 fee. 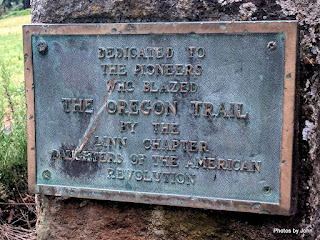 A lot of the little towns work hard to create a connection to the historic Oregon Trail. 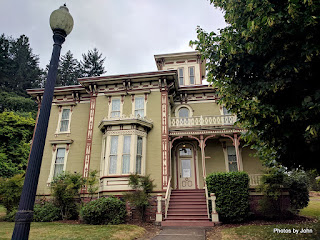 Historic houses vary from the well-kept or recently restored, to those that look like there's no possibility for revival. 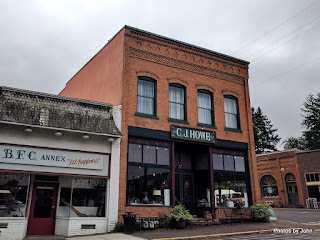 Lots of brick buildings with masonry effects to highlight their imposing presence. (The quilt shop was just down the street to the left.) 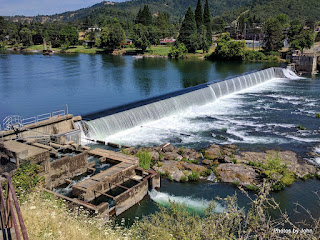 All of the towns highlight their connection to the rivers. The Umpqua was dammed in 1903 - this dam dates to 1916. 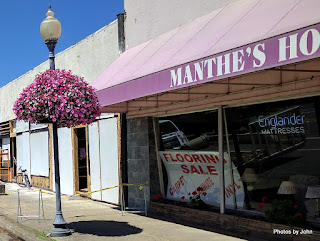 It seemed like lots of the little towns were in a contest to see who could get the most color on their main street. I'm not sure if the flowers were picked because of the building color or if it was just luck. The baskets of flowers were impressive! 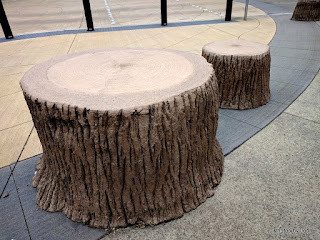 Roseburg has to get the nod for the most unique 'traffic calming' devices - concrete stumps! Elkton, however, one upped them by using concrete trees at the bridge coming in to town. 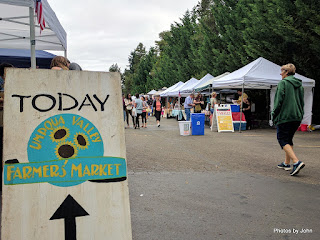 Farmer's Markets, both public like this one, and individual farm stores, were ubiquitous. The peaches were wonderful as were the tomatoes and zucchini. 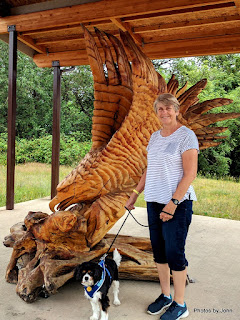 Turk didn't seem to be concerned at all about the eagle attacking the fish. I was really surprised that there wasn't any info to be found about the art or the artist. 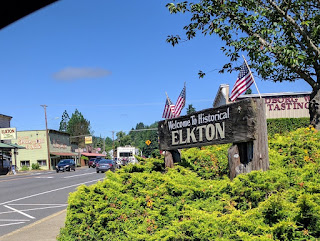 We took a day trip out to the ocean in search of fish and chips. We found the town of Elkton on the way, and almost stopped at the Pastry Mill but we'd already had breakfast and had other ideas about lunch. 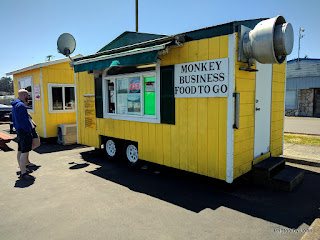 Monkey Business in Charleston had 5 stars from Yelp for their fish and chips. Unfortunately, the camera wasn't fast enough to get a picture of the product. Suffice it to say, we'd come back! 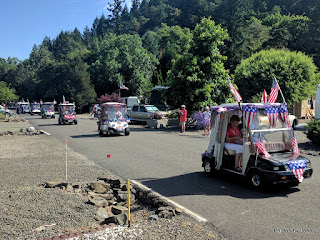 We spent a week at Timber Valley, an Escapees affiliated park. They had a parade of decorated golf carts to start off the 4th of July. 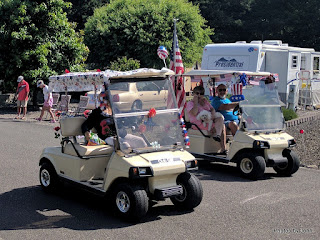 It appears that they also had golf cart drag races, but that wasn't on the schedule. This is the second Escapees park we've stayed at. They're different from one another but both are highlighted by friendly people.

With the holiday in the rear view mirror, it's time to move on.
Posted by Just Finding Our Way at 1:59 PM