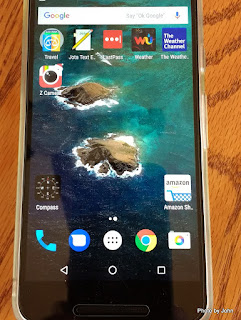 The new phone chimed last night with a notification that a new cache was published, not far from the house. As usual, I checked to see who and where before bolting out the door. This one had a few red flags flying. It was placed in an area that needed Park Supervisor approval but there was no mention of said approval. It came up as "disabled" but there was no log entry from the cache owner explaining the disabled status. The last flag was that the cache owner had fewer than 50 caches found, most recently over six years ago, and had never before placed a cache. 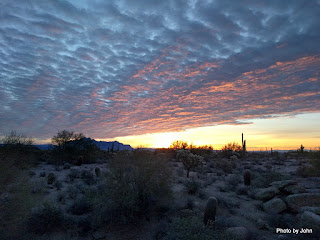 No sense going for a night hike with that many red flags, but since I only had one last chore to do before we headed off on a cruise, I decided the new cache would be a good excuse for a sunrise hike.

Since the GPS was already packed for the trip and I was too lazy to get it out, I decided to use my new phone, recognizing I didn't have any track record of its gps accuracy. 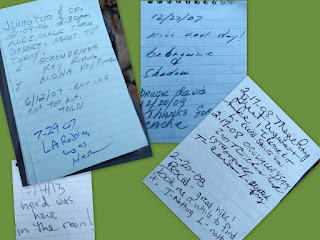 My phone's Ground Zero seemed to agree with the hint given in the new cache description but I didn't locate a cache at that location. There was similar location about 50' away so I checked that as well. I didn't find what I was looking for, but I did find a cache supposedly listed on a different website that hadn't been found since 2013. Meanwhile, the listing for the cache I'd been looking for was retracted. 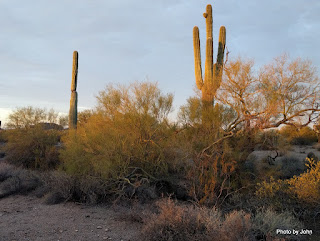 Not to worry. Any excuse for an early morning walk in the desert is a good excuse!

I got back to the truck just in time to get a message from a friend who needed a 'health check' on one of her caches. 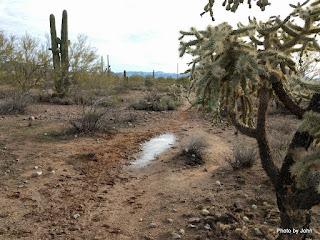 The resulting walk down a different trail was well worthwhile. It was there that I spotted that most elusive of desert phenomenon, a mud puddle!

Now it's time to go do that last chore.

The next step is to see how well the Google Fi phone works on our Panama Canal cruise. The blog will continue to autopost drivel on a weekly basis. One of these days we'll have some posts about the trip.
Posted by Just Finding Our Way at 11:06 AM